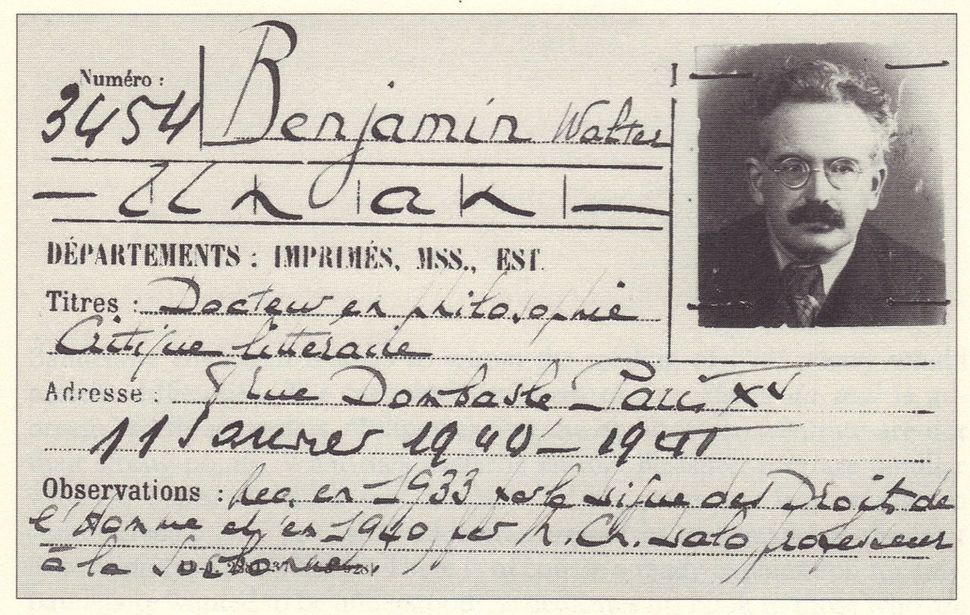 Writing in “The Work of Art in the Age of Mechanical Reproduction” Walter Benjamin quotes 20th century French director and film theorist Abel Gance as saying “Shakespeare, Rembrandt, Beethoven will make films . . . all legends, all mythologies and all myths, all founders of religion, and the very religions . . . await their exposed resurrection, and the heroes crowd each other at the gate.”

Well, since Benjamin’s suicide in 1940, he’s been among those heroes who “crowd each other at the gate,” and it was only a matter of time before he slipped through and became the subject of a film. As Deadline recently reported, Colin Firth and director Pat O’Connor have teamed up to make a film based on “Benjamin’s Crossing” a novel by Jay Parini. The story will focus on Benjamin’s last days before his suicide on the Spanish-French border. In 1940, after one last visit to his friend Bertolt Brecht and a brief incarceration in Burgundy, Benjamin found himself in Paris for the last time (it would, of course, be a year of lasts for Benjamin). His last days in Paris, and then after, are certainly dramatic enough for a film. First, with the world crumbling around him, he completes “Theses on the Philosophy of History,” one of his greatest works. Next, he escapes from Paris just a day before the Nazis occupy the city. Benjamin flees to Lourdes (the site of a major Roman Catholic Pilgrimage – the cottage industry around which Benjamin might have analyzed had he visited under more favorable circumstances) where receives a visa for immigration to the United States from Theodor Adorno and Max Horkheimer. Eventually, he meets Lisa Fittko (who should really have her own film), a Jewish partisan who spent the war guiding refugees over the Pyrenees, through ostensibly neutral Spain and then eventually into ostensibly neutral (for the other side) Portugal, from which they could receive safe passage to the United States or South America.

Benjamin and other refugees are able to successfully cross the Pyrenees with Fittko, but when they reach the town of Portbou, the party is held by the Spanish police who have recently been given orders by the Franco government not to honor transit visas made out in Marseilles. Rather than return to France and face arrest by the Nazi forces or the Vichy government, Benjamin overdoses on morphine tablets and takes his own life.

In the introduction to “Illuminations,” a book of Benjamin’s essays, Hannah Arendt writes, “During the night Benjamin took his life, whereupon the border officials, upon whom this suicide had made an impression, allowed his companions to proceed to Portugal. A few weeks later the embargo on visas was lifted again. One day earlier Benjamin would have got through without any trouble; one day later the people in Marseilles would have known that for the time being it was impossible to pass through Spain. Only on that particular day was the catastrophe possible.” It seems darkly fitting that Benjamin, whose life was marked by tragedy both of his own design and of forces outside his control, would die in such a fashion.

For those of us who love Benjamin and his work, the announcement is simultaneously worrying, exciting, and more than a little funny. Though Colin Firth has always been, if nothing else, competent, I always imagined that Benjamin would be played by Geoffrey Rush, if anyone at all (he’s too old for the role now, unfortunately). But casting aside, the project is worrying because nobody wants to a see a hero of theirs debased by what will likely be another in Hollywood’s unending string of mediocre biopics (with Raoul Peck’s forthcoming “The Young Karl Marx” there seems to be a trend developing. Perhaps next we’ll be treated to that Adorno and Horkheimer bromance comedy we never wanted).

An idealized Benjamin (biopics inevitably idealize, and thus, neuter their subjects) is a less interesting Benjamin. Yes, perhaps the movie will stimulate further public interest in his work, but there is an unavoidable, for lack of a better word, ickiness to seeing a thinker so strange, so brilliant, and so unique, reduced and refitted to the screen. This is not say that Benjamin is “larger than life” – no, in a lot of way, he was smaller than it – but rather to say that he was, first and foremost, a living person, and this fact is so frequently lost in biopics.

As for the comedy, well, Benjamin was preternaturally averse to “making a living.” After his aristocratic upbringing, he was constantly poor and consistently appealing to friends like Brecht and Gershom Scholem for help placing articles in journals and newspapers. As Arendt puts it, “No one, of course, was prepared to subsidize him in the only ‘position’ for which he was born, that of an homme de lettres.” Rather than come to terms with this fact, Benjamin persisted writing and struggling the only way he knew how. This does not make him a martyr (as I imagine the film version of Benjamin will be portrayed) – when it comes to work, he is more like Kafka’s “Hunger Artist” than anything else. It is funny that the life of a man so utterly terrible at making money should be turned into a money making venture.

There is another comedic aspect to the whole endeavor – Benjamin was one of the earlier thinkers to realize the radical potential of film and the revolutionary potential of mass media. He was, unlike his disciple Adorno, equally enamored with the lowbrow and the vulgar as the elite and esoteric – writing essays on things like Mickey Mouse and tacky antiques. In this regard, I almost hope that the forthcoming Benjamin movie is terrible – kitschy, hackneyed, cliched, overwrought, a recycling of all the worst Hollywood tropes. Benjamin had wanted to create a book composed entirely of quotes before his death (a project which has recently been brilliantly undertaken by Kenneth Goldsmith) – a film made up exclusively of scenes stolen from other films would be the perfect tribute, but I would settle for one that deals exclusively in cliches.

For this film to be at all interesting, it must fail, and it must fail in the right ways. So, I’m excited for the film, but only if it’s a complete disaster. Only if it fails to make money, only if it fails in any way to be original, only if the performances are unbelievable (in the negative sense of the word). Benjamin’s word’s on Kafka apply equally to himself – “To do justice to the figure of Kafka in its purity and its peculiar beauty one must never lose sight of one thing: it is the purity and beauty of a failure.”