This Artist Wanted Her Work Destroyed — Thankfully It Wasn’t 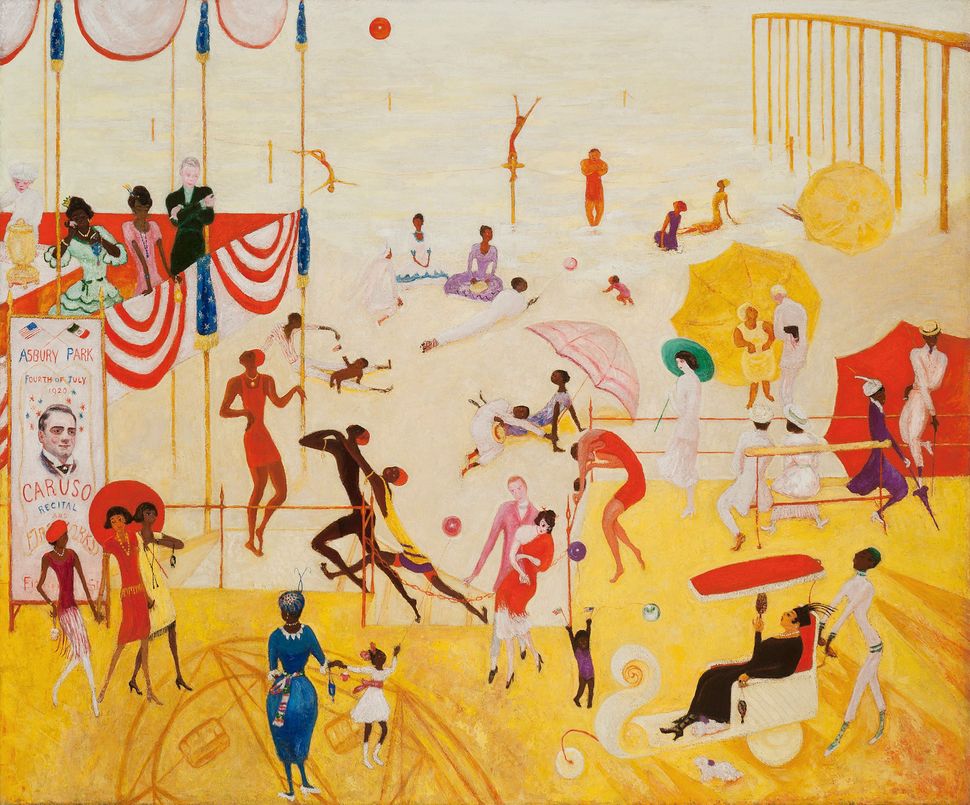 Florine Stettheimer Image by Courtesy of the Jewish Museum

‘Occasionally / A human being / Saw my light / Rushed in / Got singed / Got scared / Rushed out,” Florine Stettheimer once wrote in a poem titled “Occasionally.”

The full text of that poem, a lush yet minimal explication of what it feels like to be unknowable, occupies a final wall in The Jewish Museum’s new exhibit “Florine Stettheimer: Painting Poetry.”

For Stettheimer, the secret order of things was a constant subject, and a liberating one: She painted Marcel Duchamp sitting soberly in the company of his ephemeral pink-clad alter ego, Rrose Sélavy; a cautiously whimsical scene of herself seated against a tree, a blank-eyed faun on its other side, and a series of New York “cathedrals” —presented as flattened, hectic pastiches.

But “Occasionally” makes it clear that Stettheimer knew how her subjects, human and inhuman alike, possessed layers so deeply personal that they simply couldn’t be illustrated. Her paintings are technically skilled and exuberantly imaginative, but they’re also deceptive: Despite their frequent clamor, what they are depicting is not everything, but everything but.

Take, for instance, the portrait of Duchamp, who was friends with Stettheimer and her sisters, Ettie and Carrie. Painted on a sea foam-colored background, the work almost ostentatiously showcases facets of Duchamp’s identity. The artist sits in a chair patterned with his initials, which also march around the painting’s frame; a chess rook and a clock, mainstays of Duchamp’s imagery, seem to float in the background; Sélavy, petite and lithe, sits on a mobile pedestal that Duchamp operates from afar.

Yet aside from the slender mechanism connecting Duchamp and Sélavy, the links between the painting’s subjects remain obscure. Something in Duchamp is Sélavy, as something in him is the clock and the rook, but he is the only person who might ever understand what that means. 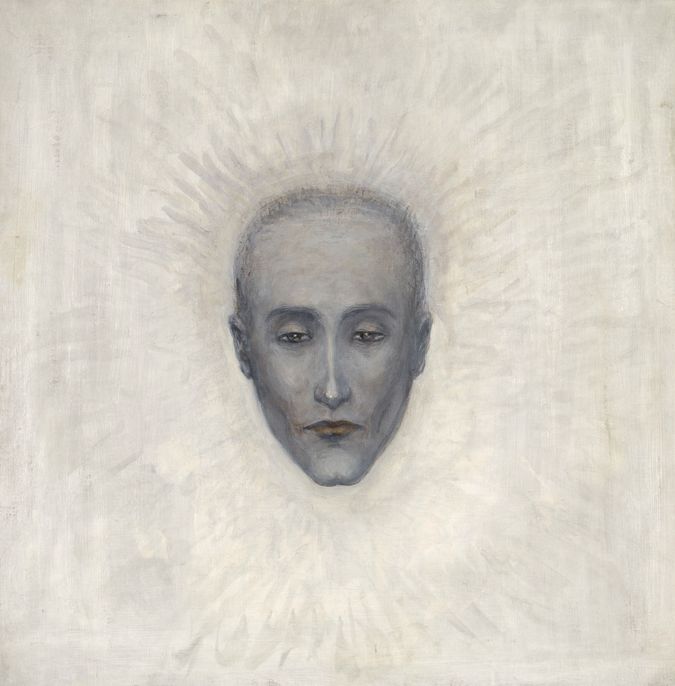 Stettheimer spent the first decades of her life moving between the United States and Europe; thanks to her mother’s independent inheritance, her family remained wealthy even after her father abandoned them. Stettheimer was educated primarily in Berlin, then trained as an artist in New York. During extensive travels in Europe before World War I, she found inspiration in a host of artistic trends then sweeping the continent.

Among those were the works of Gustav Klimt; an interest in Japanese art and design; German expressionism; surrealism, Dadaism, and the innovative aesthetic of the Ballets Russes. Back in New York after the outbreak of war in 1914, Stettheimer, then in her 40s, began focusing on portraiture.

In its traditional form, the New York art world didn’t take to Stettheimer. In her lifetime she had only one solo exhibit, a 1916 show that yielded unimpressed critics and unsold work. Instead of leaving the scene, Stettheimer glamorously expanded it. She and her sisters began to host “birthday parties” for her artwork, salons at which the upper echelons of New York society, artistic and otherwise, would view her newly completed works.

The Stettheimers’ gatherings attracted many artists, including Duchamp, Georgia O’Keefe, sculptor Elie Nadelman and painter Maurice Stern. Members of that crowd later cropped up in Stettheimer’s paintings, including “Studio Party, or Soirée” (1917–19), which depicts Stern and Leo Stein among artists and writers lounging in front of Stettheimer’s 1915 nude self-portrait “A Model.”

As curator Stephen Brown notes in a catalog essay, the writer and photographer Carl Van Vechten, an acquaintance and one-time subject of Stettheimer’s, wrote of a “very modern quality” unique to her work. “At the risk of being misunderstood,” he wrote, “I must call this quality jazz.” 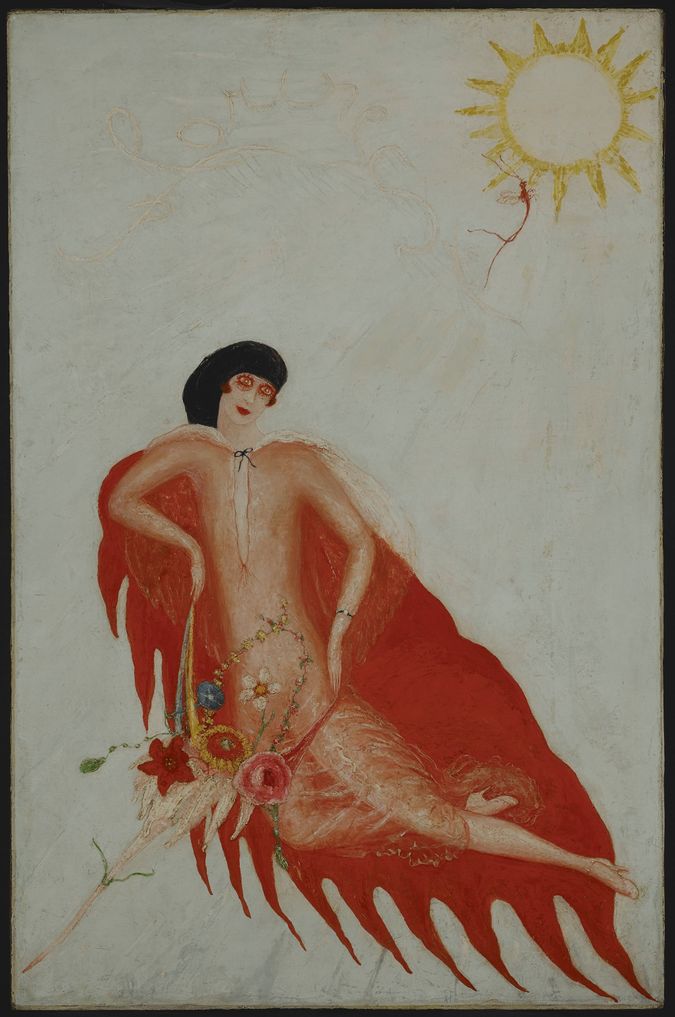 “Self Portrait,” by Florine Stettheimer Image by Courtesy of the Jewish Museum

That’s an astute accounting of Stettheimer’s work. Jazz embraces mutability: Listening to 20 saxophonists take on the same song, you can come away with a nuanced appreciation for what that song is, but you will never hear a version of it that is definitive. You’re not supposed to.

The last major section of “Florine Stettheimer: Painting Poetry” focuses on Stettheimer’s costume and set designs for the 1934 opera “Four Saints in Three Acts,” which featured a libretto by Gertrude Stein. The project recalled an earlier, unrealized venture into theatrical design, in which Stettheimer created extensive plans for a never produced ballet, “Orphée of the Quat-z-Arts.”

Yet the two works, separated by more than two decades, display marked differences in style. Stettheimer’s designs for “Orphée” were stylized drawings and collages, created with a clear eye for beauty. For “Four Saints” she created a series of rough, petite figures clad in carefully assembled costumes, their faces painted on as exaggerated childlike caricatures.

Those figures are the clearest expression of the unique aesthetic ideology that Stettheimer developed over her career. She could illustrate her own impressions of her subjects, but believed that trying to paint an essential truth about their character would be a useless fumble, of no more value than a face delineated with only the broadest necessary strokes.

As it turns out, Stettheimer was also strict about the extent to which she allowed anyone to try to understand her own character. She frequently painted self-portraits, evolving from the naturalistic to the surreal, which, like jazz, spoke to different facets of herself, but never to the whole.

In a conversation printed in the exhibition catalog, the Jewish Museum’s Jens Hoffmann commented that Stettheimer “wanted the works that remained in her studio to be destroyed after her death,” a wish that Ettie Stettheimer thankfully refused to grant. In making the request, Hoffmann wondered if Stettheimer was “engineering her own obscurity and myth to a certain extent.”

That’s one explanation. Another is apparent in some late lines of “Occasionally.” Her public face, the speaker muses, “is found modest / Even charming / It is a protection / Against wear / And tears.” The prospect of showcasing anything less than a finished work, anything in which wears and tears might be perceived, and overinterpreted, must have daunted her. An artist of the inexplicable, she may have felt she needed space in which to be inexplicable herself.

Talya Zax is the Forward’s culture fellow. Follower her on Twitter, @TalyaZax

This Artist Wanted Her Work Destroyed — Thankfully It Wasn’t