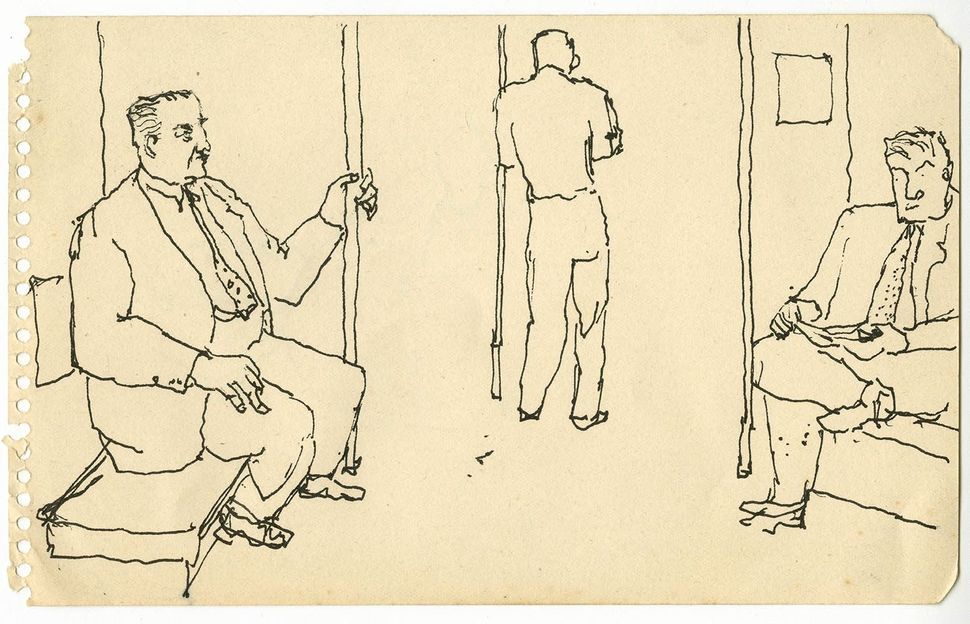 There are a few common descriptors (or criticisms, however you want to read it) for the work of Jewish-American artist Alex Katz – that it’s flat, cartoonish, pop-artish but not in the intellectual (pseudo or otherwise) vein of Warhol and his ilk. These criticism-descriptions all seem fair, but I can’t help but think that, when levied purely as criticism, people are missing something. Yes, Katz’s work is flat. Yes, it is weirdly cartoonish. Yes, it is kind of like pop art but without the pretension. But the thing that seems to sometimes get lost in the conversation, the thing that struck me years ago when I first saw the “Provincetown” series (if I remember correctly – juxtaposed, fittingly, with Hiroshi Sugimoto’s “Seascape” photographs), is the unsettling quietness of his work. Even the portraits, even the ones in which the sitter’s face takes up almost the whole canvas, even the uncomfortably close ones, feel more like still lifes than portraits to me. There’s something – dead is the wrong word – but frozen, Stepford-like to his oeuvre. I suppose the buttoned-up WASPy suburban surreality of John Cheever is a good literary analogue. It’s nice – but something isn’t quite right.

Currently, there’s an interesting show at the Timothy Taylor 16×34 Gallery in New York of Katz’s early drawings – giving us an insight into the formation of his later works. The show, “Alex Katz: Subway Drawings,” is, per the exhibition text, a collection of “the artist’s notebook drawing from the 1940’s…the first time 52 of these drawings are brought together in an exhibition.” While Katz was studying as an artist as Cooper Union from 1946-1949, the exhibition text tells us, he was bored or dissatisfied with the models of the figure drawing studio. Instead of filling his notebooks with studio models, Katz opted to ride the subway, sometimes “into the early hours of the mornings,” and sketch the people and scenes he saw on his rides. The resulting sketches are at once dynamic and, in that classic Katz fashion, weirdly quiet.

First the dynamism. Unlike Katz’s paintings, these drawings are loosely constructed – the lines of their creation are still visible, faces go unfinished, the backgrounds sparse, if they exist at all. It’s as if the drawings have either just begun to materialize or, as the stains and ripped edges might suggest, just begun to decay and disappear. 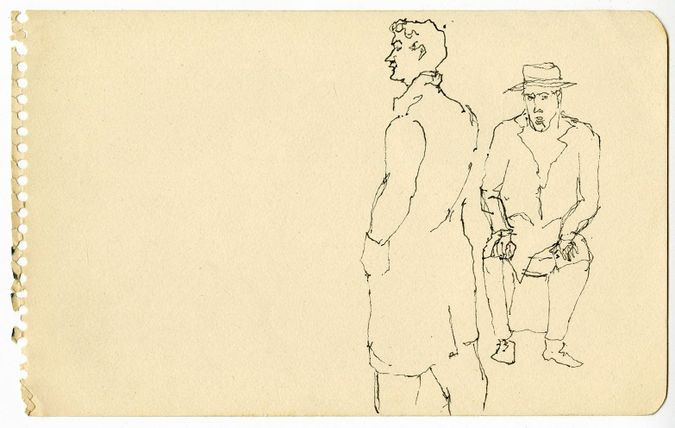 In this regard, there is perhaps a slight sense of movement to the drawings – the lines squiggle, the people who populate the subway are both literally and, in the aforementioned disappearing-materializing sense, in transit.

But, any sense of movement or dynamism one might get from these drawings is outweighed by the sense of isolation and quiet. The group drawings are by and large more interesting than the solo portraits, and it is here that the effect is at its most visible. In one, “Two Men,” two men are depicted, one standing one sitting, one in profile, one head on. There is no background and we are left to imagine the space they inhabit – if indeed they inhabit any space at all. 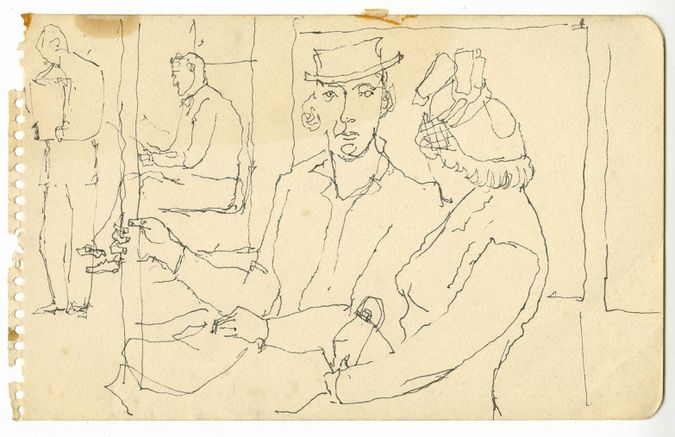 In another, “Subway Scene Couple,” the background is more fleshed out – we have seats, a pole. But the spacing is strange – the pole is too close to the seated passengers in the foreground, the background figures seem so remote that they may as well be in a different train, until, that is, we notice the seated background figures’ feet, themselves too small, dangling by the pole. Each figure, the program points out, is isolated – “there is a sense that the subjects, despite sharing a subway car, were never present in the same space or at the same time.” The isolation, I think, is a correct observation – even the couples in conversation are silent and, insofar as this can pertain to a drawing, somehow psychologically two dimensional. But the passengers are present in the same space at the same time – and this is what makes these drawings so mutely surreal. There is an almost kafkaesque suspension of time, space, and individuality here – distances shrink and stretch, faces are blank, the trains are populated by doubles and featureless ciphers.

The project is, in a sense, documentarian in a similar way to photographer Walker Evans’ superb “Subway Portraits,” shot via a hidden camera around the same time as the Katz drawings. Despite the featurelessness of the trains and their passengers, we do still get a sense of the time – suits, dresses, hats, the odd t-shirt, newspapers and books instead of phones. Even the relative emptiness of the trains harkens back to the time of a slightly less crowded and dense New York. And yes, it must be said that these drawings were made on the fly – work too slowly or concentrate on the wrong detail and the scene is gone, departing the train at 86th Street or some such station. So it would seem that they are unfinished and blank and silent and surreal more out of necessity than any aesthetic concern. 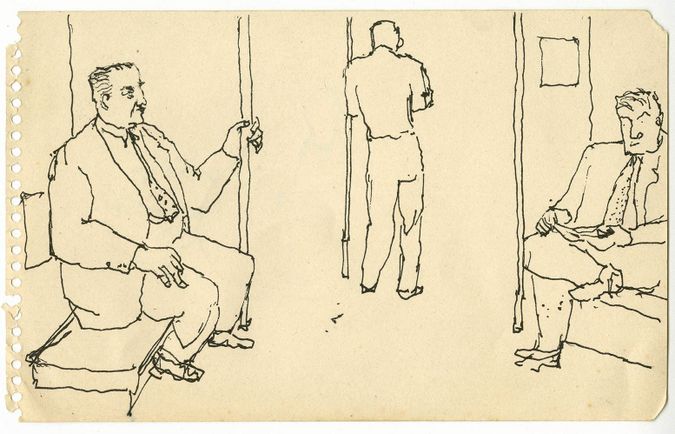 That being said, the viewer is given these drawings in their final form, and so, for us, they’re finished – the surreality remains. And it is this surreality that makes the strongest case, I think, for the documentary importance of the drawings. Whereas Evans’ project was perhaps more anthropological than anything else, Katz’s drawings capture something of existential importance. Trite though the observation may be in this day and age, Katz’s drawings do, on both a metaphorical and literal level, capture the loneliness, the strangeness of city life. They capture the anonymity, the way people leave half-finished dissipating impressions on our consciousness. They capture the frustrating physical existence of the subway, how it can take an eternity to go from one end of the train to the other during rush hour, how on an almost empty train any other physical presence is at once in another world and uncomfortably close.

In a text titled “Reading Promotional Art,” Katz writes “Interesting paintings are sensed quickly and then they become very ‘slow’.”It seems truer here than elsewhere in his work. These drawings are indeed sensed immediately, and on the surface level, they’re nostalgic, elegant in an old world sort of way. But, slowly, their inner uncanniness reveals itself – and they open up worlds both past and not quite our own.