Revisiting Tony Kushner’s ‘Angels In America’ In The Trump Era 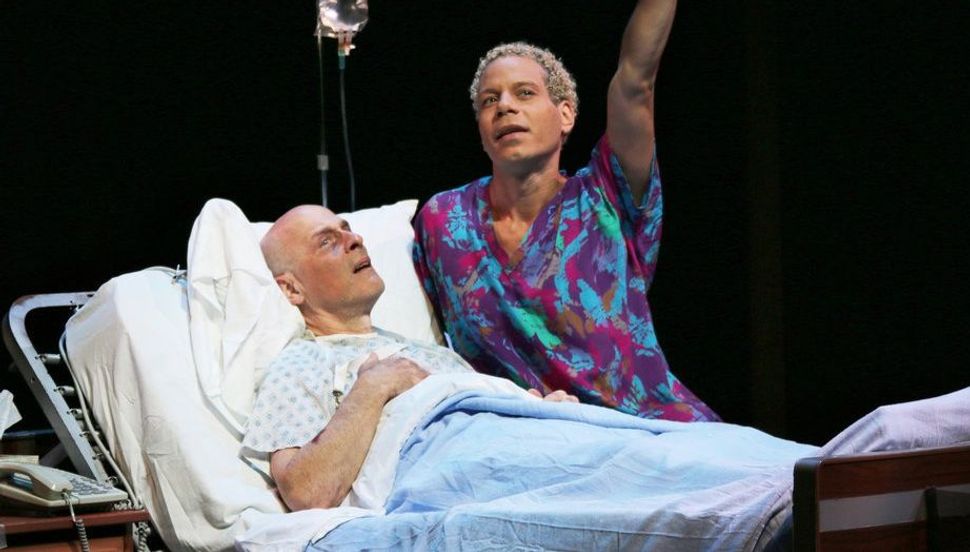 ‘Angels in America” is a play of its time and for ours, too. Tony Kushner’s magnum opus — currently in revival at London’s National Theater, and due in movie theaters here this July — is appropriately apocalyptic, informed by an impression of impending catastrophe. “History is about to crack wide open,” Ethel Rosenberg warns Roy Cohn as he makes the case for his own immortality. “Millennium approaches.” When the angel draws near toward the end of part one, an apparition sighs: “The 20th century. Oh, dear, the world has gotten so terribly, terribly old.”

AIDS is the upheaval, the specter, at the center of the play — or rather, this gay fantasia on national themes, to borrow the subtitle — set in the mid-1980s and written by Kushner from the vantage of a few years thereafter. It is a plague that at once has the power to cut down people in their prime and tear apart relationships that once seemed stable, to test the very definition of love. But “Angels” is also about everything, and thus its ire and angst are sprayed across two plays and seven and a half hours like bullets from an automatic rifle.

There is a looming environmental catastrophe. There is a rightward shift in the American political culture that is spoken about as if it were intractable, an unstoppable revolution. There is also racial politics, not only the relationship between white and black America, but also those groups’ respective relationships with America itself, as embodied in the arguments and conflicts between Louis and Belize, a former drag queen and registered nurse, respectively, the latter of whom has some of the best lines on this subject:

Well I hate America, Louis. I hate this country. It’s just big ideas, and stories, and people dying, and people like you. The white cracker who wrote the national anthem knew what he was doing. He set the word “free” to a note so high, nobody can reach it. That was deliberate. Nothing on earth sounds like freedom to me.

In the figure of Roy Cohn, played to eleven in the London revival by Nathan Lane, there is the embodiment not only of a rot at the core of American life, but also a symbol of the right’s marginalization and demonization of gay men — by, in this case, someone who was himself gay. The devil has all the best tunes, and thus Cohn delivers one of the great and most revolting monologues of the play, when his doctor tells him he has AIDS. “Your problem, Henry, is that you are hung up on words, on labels,” he says: Like all labels they tell you one thing and one thing only: Where does an individual so identified fit in the food chain, in the pecking order? Not ideology, or sexual taste, but something much simpler: clout.… Now to someone who does not understand this, homosexual is what I am because I have sex with men. But really this is wrong. Homosexuals are not men who sleep with other men. Homosexuals are men who in 15 years of trying cannot get a pissant anti-discrimination bill through City Council. Homosexuals are men who know nobody and who nobody knows. Who have zero clout. Does this sound like me, Henry?

I’ve gotten this far without having to or attempting to say anything about what actually happens in “Angels in America.” It’s a play so vast that it eludes summary. As Christopher Hitchens wrote just before the first half of “Angels,” “Millennium Approaches,” came to Broadway in 1993, “It’s effectively impossible to spoil the plot by disclosing what it’s all ‘about.’” Hitchens mentions “Mormon pioneers, Bolsheviks, Reagan-era mendacities and heavenly intercessions,” though that’s only the half of it.

“Angels” is at its best when the action examines human relationships: the betrayal of Prior, the AIDS sufferer, by his boyfriend, Louis; the tension between Louis and Prior’s ex-lover, Belize; the breakdown of Harper and Joe’s marriage; Louis’s desperate fling with the enraptured Joe, and the father-son bond between Joe, a legal clerk, and Cohn, his mentor. These relationships are the play’s foundations and its life. The split scene at the end of Act 2 of “Millennium Approaches,” when Harper takes flight from Joe, and Louis basically abandons Prior to die in a hospital bed, is fast and furious and crackles with passionate intensity.

It is for this reason that “Millennium Approaches” remains superior to part two, “Perestroika.” The former somehow manages to be a play about politics, faith and ideas while feeling taut, focused and, above all, human. During the latter, with the arrival of the angels, the whole thing is blown apart and the wheels totally fly off. It is a behemoth, roaming around in search of something to hold it in and give it meaning. The angels themselves, in fact, are the least interesting and often tedious and didactic part of the whole theatrical affair.

The angels of “Angels in America” foreshadowed an unfortunate trend in American playwriting itself. Perhaps it had to do with the instantaneous canonization of “Millennium Approaches,” including by Harold Bloom, but American playwrights by and large have taken leave of straight realism. It is as if realism cannot contain all that these authors have to say about America and, for a play to be considered serious and important, it must in some way play with the supernatural and the superstitious.

Helen Shaw, writing for American Theatre, also observed this shift in American playwriting. “It’s almost rare to see an important piece that doesn’t hint at strange forces gathering, that doesn’t stretch its hands out to the supernatural, that doesn’t use realism for non-realist ends,” she wrote. Shaw points to “Tracy Letts’s use of the near-silent Cheyenne housekeeper in ‘August: Osage County,’” but consider, too, that the great American play of last year, Stephen Karam’s “The Humans,” couldn’t resist playing with phantoms to create an unsettled atmosphere. “Angels” didn’t start this trend, but it surely gave it an unwelcome boost.

“Angels” has other problems, too. It indulges, through the characters of Harper and Prior, in the theatrical trope that those who are sick are more alive and more lucid than those who are well — that they are somehow closer to the truth, living on the “threshold of revelation.” It’s also unclear whether Kushner knew in the end how to finish “Perestroika.” Ultimately, the epilogue during which the remaining characters one-by-one break the fourth wall and join in an address to the audience feels forced, awkward and unsatisfying.

Perhaps in a play this broad and deep, the bad should be accepted as a partner to the good, for there is still much to be admired in a piece of theater that encompasses so much, “a huge diorama onto which to project American discontents,” as Hitchens described the individual plays. “Angels” sheer enormity is enveloping, and in the hands of the director, Marianne Elliott, the revival of “Millennium Approaches” in particular has a wonderful flow and rhythm about it. Maintaining a pace without destroying the mood is essential in a play as rangy and, frankly, long as “Angels. ”

Elliott’s revival, for all its high seriousness, also highlights how fantastically funny and biting “Angels” is, an important corrective to the well-acted but unimaginatively adapted and pretty staid 2003 HBO miniseries. As performances go, Denise Gough as Harper and Nathan Stewart-Jarrett as Belize make a tremendous impression. The star attraction here, aside from the inimitable Lane, is Andrew Garfield as the afflicted Prior, whose attempts at camp and tendency to scream his lines rather than act them proved, over time, less than endearing.

After two plays, six acts, and seven hours and 40 minutes of theater, what are we left with? “The Great Question before us,” the creaking, decrepit Aleksii Antedilluvianovich Prelapsarianov says in Perestroika’s opening monologue, “is: Are we doomed?” If there is any solace for the contemporary observer in “Angels,” it is that even as things fall apart, all hope is not lost. “The world only spins forward,” Prior, living with AIDS for five years by the play’s end, tells us directly, while Harper, on her night flight to San Francisco on a quest for a fresh beginning, concludes: “Nothing’s lost forever. In this world, there is a kind of painful progress. Longing for what we’ve left behind and dreaming ahead.”

“Angels in America” will be broadcast to cinemas internationally via NT Live; part one airs July 20 and part two on July 27

Revisiting Tony Kushner’s ‘Angels In America’ In The Trump Era