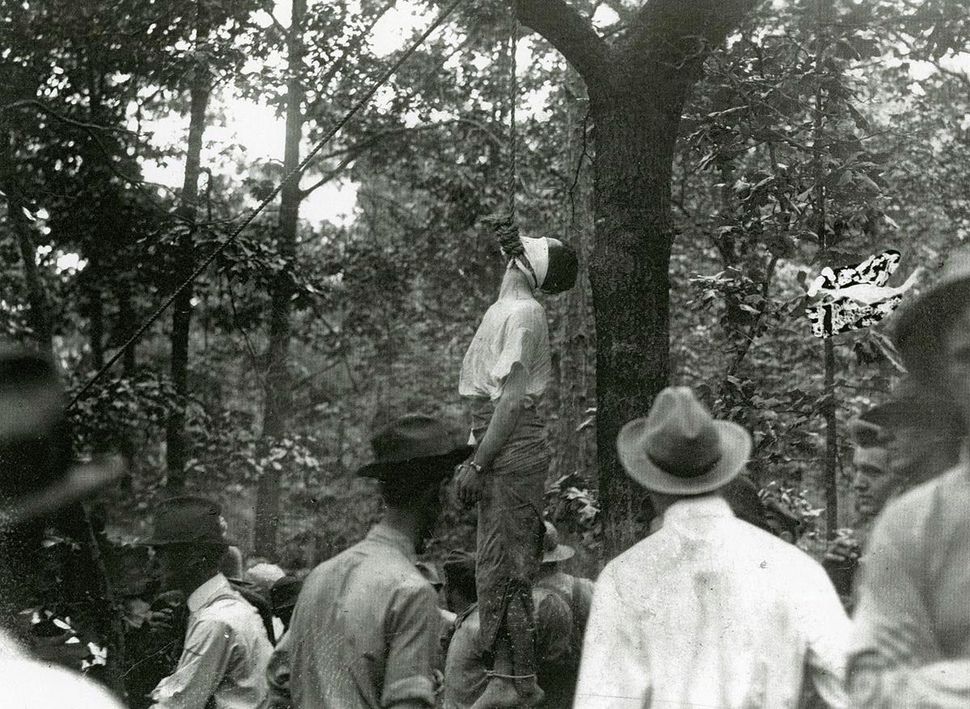 The Leo Frank case, a century old now, seems like an unlikely subject for a musical. Nonetheless, in “Parade” Pulitzer Prize winning playwright Alfred Uhry and composer Jason Robert Brown took on the story of the northern Jew who was accused of murdering Mary Phagan, one of the young employees of the Atlanta pencil factory he managed.

After the governor of Georgia commuted his sentence, Frank was lynched by a mob of angry Atlantans. This incident inspired both the revival of the Ku Klux Klan and the strengthened commitment of Jews to civil rights, since they’d lost one of their own.

The difficulty of the Frank case is that the jury’s decision hinged on the testimony of James Conley, a black janitor who was the only other person in the factory the day of the murder. Once the trial became national news Jews from New York and Chicago descended upon Atlanta to argue for Frank’s innocence. In the crudest terms, the murderer was either the black guy or the Jewish guy.

When “Parade” opened at the Writers Theatre in Glencoe, a northern suburb of Chicago, the Nation of Islam e-mailed a series of articles to members of the press, including me, that argued that the play was anti-black propaganda and urged us to check out its own book on the case, “The Secret Relationship Between Blacks and Jews, Volume Three: The Leo Frank Case, The Lynching of a Guilty Man.”

When I called the Nation of Islam to ask more about its arguments, no one seemed to know who was responsible for the e-mails. The theater’s artistic director said he hadn’t heard from the Nation of Islam directly and that the NOI didn’t seem to be planning any further action. I was still curious, though, about why the question of Frank’s guilt still resonates a century later, so I got in touch with two people who have studied the case intently: One was Jeffrey Melnick, a professor at the University of Massachusetts-Boston and author of “Black-Jewish Relations on Trial: Leo Frank and Jim Conley in the New South.” The other was Steve Oney, a journalist whose book “And the Dead Shall Rise: The Murder of Mary Phagan and the Lynching of Leo Frank” is considered the definitive history of the affair. Here’s what they had to say:

Jeffrey Melnick: I’m clearly in a strange position of agreeing with a lot of what the Nation of Islam has to say about how mainstream entertainment industry Jews are interested in the Frank case in our time. There’s an older tradition of film and literary musical artists who want to complicate how we tell the story, but Uhry’s not that kind of guy. Think about his most famous work, “Driving Miss Daisy.” It’s about the love between a black servant and his older Jewish employer. Uhry has romantic, nostalgic ideas of Southern Jewish culture. I’m pretty critical of him. But the Nation of Islam has a different audience they’re trying to reach. It’s worth thinking about who they’re talking to.

They say this really great thing about how Frank has been used, how Frank has been picked up as this 1915 Jewish martyr who then we used to read backwards into Southern history to say Jews have always been in parallel position to African-Americans. It’s not a defensible story. As a Jewish-American raised on stories of victimhood and vulnerability, I recognize the way these stories are used for sympathy. The Frank case is a zero-sum battle. If Frank didn’t do it, someone black had to do it.

There’s at least one movie and one novel where the authors go for a third man, a white, non-Jewish character to blame it on. That’s the only way out, because otherwise it’s Frank versus Conley. One thing the Nation of Islam is making clear is that Jews understood that and organized around that. It was Jews all along the [sociopolitical] spectrum. [Forward publisher] Abraham Cahan went to Atlanta to interview Frank in jail. He didn’t jump in on the racist rhetoric, he was saying [Frank] probably didn’t do it while also making it clear that Frank wasn’t the kind of Jew Forward-reading Jews would recognize. He was German and college-educated.

Ultimately the Nation of Islam doesn’t care whether Leo Frank or Jim Conley did the crime. What they’re really talking about is who’s a natural ally, who’s on your team. When push came to shove, the Jews made it really clear they put ethnic affiliation above the alleged Jewish concern with justice. The Nation of Islam is saying, “We have to stick together. When it came down to a black versus a Jew, look at how the Jews acted. Take that as a cautionary tale.” But the Nation of Islam goes places that are harder for a historian to support.

Steve Oney: Unfortunately we’ve entered an era in our life as a society where facts are rarely agreed upon. Leo Frank was convicted and sentenced to death. The verdict was upheld by the US Supreme Court. The governor of Georgia commuted Frank’s death sentence. Over the decades, the weight of history has confirmed [the governor’s] view that Frank was most likely innocent and Jim Conley murdered Mary Phagan. Was the case divisive? Yes, as all get out. It was a trial run for the kind of societal disagreements that now wrack our world.

Jim Conley had a history of crimes against women before and after the murder of Mary Phagan. He was convicted as an accessory [to the murder] after the fact and served one year at a work farm. Within months of attaining his freedom, he was arrested several times for battery and assaults on women. He was a very smart guy, but he was violent and had a history of violence against women. The murder of Mary Phagan fits into the pattern of his behavior. Even the physical evidence places the crime at Jim Conley’s doorstep. [But] he convinced an all-white jury that a white man had killed this girl, a white man he worked for. Others take the side that, considering the racism of the time, Conley had to be telling the truth. It’s Byzantine as can be. I have to weigh those remarks. What I tell you is based on a lot of experience and a lot of time pondering it and a lot of research.

The Frank case has so many polarizing elements: religious, racial, gender, class. It’s one-stop shopping for all the things your parents told you not to talk about in company. Mary Phagan was an oppressed worker, a child laborer toiling for pennies an hour in a sweatshop. Leo Frank was an oppressive capitalist industrialist. Jim Conley was a black witness against a white man living in the Jim Crow south in a time when life was hard for all blacks. Frank was a Jew and excited an anti-Semitism he didn’t know existed.

The Jewish community during the actual trial did try to exonerate Frank based on his Jewishness. There were debates between the ADL and American Jewish Committee on how the Jewish community should handle the case. The debates between the leaders were quite fascinating. Adolph Ochs of the New York Times sent a reporter to Atlanta and got involved in advocacy journalism. It upset a lot of people who believed Frank was guilty and Southerners who felt the Northerners were meddling. They didn’t know there was going to be such a backlash.

“Parade” is a dramatic work. Uhry took dramatic license to bring the story to life. It’s a play. It’s not a history. It’s a play based on facts. I don’t think Alfred Uhry would tell you it’s the truth. It’s the truth as they see it, as they dramatized it.

I haven’t read the book the Nation of Islam put out. When I wrote my book, I thought, I’m going to try to discover through reporting and research what happened. I’m a little impatient with people who begin by imposing a point of view. I was more interested in answering a harder question: What happened? Why did it get out of hand? I wish all propagandists would cool down on almost every subject and ask, “What happened?”