The Secret Jewish History Of 7-Eleven 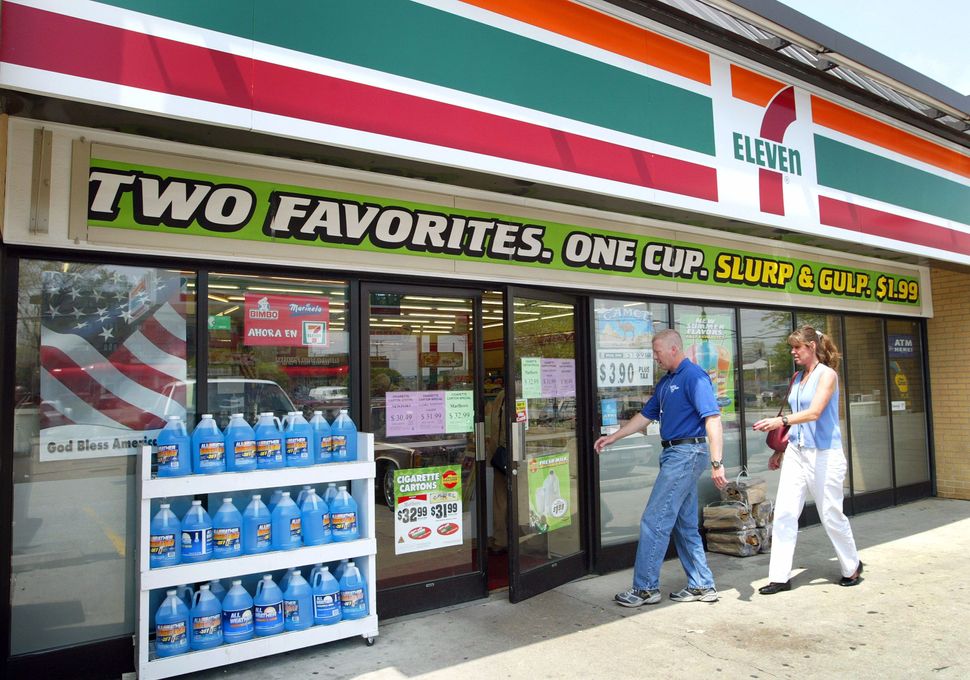 When you walk into your local 7-Eleven today to get your free Slurpee — this being July 11, or 7/11, or, as it is celebrated everywhere, “7-Eleven Day” — consider for a moment that the convenience the store brings is based upon gematria, or the hidden meanings of numbers in Judaism.

Everyone knows the meaning of the number seven — it’s the divine number of completion, given that God created the Heavens and the Earth in seven days. Actually, he worked at it for six days, and rested on the seventh, but who’s counting? In any case, a week has seven days because of what God did, and the seventh day is the Sabbath, the most holy day of the week. The great 20th century Jewish thinker Abraham Joshua Heschel dubbed it Judaism’s “cathedral of time.” (It isn’t known for sure if Heschel ever entered a 7-Eleven store.)

Eleven is an equally mystical number. Every religious school graduate (except those who attended my religious school) knows that 11 equals five books of Torah plus six books of Mishna. That’s a lot of reading, and it helps if there is a 7-Eleven across the street from where you live, so you can spend less time shopping and more time studying Torah.

Eeveryone also knows about the ten sefirot – the ten vessels of divine light that infuse the world. By channeling this divine energy we repair the universe – hence, tikkun olam. What isn’t commonly acknowledged is that there is also an eleventh sefirah — Da’as Elohim, or Godly knowledge. It’s the culmination of all the sefirot. Imagine firing all 10 cylinders of the engine of sefirot — collectively they bring about a transfer of energy into a transcendental state. Like nuclear fission, except not.

What is amazing about all this is that after the chain of Dallas-based Tote’m convenience stores changed its name to 7-Eleven back in the 1940s, they also decided to open the stores bright and early at 7am and remain open until 11pm. How convenient was that?

7-Eleven was so successful by the 1960s that it never needed a celebrity pitchman or pitchwoman. It did, however, sponsor a professional bicycling team that rode in the Tour de France, the Olympics, and the Coors Classic, aka the American Tour de France. And the champion of that team was the Queens, N.Y. native Doug Shapiro.

Shapiro, who was nicknamed “The Bullet,” began his competitive cycling career at age thirteen — better known to you and me (and Doug’s parents) as bar mitzvah age. An interviewer from a Jewish magazine once challenged Shapiro to recite the Four Questions in Hebrew, and he acquitted himself flawlessly. Shapiro once told another interviewer, “In [the] 7-Eleven [Cycling Team], it was very American. Everyone thought that they were the leader.” Sounds like a minyan I once attended.

Shapiro was eventually inducted into the Cycling Hall of Fame, as well as the Jewish Sports Hall of Fame, located somewhere out on Long Island. But don’t go looking for it; it’s so small it doesn’t even show up on Google Earth.

Incidentally, another interviewer once asked Shapiro if the members of the 7-Eleven team got free Slurpees. The answer was yes, and they didn’t even have to wait for July 11. “We all received gift cards for 7-Eleven, and this was in the days before gift cards,” said Shapiro. “We could use them on anything in the store, including gas.” (Hence my firing on all 10 cylinders analogy.)

There is a lot of Talmudic discussion online (and perhaps in yeshivas, but I can’t say) about which flavors of Slurpees are kosher and which are not. I am not qualified to comment definitively on the matter – or any questions of kashrut – so if you have questions concerning that issue, please consult your rabbi.

(Undoubtedly some of you are also waiting for me to note that 7 and 11 are both prime numbers, but I’m not going there because it proves absolutely nothing.)

And yes, there are 7-Eleven stores in Israel. Which of course means there are a few folks out there who want you to boycott the chain.

Seth Rogovoy is a contributing editor to the Forward. He writes frequently about the intersection of Jewish themes and popular culture.

The Secret Jewish History Of 7-Eleven