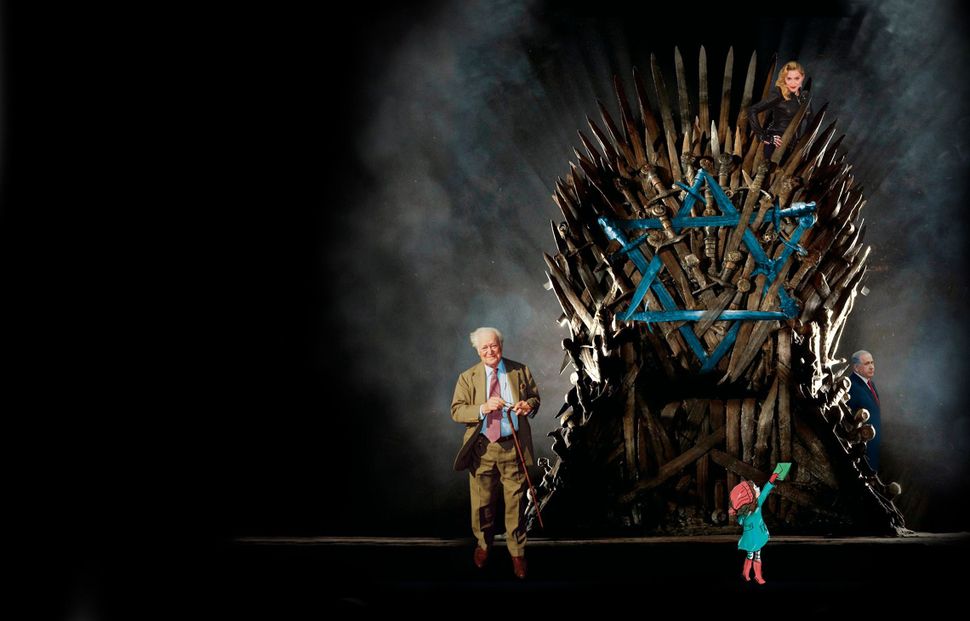 “Game of Thrones,” the popular medieval fantasy series that one of its creators describes as “‘The Sopranos’ in Middle-earth” — a reference to that other medieval fantasy saga written by a guy with too many R’s in his name, JRR Tolkien’s “Lord of the Rings” — is full of intrigue and drama, as well as plenty of sex and violence. One could say it is nearly biblical in its proportions. And in fact, the show, whose seventh season premieres on Sunday on HBO, has more than a few connections to the people of That Book.

1. In fact, George R.R. Martin, the author of “A Song of Ice and Fire,” the series of books that provides the show’s immediate source material, claims that his imaginary saga set in the mythical land of Westeros is itself based on “The Accursed Kings” by French-Jewish author Maurice Druon. Druon was the son of the Russian Jewish immigrant Lazare Kessel and the nephew of the writer Joseph Kessel, with whom he translated the “Chant des Partisans,” a French resistance anthem of World War II. Druon’s seven-part saga, set in medieval France, chronicles the struggle for the French throne in the early part of the 14th century, leading to what became the Hundred Years War. “‘The Accursed Kings’ has it all,” Martin wrote in an introduction to the recently reissued translation of the French cult novel. “Believe me, the Starks and the Lannisters have nothing on the Capets and Plantagenets. It is the original game of thrones.”

2. In 1995, while earning his master’s degree at Trinity College, in Dublin, David Benioff met fellow American Jewish student D.B. Weiss, a former Hollywood personal assistant who had dabbled in writing screenplays and, like Benioff, was studying Anglo-Irish literature. The two hit it off, and over the years they worked together on screenplays. When they stumbled upon Martin’s fantasy saga, they knew they had found the makings of a TV series. The rest, as they say, is “Game of Thrones.”

3. In 2006, Benioff married Hollywood actress Amanda Peet, who has a Jewish mother and a Quaker father, in a traditional Jewish ceremony. Last year, Peet co-wrote “Dear Santa, Love, Rachel Rosenstein,” inspired by a disappointing outing shopping for Hanukkah gifts with a friend in Belfast, Ireland, where “Game of Thrones” was filming at the time. There were no dragons in the book, however.

4. When you’re watching the upcoming season, look closely and see if you can spot the two Israeli actors who have been added to the cast. Ania Bukstein is well known in Israel for TV and film appearances in “Rabies,” “False Flag” and “The Secrets.” Yousef Sweid, an Arab-Israeli, has appeared in “Homeland,” Showtime’s CIA drama with Israeli origins, and in stage plays, including “Walk on Water.”

5. Set locations for season 6 included the legendary kabbalistic city of Girona, which boasts one of the most well-preserved and beautiful Jewish quarters in Europe. In the 12th century, this Catalan city had a thriving Jewish community that supported Moshe ben Nahman Gerondi — better known as Nahmanides or Ramban — who was appointed the great rabbi of Catalonia. As in most parts of the region, the presence of the Jewish community came to an end in 1492, with the Spanish expulsion of the Jews. Today, the Jewish ghetto of Girona is a major tourist attraction. On the north side of the old city is the Montjuic — or hill of the Jews in medieval Catalan — the site of the well-preserved Jewish cemetery.

6. Madonna, perhaps the world’s most famous “follower of Kabbalah,” whatever that means, drew a connection between the biblical figure of Esther, the hero of the Purim story (and presumably Madonna’s personal hero, since she adopted the name Esther as her “Kabbalah name”), and the feminist hero of Game of Thrones,” Daenerys Targaryen, aka the Mother of Dragons. Madge attended the Kabbalah Centre’s annual Purim party last year costumed as Daenerys. Like Esther and Madonna before her, Daenerys starts out as a quiet, meek teenager before finding inside herself reserves of ruthless power and strength she never imagined.

7. Comparing real-life battles to “Game of Thrones” has become an easy go-to for commentators, pundits and pols alike, and Israeli Prime Minister Benjamin Netanyahu is not immune to the lure of an easy metaphor deprived of pop culture. During his unusual and controversial address to Congress early last year, Netanyahu referred to the rise of the Islamic State group and to its battle with Iran as a “deadly game of thrones.”

8. “Of Kings and Prophets,” the short-lived ABC TV series based on the Book of Samuel I, which tells the story of King David, was overtly marketed as “a biblical ‘Game of Thrones.’” The show was “a faithful translation, inspired by Samuel I, of one of the great stories of world literature,” according to Chris Brancato, co-executive producer. “It’s suspenseful. It’s extraordinarily violent. It’s sexual. It’s one of the world’s first soap operas. And it’s a power struggle between two men. We’ve sought to make the show modern.… This is a non-dragon version of ‘Game of Thrones.’” The original story, of course, packs plenty of sex, violence and drama, as David is one of the more extroverted characters in the Torah, remembered especially for antics reminiscent of a rock star, including public nudity, fornication and cuckoldry.

9. And in a final sign that “Game of Thrones” and its secret Jewish history have found a permanent place in our establishment culture, American Jewish University in Los Angeles now offers a course called “Game of Thrones in the Bible: Kings & Queens, Duty & Love, Truth & Corruption,” taught by Rabbi Richard Camras of Shomrei Torah Synagogue in West Hills, California.

Seth Rogovoy is a frequent contributor to the Forward and mines popular culture for its most unlikely Jewish affinities He is the author of “Bob Dylan: Prophet, Mystic, Poet” (Scribner, 2009) and is currently writing a historical novel called “Rockin’ the Shtetl,” based on the life of Elyokum Zunser.