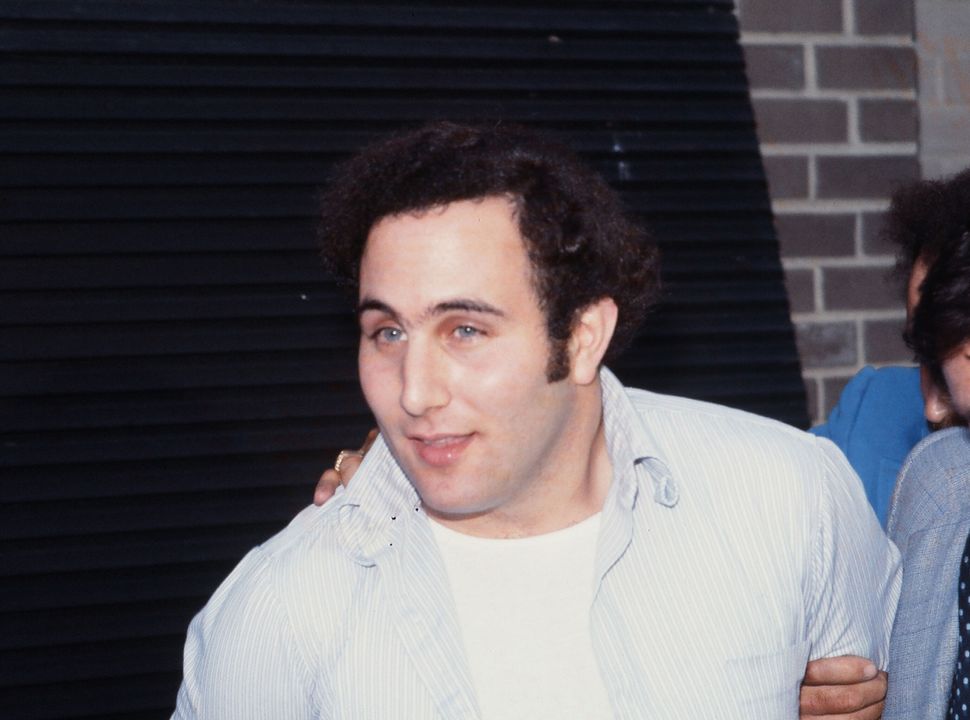 David Berkowitz, aka Son of Sam Image by Getty Images

“Jews are always sure of getting plenty of publicity,” wrote columnist David Schwartz of The Sentinel, a Chicago Jewish newspaper, days after Berkowitz’s arrest. “Did we need the David Berkowitz case?”

The tabloid splashed the word “CAUGHT!” in inch-high red letters across its front page the morning after cops nabbed Berkowitz outside his Yonkers, New York, apartment.

“Praise is due to the Police Department and to all who spared no effort in order to catch this horrible murderer,” editor Simon Weber wrote. “The Jewish population, however, received news of the arrest of the suspected murderer with feelings of shame due to the arrestee being a Jewish young man.”

It was a dark week in New York City. Under stark headlines, the mad imaginings of the young Jew spilled fast: “Sam told me what to do and I did it,” was the chilling quote on the front page of The New York Times on August 12.

It would have sounded silly if six people hadn’t died. And it would have been titillating if it hadn’t happened just next door — and if the villain hadn’t been named Berkowitz.

Days later, the Forward stumbled upon a promising detail: David Berkowitz was adopted, and his birth parents’ names sure didn’t look Jewish. The paper ran with the story on the front page. “‘Son of Sam’ Was Born to Non-Jewish Parents,” the headline read. “His Real Name Was Falco.”

It was great news. The devil-driven slayer wasn’t a Jew, but rather an Italian hiding behind a Jewish name. His birth parents’ names were Betty and Tony, the Forward reported.

Schwartz, in his Sentinel column, saw more than just exoneration in the report — he saw an indictment of hidden Jew-haters across the media, who knew exactly what they were doing when they called Berkowitz by his name.

“The press all over the world is full of stories about Berkowitz…. It is not said that he was Jewish, but the name Berkowitz is sufficient to convey and emphasize the point,” Schwartz wrote. “Anti-Semites have known that for their purposes all one requires is a name that sounds Jewish.”

There is no historical record of how hard Schwartz’s mind was blown when he learned that Betty Falco, née Broder, was Jewish, and that Berkowitz’s birth father was not Tony Falco, but a Jewish guy named Joseph Kleinman.There was no disowning David Berkowitz, something Jews had to live with until 1987, when Berkowitz became a born-again Christian in prison. Even now, serving out the rest of his life in jail, he still calls himself a Jew. “I’m one of the Jewish people that believes that Jesus is the Messiah,” he said recently on the evangelical TV program “The 700 Club.”