7 Jewish Things About ‘Game Of Thrones’ 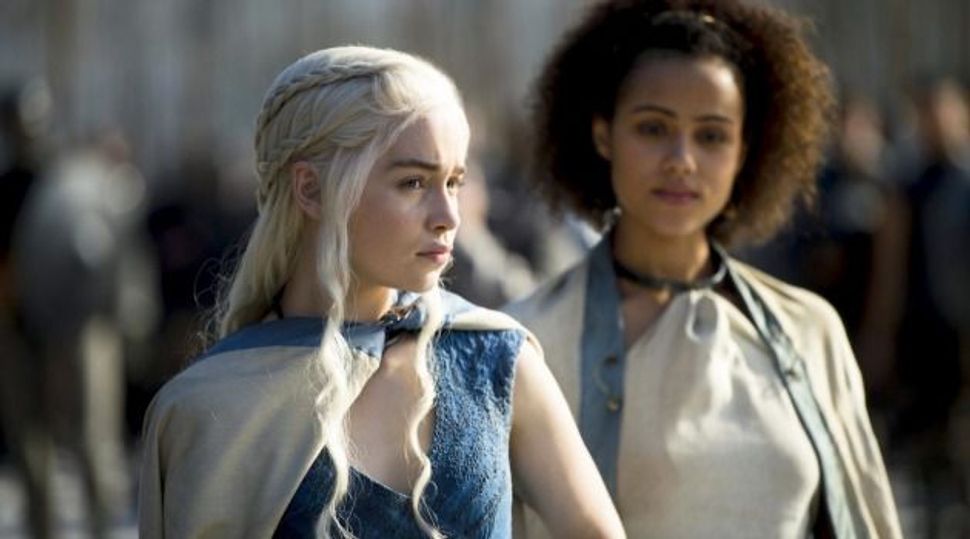 (JTA) — Summer is here — which means winter is coming.

And while the show, which is based upon the “A Song of Ice and Fire” series of fantasy novels by George R.R. Martin, is chockablock with religion and religious symbolism (see: the Faith of the Seven, the Sparrows, the Three-Eyed Raven, etc.), it doesn’t have any on-screen Jewish content of note.

However, fans may not realize that “Game of Thrones” has myriad Jewish connections off-screen, from the cultural identity of the show’s creators to an affinity with Anne Frank shared by two leading actresses.

As you sharpen your Valyrian steel swords and dust off your best bottle of Dornish wine in preparation, here are some Jewish facts about TV’s biggest show.

Both of the show’s creators are Jewish.

The writers David Benioff and D.B. Weiss met while studying literature at Trinity College Dublin in 1995 — and, according to Weiss, bonded over the fact that they were “two American Jews in Dublin” with “no Irish roots of any kind.”

Benioff, born David Friedman (in a prescient move, he uses his mother’s last name to differentiate himself from other David Friedmans, such as the current U.S. ambassador to Israel), is the son of Stephen Friedman, a former head of the New York Federal Reserve Board.

Weiss, who grew up in Chicago, worked for years as a personal assistant in Hollywood. By 2011, Benioff had tasted success through his novel “The 25th Hour,” and Weiss had worked on a few screenplays. In April of that year, their “Game of Thrones” adaptation premiered to critical acclaim, and their careers took off like fire from a dragon’s mouth.

George R.R. Martin was inspired by a French-Jewish author.

Martin has written that he is a huge fan of the French writer Maurice Druon’s epic historical novel series “The Accursed Kings” (“Les Rois Maudits”), which fictionalizes the Hundred Years’ War pitting the kingdoms of England and France against one another from 1337 to 1453.

“I think Druon is France’s best historical novelist since Alexandre Dumas,” Martin wrote in the Guardian in 2013. “Whether you’re a history buff or a fantasy fan, Druon’s epic will keep you turning pages: it is the original game of thrones.”

Druon, who died in 2009 just shy of his 91st birthday, was a member of the Academie Francaise and served as France’s culture minister for a year in the 1970s. He was the son of Russian-Jewish immigrants and fought in the resistance against the Nazis.

Two Israeli actors have appeared on the show.

With much fanfare in the Jewish press, Ania Bukstein and Yousef Sweid made brief appearances in the sixth season. Bukstein, who is also a singer and model, played Kinvara — a Red Priestess in service of the Lord of Light, who supports Daenerys Targaryen’s claim to the Iron Throne — in the fifth episode.

Sweid, an Arab-Israeli from Haifa who has appeared in “Homeland,” played Ash, a freed slave from the city-state Mereen.

Two “Game of Thrones” actors have starred in  SodaStream commercials.

Earlier this week, [Hodor (Kristian Nairn) ](Kristian Nairn “Hodor (Kristian Nairn) “)debuted in a very Hodor-ish role in an advertisement for the seltzer company. Nairn portrays an example of a Homoschlepien — a species that cannot drink water that does not come from a plastic bottle. (In the commercial, they are “discovered” by an anthropologist played by Jewish actress and neuroscientist Mayim Bialik.)

Nairn is the second burly “GoT” actor to film a spot for SodaStream, which had come under fire several years ago for having its factory in the West Bank (it closed in 2015). In the spring of 2016, the Icelandic actor and strongman Hafthór Björnsson, who stars as giant Gregor “The Mountain” Clegane, appeared in a YouTube video promoting “Heavy Bubbles,” a beverage packaged in dumbbell-shaped bottles.

In actuality, the spot was a promotional April Fool’s joke.

“I’m always open to new techniques for exercising, but you’ve got to admit that carrying bottles home from the supermarket is a hassle and actually pretty stupid,” Bjornsson said in a statement.

The series inspired a book for Jewish kids about Christmas.

While shopping for Hanukkah gifts in Belfast, actress Amanda Peet and Andrea Troyer were inspired to write “Dear Santa, Love, Rachel Rosenstein,” that aimed to take the sting out of the FOMO that so many Jews feel on Dec. 25.

Just what were Peet and Troyer doing in Belfast? They are married to Benioff and Weiss, respectively, and various spots in and around Northern Ireland’s capital serve as locations for the show, including Winterfell, the traditional home of House Stark. (The showrunners’ families have spent recent summers in Belfast while the show films, Peet told our friends at Kveller.)

“We started talking about what Christmas is like for Jewish kids … how left out they feel,” Peet said. “Originally, we wanted to write a book about how awesome Hanukkah is. That proved to be really difficult.”

The Red Woman narrated an audiobook of “Anne Frank: The Diary of a Young Girl.”

Carice van Houten, the Dutch actress who portrays Melisandre — also known as the Red Woman, a priestess of the Lord of Light who is fond of saying “the night is dark and full of terrors” — lent her voice to an audiobook version of Anne Frank’s legendary diary. Van Houten’s contribution was part of a smartphone app, launched in 2014, that also included interactive timelines, photos and video interviews with Miep Gies, who assisted the Frank family in hiding.

Van Houten was 14 the first time she read the book, she told the Dutch TV program “The World Spins On.”

“It really gripped me,” she said. “Gave me scary dreams that I still can remember.”

And Meera Reed starred in a BBC miniseries about Anne Frank’s story.

In 2010, the British actress Ellie Kendrick — tough-girl Meera on the show, who is bolstering Bran Stark in anticipation of a war against the White Walkers — gave a “note-perfect performance” as the teenage Anne Frank in an acclaimed five-episode BBC miniseries. The miniseries was trimmed to a two-hour movie that premiered on PBS on Holocaust Remembrance Day.

“I don’t think we tried to make Anne Frank into anything she wasn’t or adapt her into a new character,” Kendrick told the Los Angeles Times. “She was a very modern kind of girl and a very intelligent and vivacious character. She could be annoying, and that’s what makes her such a normal teenager. That she had fights with her mom and sister makes her much more poignant and effective; everyone has been through those experiences.”

7 Jewish Things About ‘Game Of Thrones’