When The Forward Was Held Up At Gunpoint 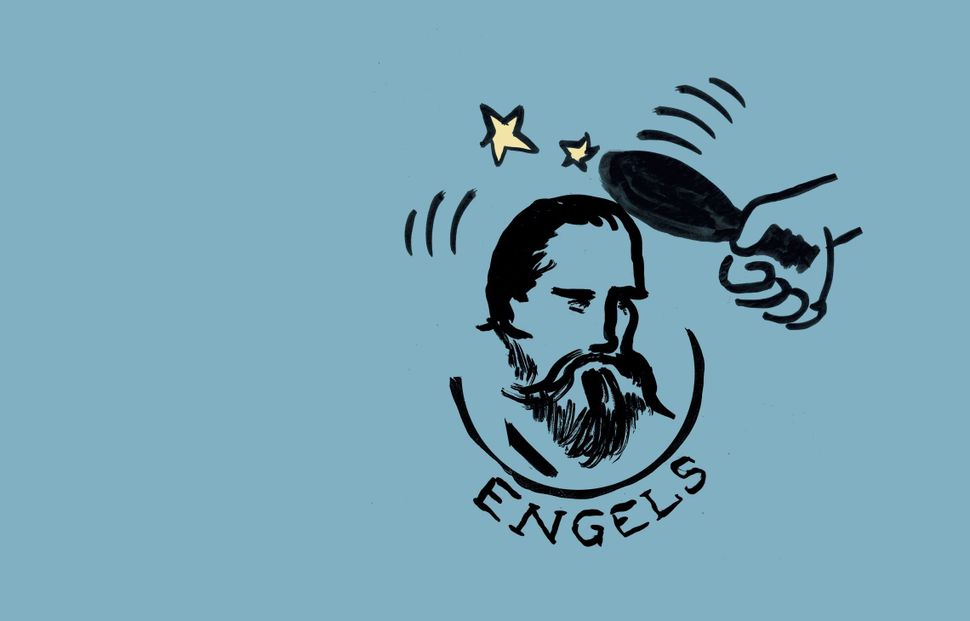 One Friday morning in 1924, an armored car pulled up in front of the old Forward building on East Broadway in Manhattan and disgorged three bank messengers, bearing $11,358 in cash among them.

The messengers passed under the gray busts of Marx and Engels, carved in relief high above the office’s arched entryway, and walked up the steps and through the big front doors.

The arrival of the three bank messengers Friday mornings was a regular part of the weekly routine at the Forward in those days. The cash, destined for the week’s payroll, went to the paper’s cashier, known in the Forward’s pages as Comrade Yefim Yeshurin.

What was not a part of the weekly routine was the arrival of the five young strangers who followed the bank messengers under the noses of the gray Communists that October morning.

Witnesses later attested that two of the strangers looked Italian and the other three looked Jewish. They blended into the bustle of the busy lobby, until two of them stepped up to Yeshurin’s window, where he was busy checking the bank’s count.

“Throw them up!” the men told him, pointing pistols in his direction. He obliged.

To the crowd in the lobby, the scene playing out in their midst seemed too theatrical to be real.

“It was a regular motion picture hold-up,” one of them said later.

The illusion was dispelled when one of the gunmen knocked an advertising executive named Meyer Keilson on the head with a blackjack.

The gunmen were separated from Yeshurin and his cash by the iron bars of the cashier’s cage. The door to the cage was in the main office, off to the side of the entry hall, where Comrade Mack Haskell, the building superintendent, sat with the keys.

Three of the gunmen stormed Haskell’s office and confronted him. “Open it!” one shouted, gesturing at the door.

“To the devil with you,” Haskell told him.

The gunmen knocked him on the head, too.

With Haskell dispatched, the men turned their attention, and pistols, back toward Yeshurin, who was watching through the bars. Yeshurin, opened the door, and the robbers flooded in.

As a reward for his cooperation, Yeshurin, too, got a knock on the head with a blackjack.

As the bandits swept the newspaper’s entire payroll into a black satchel, Haskell, recovering from his blow, ran across the lobby, shouting to the newspaper’s general manager, B. Charney Vladeck, to call the cops. Vladeck picked up the phone, only to discover the switchboard operator out of commission.

Within moments the strangers had fled to a waiting black Buick sedan that sped off down East Broadway.They had the entire $11,358 pay packet in their satchels.

Afterwards, an air of suspicion pervaded among the comrades at the old paper. The timing of the robbery had been too perfect. How had the bandits known when the payroll cash would be delivered? How did they know how to get into Yeshurin’s cage so quickly?

In its own pages, all the Forward said was that it was “clear the hold-up at the Forward was planned by the wanted bandits for a long time.” The New York Times, however, told a more sinister story. Executives of the paper, presumably Vladeck, told the Times that they suspected an inside job.

None of the Forward bandits was ever caught. If there was a co-conspirator among the Forward comrades, there’s no record that he was ever found out. If Marx and Engels knew, they never told.

When The Forward Was Held Up At Gunpoint