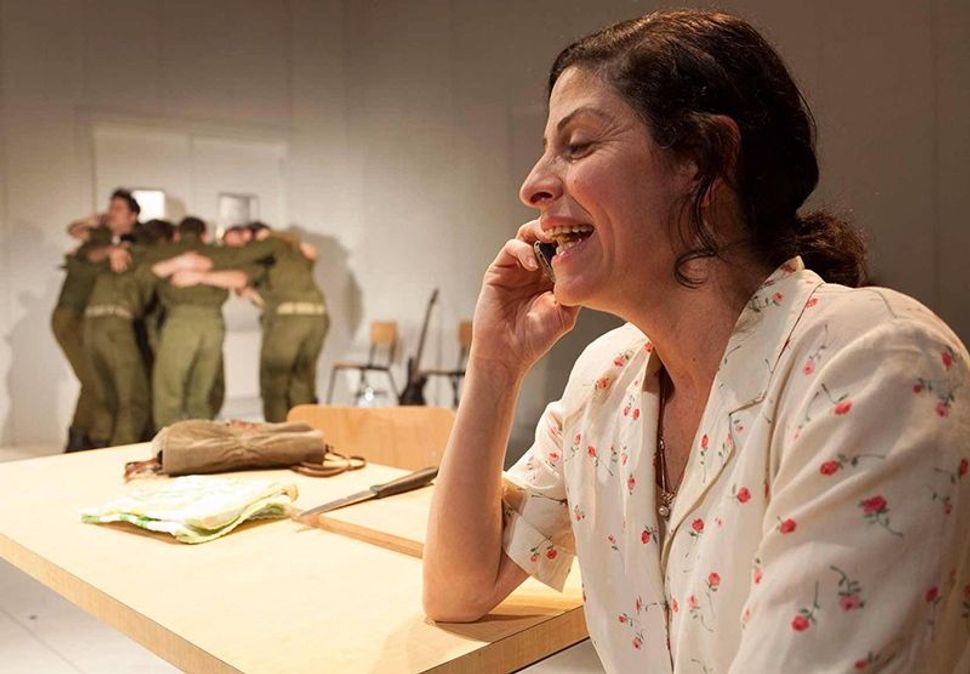 Image by Courtesy of Lincoln Center

I approached seeing the theatrical adaptation of David Grossman’s brilliant, disturbing novel “To the End of the Land” last night with some trepidation. A long list of notable but misguided literary types had pushed to cancel the production because it is partially supported by an arm of the Israeli government. They were unsuccessful but just in case, the sidewalk at the Manhattan theater was blocked off by uniformed police and security people carefully checked both bag and body.

My political worries were unnecessary. No protests. No angry exchanges. No disruption at all.

Instead, I was forced to confront the deep, haunting, indeed primal fear of a Jewish mother facing the loss of a beloved child. That fear propels the narrative of the book, of course, but somehow it seemed more piercing in the play, dominant and unrelenting. It is all the more remarkable because the play was written and directed by men (director Hanan Snir adapted the novel for the stage).

Ora, as portrayed by Efrat Ben Zur, holds the stage like she holds your heart, in a tight almost suffocating grasp that gets at every raw emotion a mother feels and expresses. She is at once loving, confounding, infuriating, pitiable, caring and self-absorbed, but she is not irrational. Oh no, she has every reason to believe that her beloved son Ofer will not return from a special and urgent military operation with the Israel Defense Forces he volunteered to do because that is a real possibility. So real that Ora escapes with her old lover Avram for a frantic hike through the Galilee so that she won’t be home when the grim-faced IDF messengers knock on the door with the worst of news.

Who among us hasn’t engaged in such magical thinking?

Who among us doesn’t hope that if we imagine something horrible happening to a child, the very act of imagination will function as a sort of inoculation, a secret guarantee that he or she will escape the evil decree?

I’m a Jewish mother; I joke that I come by my anxiety honestly. I know that good men (like my husband) worry, too, but not with the same uncontrollable dedication. Mothers — many mothers, at least — are wired differently, programmed to think of our children as the last mind bubble when we drift off to sleep and the first mental check-in when we awake.

Grossman takes this profound insight a step further. Ora doesn’t just imagine, she acts. She flees as if flight will cancel the decree.

The original title of the novel when it was first published in Hebrew was “Isha Borachat M’Besorah” — literally, a woman fleeing from news. But “news” doesn’t quite capture the entire meaning here. The word b’sorah can be translated as message or notification, implying an urgency or a prophesy.

The Hebrew title doesn’t have the ease of comprehension or the commercial appeal of “To the End of the Land” and I understand why it was changed in English. But seeing the play last night affirmed my sense that the story is Ora’s story. She is the isha, the woman — not simply a wife or a mother, but a woman, every woman.

This is why the attempted boycott of Grossman’s play was so misguided. Not only is he a fierce anti-war activist in the Israeli political context, but his characters speak to a human condition that extends beyond the specific conflict in the Middle East to all mothers whose children face existential danger.

Or should I say, all parents. Grossman himself lost a soldier son in the last days of the Lebanese War. Even if he had tried to flee, he could not have escaped the b’sorah. Neither, in the end, can any of us.