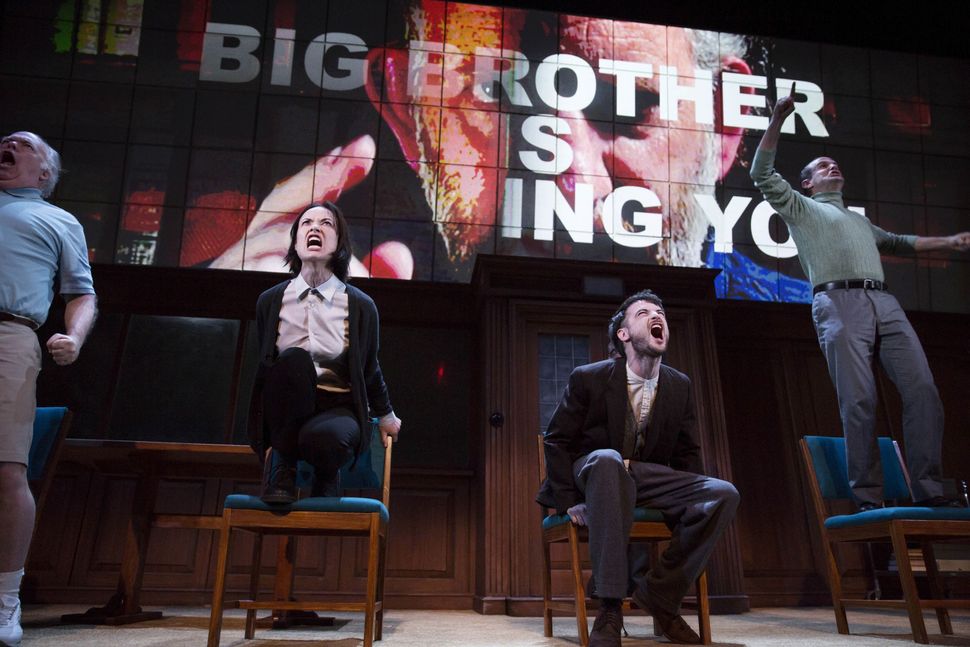 The telescreens mounted above the doorways from the Hudson Theatre’s lobby to its auditorium — you might call them Samsung plasmas, but you’d be missing the point — display some familiar slogans: “War Is Peace”; “Ignorance Is Strength”; “Love Is Fear.” “This Bill That Cuts Billions From Medicaid Does Not Cut Medicaid” is not among them, but it could be. This is the new opened staging of George Orwell’s “1984,” and doublethink is the lingua franca here.

“1984,” adapted by Robert Icke and Duncan Macmillan from the 1949 novel, was a hit in London a few years ago, and, not long after inauguration day in 2017, powerhouse producers Sonia Friedman and Scott Rudin announced that they would bring it to Broadway. But it is far from the only Trump-tinged play that has been presented in today’s resistant New York.

“Building the Wall,” by Robert Schenkkan, whose LBJ bio-play “All the Way” won the Tony for best play three years ago, is set in a not-too-distant future, where Trumpian plans have gone awry. It had a truncated run off-Broadway this past spring. The now-famous Oskar Eustis staging of “Julius Caesar” in Central Park outfitted Shakespeare’s (and history’s) assassinated emperor in a dark suit and a too-long red necktie. And “Come From Away,” a thoroughly mediocre musical about Canadian compassion on 9/11, has become a hit simply because a message of basic decency is so welcome and even necessary right now.

“Building the Wall” was the most direct response to Trump. It imagines our country just a few years in the future, after a never-quite-specified terrorist incident has prompted the administration to enact draconian deportation policies toward immigrants. It transpires as a jailhouse interview between an African-American academic and a man who has been imprisoned for a horrific crime. Slowly we learn that the man worked for a private prison company responsible for warehousing in-transit deportees, and that as more poured in and few went out, and he received no guidance or resources from his supervisors, he instead, for lack of other options, committed an atrocity.

Written, the playwright has said, in a weeklong “white-hot fury,” it had a successful run in Los Angeles but closed early in New York. It’s designed to be a plausibly dystopian view of our future, a vision of horrible things that we’d think could never happen but in this new world just might. It’s a bit schematic, its horrors less inevitable than they should be, and it — like any political play in New York — is preaching to its choir, but it’s also a thoughtful look at just how bad things might get.

I didn’t see the controversial “Julius Caesar” (though I did help organize a rally in support of the Public Theater), but in some ways what happened there was the truly Orwellian theatrical event of the summer. Countless productions of Shakespeare update the Bard’s work for the current time, in one way or another. (“King Lear” seems like the most apt work for this moment, although there’s no chance of Ivanka not inheriting the entire country.) Several years ago, the Guthrie Theater, in Minneapolis, cast a black actor as a Barack Obama-like Caesar, without any controversy. Here, though, after the Central Park production, with its Trumpy Caesar, had run for several weeks without comment, a sensationalized “Fox & Friends” segment prompted an angry tweet from Donald Trump Jr. This led Trumpist Twitter to gang up on Public sponsors, who promptly withdrew or reallocated funding. The National Endowment for the Arts put out a statement emphasizing that it does not fund Shakespeare in the Park. In our newspeak world, what was actually happening, the actual message of the production — that violence to defend democracy will not work — was immaterial. Rather, state TV and Big Brother’s son manipulated the masses into cowing major companies. It was double-plus un-good. 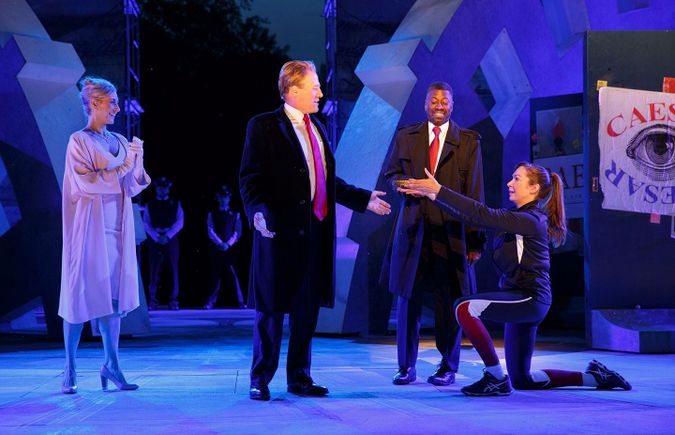 “Julius Caesar” at the Public Theater. Image by Joan Marcus

Now there is this new “1984” that squeezes more anxiety and discomfort into 100 theatrical minutes than one previously thought possible (at least since they renovated those torture-chamber seats at the BAM Harvey Theater). It tells the familiar story of Winston Smith, everyman, who is determined to retain his humanity by keeping a diary, and by finding secret love, amid the totalitarian compelled groupthink of Big Brother’s regime. But it cuts back and forth in time, from the height of Big Brother’s power in 1984 to a mid-21st-century point when people are studying the history of that time; it repeats some scenes; there’s constant droning noise and music, keeping the audience off-balance and uneasy. You never know what’s real, what’s not, whom to trust, what to believe.

That, of course, is the point of Orwell’s book. When language and thought are controlled and manipulated, it becomes impossible to know the truth. And that’s what’s so scary about watching this production at a time when our president and his advisers lie routinely and repeatedly, when they construct an alternative reality just as surely as Winston spends his days editing old documents to make history conform with what Big Brother tells you is true.

In fact, that’s the scariest part of this play — scarier than the much-ballyhooed torture scenes at its end, as Winston is destroyed. (All the hype around the show’s purported gruesomeness is both not quite true — strategic blackouts keep us from seeing any actual abuse, only its effects — and quite possibly counterproductive, as the show has been selling poorly.) In a play that leaves you deeply unsettled, it’s the reminder of government’s power to manipulate truth that is most harrowing.

But there’s also a glimmer of hope for us in “1984.” Winston thinks he’s joined “the resistance” — led, natch, by one Emmanuel Goldstein — but in fact the regime has been watching him all along, and the resistance, and Goldstein, may or may not even exist. Here, across the United States and especially in New York, the resistance is real.