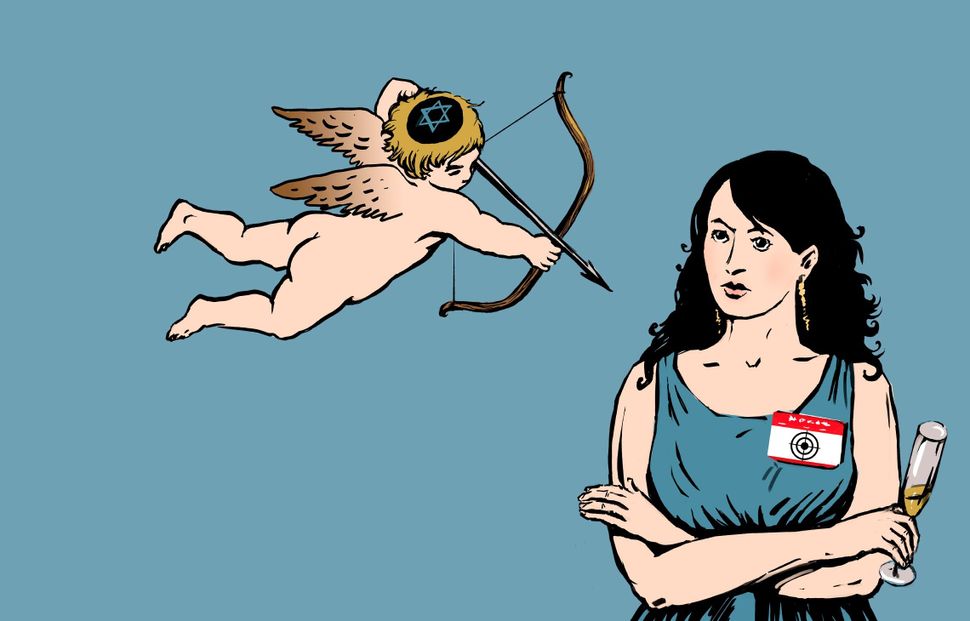 Almost every week a Facebook event pops up on my timeline inviting me to mingle at a “20s and 30s” night with other young Jews. Sometimes I wonder if my mom is controlling my feed.

I’ve attended at least a dozen of these functions over the past two years, usually with the prospect of meeting someone, but also to feel part of a Jewish community and perhaps find an affiliated synagogue to join. I’m still looking. Almost all have proven unsuccessful, and some disastrous. Here’s what I’ve been up to lately:

1) Shabbat Dinner: My first experience with these “singles nights” — what they should really be called — takes place near Bed Bath & Beyond and is hosted by Young Jewish Professionals. I arrive wearing a vintage swing dress dotted with red sequin lips. I look like Cha Cha at the prom in “Grease.” Everyone else looks like they came from work in Midtown. As I sidle up next to the bar where the cocktail hour has already begun, several people stare. Two men slip me their business cards. Later in the middle of dinner, I try to sneak out early, but one of them catches me. “Where are you going?” he asks.

2) Sunset Soiree: At the Museum of Jewish Heritage, there’s a sushi spread at one end of the room and plates of mozzarella sticks at the other. I spend most of the night hovering near the food. I bring a heap of bites back to one of the standing tables and end up next to a cute man who looks like a young Paul McCartney. He tells me his co-worker had dragged him there, and then asks why I am “at this thing.” I mumble something awkward and false about having to conduct research for a story. It gets me a date though. A week later he takes me to drinks, then later to dinner. I like him. At the end of the night comes the kiss. Or attempted kiss. Or tongue-stabbing. I’m not sure what it’s supposed to be, but suffice it to say that this is the last time I see him.

3, 4, 5) Fast-forwarding: I attend a frat party at a sports bar advertised as a Jewish lawyer night, a Shabbat that lures attendees with free cookies and a weird folk band, and a party in a Chelsea loft where one man follows me around like a puppy for two hours. I avoid future events, until:

6) East Village Synagogue: I find a “20s and 30s” night at Town and Village Synagogue on 14th Street. I have learned that proximity to my apartment is important both for dating purposes and synagogue convenience. Ten minutes before I had planned to leave, I am still in my apartment. I change outfits several times and end up wearing the first ensemble I tried: a sheer black collared shirt with a wool band around the middle, dark-wash jeans and my beloved 1950s lavender heels that strap across the ankle. I speed-walk to the building and a woman in the foyer with a clipboard checks me off the list. She hands me a nametag, which makes me feel like I’m back at camp. I don’t want the sticker to snag my blouse, so I paste it onto my upper thigh.

A group of about thirty people are socializing around a foldout table under the fluorescent lights. It looks like most other synagogue events I’ve been to, albeit on the small side. I walk around the table to stop by the bar, a.k.a the usual stash of kosher wine bottles. Most are empty, but I drain the last glass of rosé into a plastic cup. I am debating whether or not to grab a macaroon when a man approaches.

“Hi!” he says, scanning my chest in search of a nametag. He holds out his hand. I point towards my leg, regrettably near my groin, and say, “Hi, I’m Britta.”

“Are you trying to tell me something?” he asks, smiling.

I cringe. He tells me a corny Jewish joke, which makes me laugh anyway. (“Why aren’t there ever any Jews on football teams?” “I don’t know. Why?” “Because they want their quarter back.”)

I spend most of the night listening to him talk about his yoga practice and job. When the time feels appropriate, I excuse myself and leave. He leaves me a voicemail the next morning asking me to coffee, but I never return the call.

A week later, I am about to cross Town and Village Synagogue off my list and check out other venues when Facebook suggests a “Shabbat and Sushi” there. Two things I love: Friday night and Japanese food. Ah, how did Facebook know? Perhaps my mom was behind it. Either way, I don’t need much convincing. I click “Attending.”

Britta Lokting, a former Forward culture fellow, has written for the Village Voice and Narratively.