Can You Sing A Novel To The Tune Of ‘Fiddler On The Roof’? 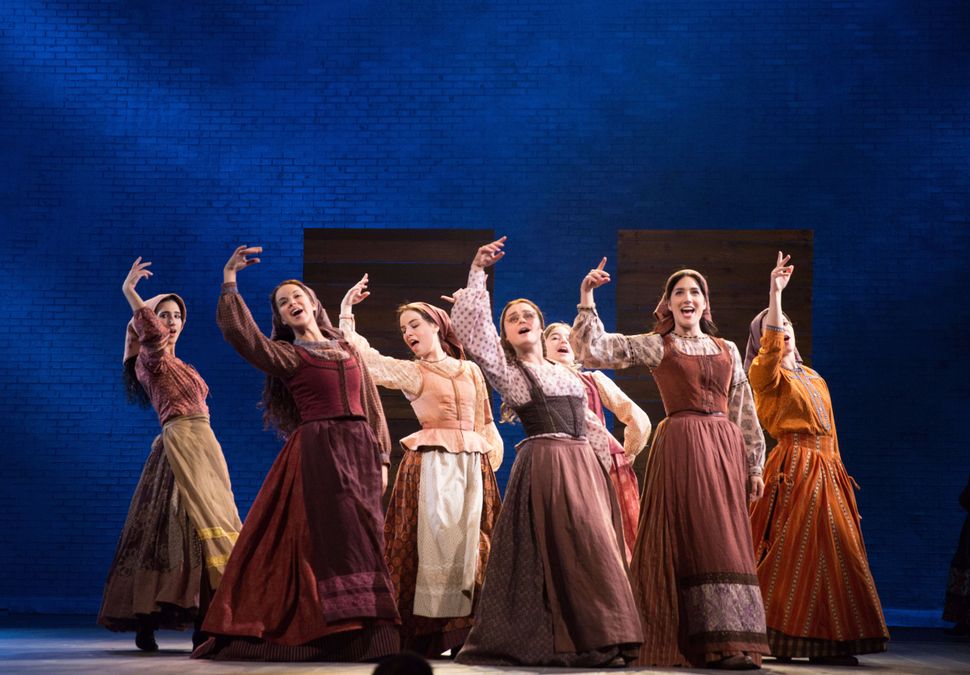 Fiddler on the Roof Image by Joan Marcus

After Anatevka: A Novel Inspired by “Fiddler on the Roof”

“Fiddler on the Roof” ends with the dairyman Tevye and most of his family evicted from their shtetl of Anatevka and heading to new lives in America. In their musical adaptation of Sholem Aleichem’s Yiddish-language tales, Joseph Stein, Sheldon Harnick and Jerry Bock provided a backstory for the great migration of Eastern European Jews to the United States around the turn of the 20th century. Even as its depiction of Cossack-led pogroms gestures at the Holocaust to come, “Fiddler” is fundamentally an account of adaptation and survival, relevant not just to Jews, but also to generations of American immigrants.

In her floridly romantic historical fiction, “After Anatevka,” Alexandra Silber veers off in another direction entirely. Rather than follow Tevye and his clan to the United States, as one might have expected, Silber — an actress by trade — imagines what might have befallen Tevye’s second daughter, Hodel, and her revolutionary husband, Perchik, in the wilds of Siberia.

Silber has said that her portrayals of both Hodel, in a West End revival of “Fiddler,” and Hodel’s elder sister, Tzeitel, in the subsequent Broadway production, influenced her writing of the book. “After Anatevka” boasts a foreword by “Fiddler” lyricist Harnick, who calls it “a powerful and gripping tale of love, loyalty, bravery and endurance,” and there are laudatory blurbs by theatrical colleagues, such as the playwright Terrence McNally, the actor Jason Alexander and Silber’s “Fiddler” co-star Danny Burstein. This past spring, in New York, its impending publication inspired a concert of original songs by Project Broadway at Symphony Space.

For all that, the novel simply isn’t very good. It’s at once an overwrought, cliché-ridden romance (“It was this surge of feeling that moved him to kiss her face with a covetous thirst, as if drinking in her very essence”) and a grimly unpleasant prison story, featuring rape, incest, torture and violent death. Little of the humanity and humor of the stage musical, or of the original stories, survives Silber’s novelistic assault.

For all the crudeness of her prose, Silber does manage her narrative’s ambitious temporal shifts with some skill. The novel seeks to illuminate Hodel and Perchik and their presumably epic love by delving into their imagined past. In Perchik’s case, we get a plot out of Charles Dickens: a brilliant orphan, “a soul teeming with greatness,” born out of wedlock, nurtured by a rabbi mentor and raised by a cold, mercenary uncle whose love he craves and whose fortune will play a role in the novel’s denouement.

In delineating Hodel’s pre-Perchik existence, Silber returns us, with some success, to the situations and characters we know and love from the stage musical. From the preparation of the challah for the Sabbath to the dawn milking of cows, she evokes the warmth and tradition of Tevye’s household — now seen not from Tevye’s perspective (he is almost absent) but from Hodel’s and, eventually, Perchik’s.

The ménage that Tevye nominally rules turns out to be a woman’s world, a training ground for Jewish domesticity. Golde, Tevye’s wife, is the general. But Silber’s Tzeitel, following in her footsteps, is the ultimate homemaker, who “attacked the laundry with visible signs of pleasure” and felt a “deep degree of contentment… after a day of baking, mopping floors, washing, ironing, and giving baths to the little ones.”

Silber imagines a tense, rivalrous relationship between Tzeitel and the less traditional Hodel, which begins to thaw when Tzeitel faces the heartbreaking loss of her childhood love, the tailor Motel Kamzoil, to an arranged marriage with a wealthy butcher. That particular crisis, as we know, is averted. Later, after she and Motel have moved to Warsaw, Poland, Tzeitel sends the distant Hodel moving letters expressing a long-repressed sisterly love. It is in the interaction between the two sisters that Silber’s stage experience comes closest to paying off.

The rest of the novel is mostly a dark gulag story, filled with threats, betrayals and an array of male characters — prisoners and their jailers — whom the reader may struggle to differentiate. When Hodel tries to follow Perchik to Siberia, she is thrown into prison, where she dreams of home. Then, after considerable suffering, she is allowed to join and marry Perchik in the labor camp of Nerchinsk, in Siberia.

There, the intellectual Perchik, imprisoned alongside various violent and petty criminals, works in a salt mine and talks of revolution. His closest friend, Dmitri Petrov, is a cellist who somehow manages to retain and play his beloved instrument while quarreling continually with his exasperatingly simple bunkmate, Yevgeny, and pining for Hodel. Presiding over the camp is a man known, with increasing irony, as The Gentleman; his seeming acts of kindness are preludes to treachery. He is, in turn, ruled by someone known only as The Voice, whose identity remains a secret till almost the end.

Set against the tribulations of the prison camp is the supposedly indestructible love of Hodel and Perchik. “He was Jerusalem,” Silber writes, “and she a holy pilgrim.” When they first make love, Silber writes, with characteristic effusion: “He leaned farther into her, his arms wrapped around the entirety of her frame, enveloping her as if to fuse with her being for eternity — as indeed they both wished to do in this moment and evermore…. It was a triumph of such intense ecstasy that no entwining promise, no ardent avowal, no other utterance of devotion would ever be necessary.” Neither is it necessary to read further — unless romance fiction is your particular guilty vice.

Can You Sing A Novel To The Tune Of ‘Fiddler On The Roof’?