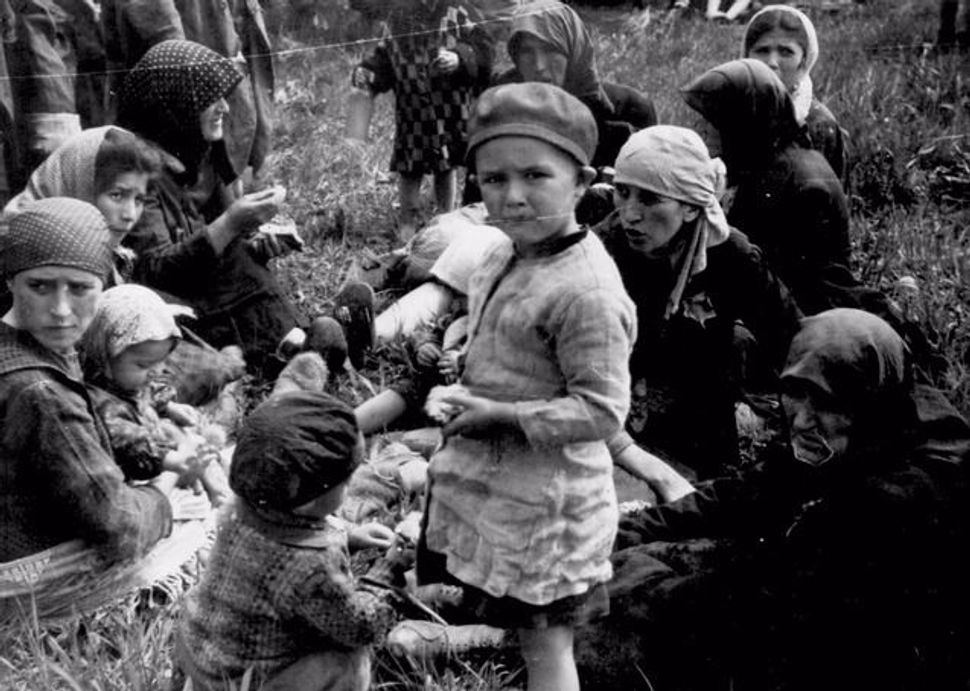 Birkenau, Poland, May 1944. Jews deemed unfit for work waiting in a grove near gas chamber. Image by Yad Vashem, via Wikimedia Commons

Tisha b’Av, the Ninth of Av, is the commemoration of the destruction of Jerusalem’s Temple.

And it’s also, basically, Catastrophe Day for the Jews. It’s the day we consolidate all of our thousands of years of sorrow into one, 25-hour long inferno.

Here’s what traditional Jews are mourning on this day, according to the Mishnah (the first redaction of the oral tradition, written around the first century CE):

1313 BCE: While the Israelites were sojourning in the desert, Moses’ spies return with bad reports about the Land of Israel (see Numbers 13-14).

423 BCE: First Temple, built by King Solomon, is destroyed by the legions of Babylonian king Nebuchadnezzar.

69 CE: Second Temple, built by Ezra and Nehemiah, is destroyed by the legions of Roman emperor Titus.

135 CE: Turnus Rufus plows the site of the Temple in Jerusalem and the surrounding area.

Other events that notably took place on this day:

1290: Jews are expelled from England by King Edward I.

1492: King Ferdinand and Queen Isabella sign the edict of the Spanish expulsion.

The religious laws associated with the day:

The rules are pretty much the same as those for one in mourning/shiva.

Here’s a fascinating piece on Psalm 137, which includes the famous verse ‘By the rivers of Babylon we sat and wept’, and which has “long served as an uplifting historical analogy for a variety of oppressed and subjugated groups”. Worth the read.

25 hours is long — but don’t worry, we’ve got a list of best movies to watch to help the day move along.

TIPS FOR BEFORE THE FAST

CUSTOMS FOR THE PRE-FAST MEAL