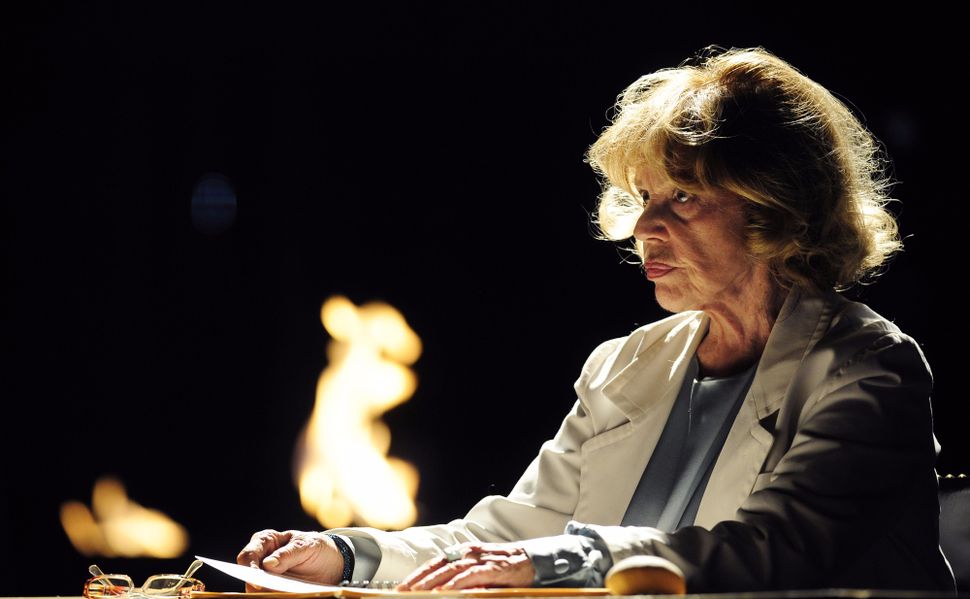 Moreau’s empathy with Jewish friends and colleagues may have also provided inspiration during a long and much-honored career. I remember visiting her about 25 years ago for an interview at her apartment on Le square du Roule, a private road in the ritzy eighth arrondissement of Paris. The French press at the time had reported a financial crisis requiring her to sell a country home, but her light, airy, dwelling luxuriantly filled with cut flowers did not suggest poverty. In her sixties, diminutive but no longer slender, Moreau was still very much a seductress, with a hoarse voice and soft, appealing eyes expressing vulnerability, warmth, and awareness of tragedy. Although the interview was conducted in French, she would occasionally interject a phrase in English such as: “You know, my mother was a Tiller Girl!” Her mother Katherine Buckley, from Oldham in Lancashire, had moved to France as a member of a popular international dance troupe. Outdoing the later Rockettes with high-kicking verve, the Tillers earned praise from the German Jewish cultural critic Siegfried Kracauer, who reported in 1923:

“These 76 energetic women dance about in geometric shapes: the regularity of their patterns is cheered by the masses, themselves arranged by the stands in tier upon ordered tier.”

More than just showbiz antecedents, Moreau’s mother made her daughter understand prejudice in wartime France. In Paris, as an enemy alien, her mother was required to register daily with the Gestapo. The family lived above a bordello and to get home, young Jeanne would rush by lines of Nazi soldiers waiting their turn. Much later, when Moreau starred in the Israeli filmmaker Amos Gitai’s “One Day You’ll Understand” (“Plus Tard, Tu Comprendras,” 2008) as a Jewish mother whose parents were murdered in Nazi concentration camps, but kept this information from her own children, she mentioned during press conferences:

“At middle school, some of my little classmates wore yellow stars and they would vanish from one day to the next. That was our daily experience.” Her solidarity extended to the point that, as she told “le Nouvel Observateur” in 2011, she and her pals asked a friend’s mother, a seamstress, to make yellow stars which the girls sewed onto their blouses. Her furious father, summoned to the school, gave her an “enormous slap,” inspiring this question from Jeanne: “Are we Jews or do you hate the Jews?” Small wonder that in a mock interview with herself for a 1991 French TV program, when asked whether she would be more embarrassed if a visitor to her home discovered by her bedside a sex toy or a copy of Hitler’s “Mein Kampf,” her reply was the latter.

Stage acting became her escape, at the Comédie Francaise and Théatre National Populaire, where she worked with notables, including the multi-talented French Jewish actor Robert Hirsch. The English Jewish director Peter Brook cast her in the French production of Tennessee Williams’s “Cat on a Hot Tin Roof.” Among other early roles were in a play by Paul Claudel, “Tobias and Sara,” (Tobie et Sara, 1942) inspired by the Book of Tobit. Claudel’s play opined on the role of the Jews in history, as well as setting the scene of Heavenly Jerusalem. Another Biblical drama, Jean Racine’s “Athalie,” about the widow of the king of Judah, provided another memorable theatrical role for Moreau.

Onscreen, her hoarse, if seductive, singing charmed listeners, and she released recordings of songs by Serge Rezvani, a painter and writer of Russian Jewish origin, who composed under the name Cyrus Bassiak. Among those enchanted by her singing was American Jewish screenwriter and director Paul Mazursky, who included a cameo role for her, singing in his “Alex in Wonderland” (1970).

After decades in film, in later life she returned to the stage, in 2009 opening the Avignon Festival in France with “The War of the Sons of Light Against the Sons of Darkness,” a production inspired by Josephus’s “War of the Jews,” conceived and staged by Gitai. The play was narrated by Moreau, amidst a large cast including Jerry Koenig, the late advertising director of “The Forward,” as the Roman emperor Vespasian. Gitai’s 2009 film “Carmel” featured Moreau reading letters written by Efratia Gitai, the filmmaker’s late mother, about life in early Israel, and in Paris, Moreau read more of these letters onstage. In the intervening years, she had not forgotten her youthful compassion for the situation of Jews in Fascist Europe, acting in Joseph Losey’s drama of Occupied Paris, “Mr. Klein” (1976).

Moreau also narrated documentaries, including Marcel Ophuls’s “Hotel Terminus” (1988), about the Nazi war criminal Klaus Barbie, and “The Architecture of Doom” (1989), by Swedish director Peter Cohen, about Hitler’s esthetic ambitions. Apart from these somber tasks, she found time for a torrid romantic life of such variety that her paramours ranged from Pierre Cardin to the American director William Friedkin, producer Raoul Lévy and Georges Moustaki, a singer and songwriter of Greek Jewish origin. I was reminded of these steamy antecedents as my interview drew to a close and Moreau, who had been charming, captivating, and indeed seductive throughout, handed me a flower and told me, “Now that you know where I am, don’t be a stranger.” I took this to be a polite gesture from someone who, surrounding herself with artistic greats throughout her life, had retained admirable moral fibre and a sense of humanity rare in the performance world.