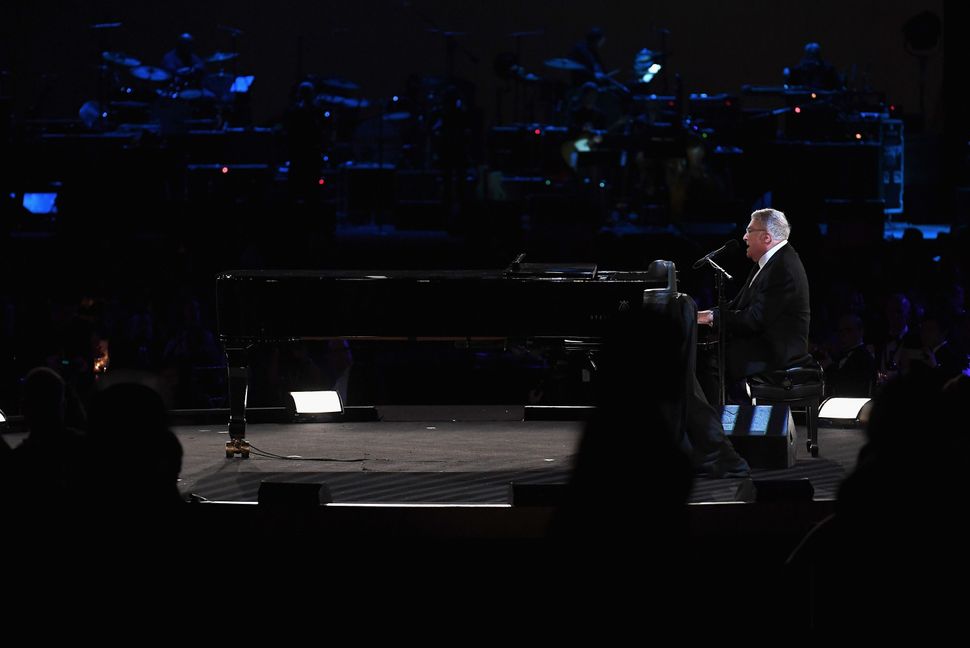 Legend has it that at age nine, Randy Newman asked his father, “Hey dad, what’s a Jew?” A friend had invited Newman to a party; the friend’s father called to explain that he had to disinvite Randy because the event was being held at a restricted country club. At that point in his life, Newman was a very assimilated Southerner, with little to no awareness of his ethnic or religious background. In short order, however, curious young Randy delved into the topic, seeking the answer to his own question. And in some sense, he has been mulling over that question in song ever since.

Randy Newman’s entire oeuvre can be read as that of a stranger in a strange land trying to make sense of it all. With an outsider’s point of view, Newman is especially attuned to the innate hypocrisy and absurdity of much that passes for American values. He once told an interviewer, “I’m very interested in this country. Though I don’t necessarily feel a part of it.”

Newman’s subtle wit and his jaunty melodies have often disguised their creator’s struggle with The Creator. To mark the release of Newman’s first album of new songs in nine years, “Dark Matter,” we go fishing for Randy Newman’s most Jewish songs … so far.

God Himself is one of Newman’s favorite characters – he even cast James Taylor in the role in his rock opera version of “Faust.” But in this 1972 song, Newman portrays God as a bemused, indifferent divinity:

For if the children of Israel were to multiply

Why must any of the children die?

So he asked the Lord

And the Lord said:

Cause he thinks that’s where I’ll be

You all must be crazy to put your faith in me

You really need me

Even earlier, on his 1968 eponymous debut album, Newman pondered God’s plans and whereabouts, along the way invoking the “fiery furnace” image from the Book of Daniel:

When the Big Boy brings his fiery furnace

Or will He strike the fire and burn us?

And He’s so straight

And you know He’s watching.

In the final verse, the song’s narrator directly implores the Lord to act before defending his inaction with the very Kabbalistic notion that G-d has withdrawn from history:

Come and save us

Come and look at what we’ve done

With what you gave us

That our Big Boy’s dead

But I think He’s hiding

Maybe it’s just me, but I’ve also always felt that Newman’s reference to G-d as “Big Boy” is an allusion to “Little Boy” and “Fat Man,” the pet names given to the atomic bombs dropped on Japan in August 1945. Such an allusion would certainly give double-meaning to the lyric, “Will He strike the fire and burn us?”

One of Newman’s most subtle digs at G-d, the singer contrasts the divinity above with the reality of tears and dying on Earth.

Newman tends to eschew autobiography in his songs, favoring the essayist’s quip or the unreliable narrator to do his heavy lifting. But “Dixie Flyer” is a virtual memoir of his youth. The “Dixie” of the title serves triple-duty – it refers of course to the South on one level, and more specifically to a popular cross-country passenger train named “Dixie Flyer.” But “Dixie” was also Newman’s mother’s nickname – she was raised in New Orleans from age two, and it’s the name she was known by throughout her life.

Newman lays out the narrative plainly and truthfully: Having been left behind in Los Angeles with her two young sons by a husband who went off to Europe to aid the war effort (he was a military doctor), hardly knowing a soul, Dixie Newman packed up her things and brought her boys on board the Dixie Flyer to return home to her family and friends. Upon arriving in New Orleans, Newman paints this picture of the Fox family that greeted them:

Her brothers and her sisters came down from Jackson, Mississippi

In a great green Hudson driven by a Gentile they knew

Drinkin’ rye whiskey from a flask in the back seat

Christ, they wanted to be Gentiles, too

Who wouldn’t down there, wouldn’t you

Turned into something of a countercultural pop hit by the vocal group Three Dog Night, Newman’s original is of course darker, painting a picture of a (not-so) squalid party where people are drinking and smoking (gasp!). The narrator is downright shocked by what he’s witnessing:

I seen so many things

I ain’t never seen before

I don’t know what it is

But I don’t wanna see no more

Mama told me not to come

That ain’t the way to have fun, son…

Is there really any doubt that the “Mama” of the song is a Jewish mother?

This song could well be Newman’s satirical masterpiece. No one is spared in this indictment of racism – not the redneck narrator nor the northern liberals who look down upon Southerners as backwards bigots while they consign urban African-Americans to inner-city ghettoes. The song’s opening lines sets the scene on a shocking note:

Last night I saw Lester Maddox on a TV show

With some smartass New York Jew

And the Jew laughed at Lester Maddox

And the audience laughed at Lester Maddox too…

Newman caught a wave of backlash after this satirical novelty became his biggest hit – it went all the way to number two, kept out of the top spot by the Bee Gees’ “Stayin’ Alive.” While the song may have no overt Jewish content, it is a deft skewering of stereotyping, prejudice, and bigotry. Unfortunately, many mistook the voice of Newman’s unreliable narrator to be that of his own – a Maryland politician reportedly introduced legislation to ban the song from the airwaves. In a contemporaneous interview, Newman diminished his detractors as “just a tiny minority.”