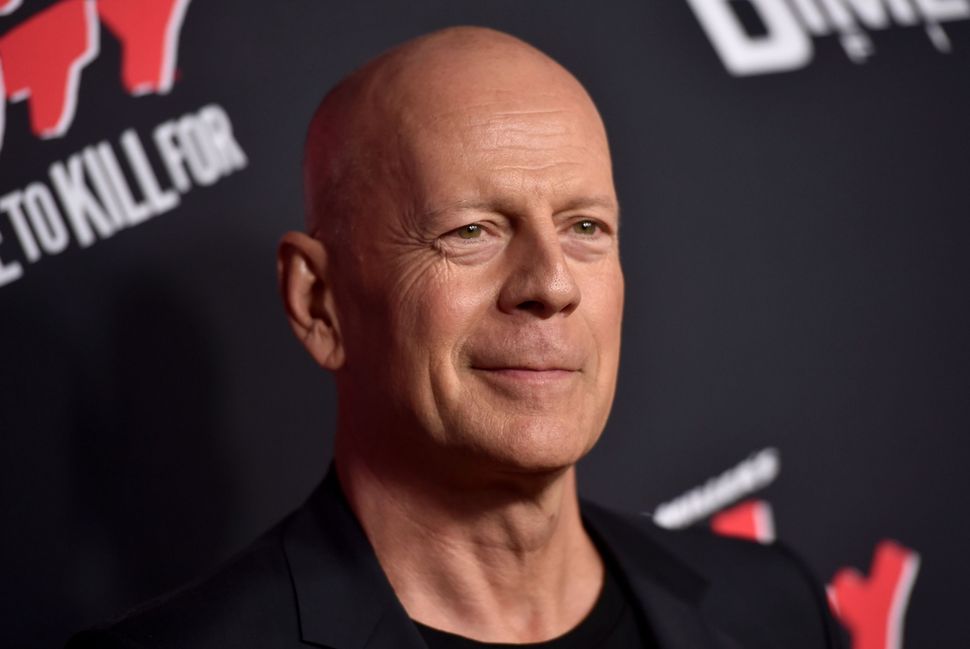 “He looked like a white dude,” an earnest cop tells her superior in the new trailer for Eli Roth’s remake of the film “Death Wish.” She’s describing Paul Kersey (Bruce Willis,) a heavily armed vigilante engaged in a one-man war on crime. But she could also be talking about director Eli Roth himself — a Jewish director who, in the “Death Wish” trailer, is peddling an openly fascist white empowerment fantasy. Jews as Jews, obviously, aren’t empowered by fascism. But Roth’s trailer shows how white Jews have the option of identifying with whiteness — with all its queasy benefits.

The original “Death Wish,” presented in 1974, starred Charles Bronson and was a naked plea for vigilante violence. Bronson plays an affluent architect who is away from his Manhattan home when criminals murder his wife and rape his daughter. In revenge, he gets a lot of guns and sets about murdering and torturing criminal riffraff. The film showed an America overrun by coddled criminals, portraying them as subhuman vermin who needed to be exterminated. This kind of police state propaganda helped provide the ideological justification for America’s mass incarceration binge, which has given us the largest prison population in the world, both by absolute numbers and by percentage.

Forty-three years later, law and order porn remains popular; President Trump has boasted that he won New Hampshire because the state is a “drug-infested den.” (Note: Trump lost New Hampshire.) Roth’s trailer cleverly and grossly updates the vigilante message by setting the film in Chicago. As Roth is aware, Chicago’s very real violence problem has been exaggerated and politicized by right-wing media and by the president himself, both of whom love to use “Chicago” as a dog whistle for “Black people are out-of-control criminals.” The trailer presents Willis, dressed in a hoodie, as a hero to Chicago’s black population, which is, supposedly, absurdly grateful to a white man for coming into their community and blasting away at black drug dealers in the middle of the street. Some of the worst tragedies in Chicago have been caused by stray bullets hitting innocent bystanders, but mentioning that would obviously interfere with the fetishistic charge provided by repetitive close-ups of guns firing and being loaded.

Willis himself is a canny choice for a film celebrating violent white masculinity. The actor’s most iconic film is probably “Die Hard” (1988), in which he plays John McClane, a working-class cop semi-estranged from his executive wife, who works for a Japanese corporation. McClane, in short, is emasculated by the progress of creeping globalization and feminism. The film is a backlash fantasy, as McClane gets to save his wife from a team of mostly foreign terrorists, thereby reasserting the central awesomeness of white male American virility.

Jewish men themselves are often stereotyped as feminized foreigners. Terrorist leader Hans Gruber (Alan Rickman) low-key plays off Jewish stereotypes — foreign, sophisticated, effeminate, oily, pretending to hold an ideology, but in fact only obsessed with money. In the world of “Die Hard,” people like Eli Roth, and people like me, are not necessarily among the empowered. We’re the scheming scum, tossed off the skyscraper, the filth cleansed by whiteness triumphant.

Obviously, no one wants to be the disgusting villain who dies. You’d rather be the hero if you can swing it. Eli Roth is quite aware of this — which accounts no doubt for his joyful performance in “Inglorious Basterds” (2009).

In Quentin Tarantino’s World War II film, Roth plays the Bear Jew, a member of the Basterds, an American Jewish fighting force that infiltrates Germany in order to kill Nazis. The Bear Jew quickly gains a reputation for carrying out this remit with fearsome brutality. One of the film’s most iconic scenes involves a captured Nazi officer who refuses to divulge information out of patriotic honor. Roth as the Bear Jew swaggers up with a baseball bat and beats him to death. He then crows triumphantly, “Teddy fucking Williams knocks it out of the park! Out of Fenway Park!” The Bear Jew is as American as baseball and home runs; he’s an image of Jewish masculine quintessentially American strength. In “Inglorious Basterds,” at least, Jewish people get to be John McClane.

Tarantino’s film sees this Jewish power fantasy as delightful, fun and exciting. But it also sees a downside. “Inglorious Basterds” is, in part, about how American film fantasies of murdering Nazis themselves partake of fascist logic. When you watch the Bear Jew beat the Nazi to death, you’re supposed to find it exhilarating and funny. But in the movie, the guy who finds filmed violence funny and exhilarating is literally Hitler. The end of “Inglorious Basterds” is set at a film screening where the Fuhrer chortles and snorts shrilly through a propaganda film in which a lone German hero murders dozens of Allied attackers.

It’s possible, of course, for Jews to put themselves into empowerment fantasies as Jews. That’s the appeal of the 2008 film “Defiance,” about a group of Jewish resistors in Belarus.

“Defiance” stars Daniel Craig, who is not Jewish, but is able to play the Jewish starring role because today for many audiences white Jewish people and white people generally are indistinguishable. The empowerment fantasy in “Defiance” is about Jews, specifically, but it’s abetted by the fact that Jewishness, for the expected American and European audience, doesn’t preclude whiteness.

What this means, as Roth’s “Death Wish” trailer shows, is that white Jews can put themselves into fantasies of whiteness. There is no contradiction for Roth in creating a white male fascist power fantasy, nor in imagining himself as the perpetrator of massive vigilante violence rather than as the victim of it. In Nazi Germany, Jews were conflated with criminals. But today in America it’s not white Jews who are disproportionately shot by police or incarcerated.

Roth takes “Die Hard,” and positions himself, not with the weasely foreigner, but with the all American male hero. White Jews can choose to look like the white dudes, if we want; we can identify with Bruce Willis, secure in the knowledge that fascism won’t turn on us. Or so some white Jews like to tell ourselves, at any rate.