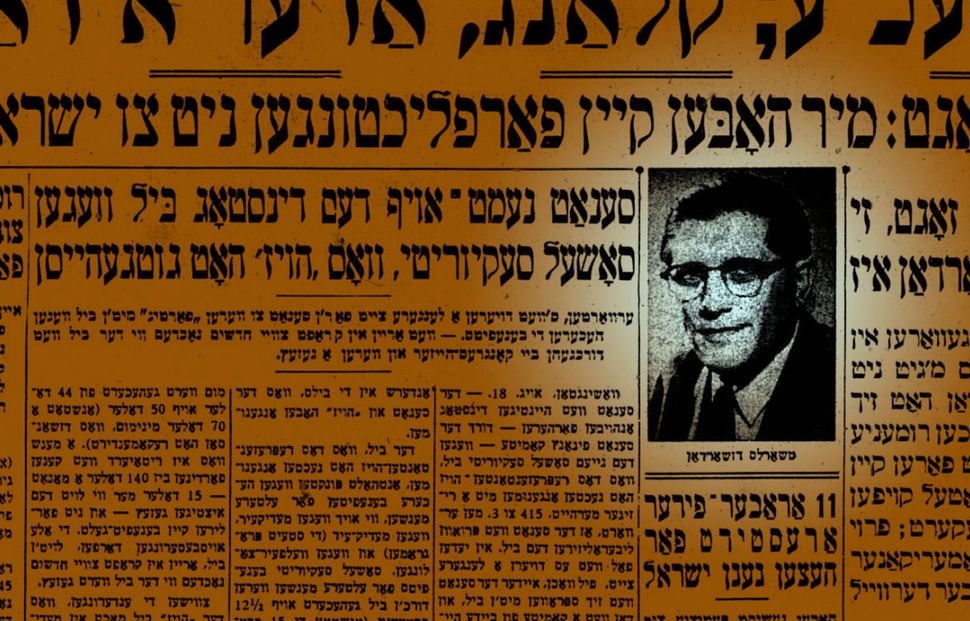 Charles Jordan was known as the “Father of Refugees” for good reason. Through the most tumultuous years of the 20th century, he devoted his life to helping Jews and later Palestinians, Vietnamese and others flee war, oppression and conflict, earning a global reputation for shaping the understanding of refugees and the issues connected to their resettlement, rehabilitation and reintegration.

Who knew that his extraordinary career would be overshadowed by his mysterious death?

And who could possibly have known that 50 years after a fisherman found his bloated corpse floating in the Vltava River in Prague, we still would not know what caused his death and who, if anyone, was responsible?

Jordan was the executive vice chairman of the American Jewish Joint Distribution Committee. He was last seen alive the evening of August 16, 1967, leaving Esplanade, the hotel where he and his wife were staying, supposedly to purchase a newspaper. He never returned. His body was recovered four days later. He was 59 years old.

Over the decades, explanations worthy of a John le Carré novel have attached themselves to the mystery of Jordan’s death. Some have blamed it on Middle East terrorists, or an undercover rescue operation gone awry, or a shadowy spy game, or an overdose of psychotropic drugs — all compounded by the secrecy of the Czech government under the iron grip of the Soviet Union.

And there are tantalizing mysteries within the mystery. The windows of the hotel room where Jordan stayed looked at the Egyptian Embassy; there was a United Arab Airlines office in the hotel, and its Czech secretary was a former agent of the Israeli intelligence. Was Jordan kidnapped and tortured by Egyptians with the consent of the Czech police, as many contend?

Martin Smok has heard it all. In fact, he told me by email from Prague, he has 11 theories about what happened and at least some evidence to prove them all.

Smok is a historian and documentary filmmaker who is about to publish a biography of Jordan in Czech, and who has been obsessed with his story since childhood. Born in 1971 and raised under communism, Smok told me that one of the carefully concealed, illegal books in his family home was by the Czech Secret Service defector Josef Frolik.

“Of course, I read it and kept rereading it, despite the strict parental prohibition,” Smok recalled. “A whole chapter in that book is dedicated to the Charles Jordan case. So I literally grew up with the Jordan mystery.”

Jordan was born in Philadelphia and raised in Berlin; he and his German wife fled to Prague in 1933 after he Nazi storm troopers attacked him. They were able to make their way to the United States. a year later. This early experience as a refugee was formative, Smok said: “He always recognized the individual human beings behind the label ‘refugees,’ and there are thousands of anecdotes attesting to that.”

A frequent visitor to Israel, Jordan could hardly walk down the streets without being thanked by those he assisted, according to the JDC archives. Though he and his wife had no children, he once remarked to an interviewer, “’Do I need children of my own when I have many thousands of them throughout the world?’”

His long association with the JDC took him all over the world. To Cuba, where he assisted refugees who fled Nazi Germany. To Shanghai, where he helped provide relief and rehabilitation to 15,000 Europeans. To Paris, where he worked with government and international agencies to find safe havens for thousands more.

His last official trip for the JDC was to Bucharest, where he signed an agreement to provide a wide-ranging assistance program to the Jews of Romania. The summer visit to Prague was billed as part of a vacation, but some doubt that it was indeed the reason, given the volatile political context for Jews just months after Israel’s swift humiliation of Arab armies in the Six Day War. There were even reports that Jordan was warned not to go to Prague. Adding to that, he was part of a controversial project to permanently settle Palestinian refugees in other Middle Eastern countries, which was unpopular with Arab governments.

When Jordan did not return to the hotel that night, his continued absence made headlines around the world. “Search For ‘Joint’ Leader Who ‘Disappeared’ In Czechoslovakia; Rumor Of Arrest,” the front page of the Forverts screamed on August 19, 1967.

But no culprits were ever found, and despite decades of agitation by the JDC and others, the Czech authorities have insisted the case is closed. Ironically, the only person actually punished in connection with Jordan’s death is Smok. In 2004 he came upon new information suggesting that Jordan was involved in a shadowy spy game. Rather than being rewarded for his efforts, however, Smok was interrogated and slapped with a hefty fine for “stalling” a murder investigation.

And now here comes another twist. After decades of research, digesting all the primary sources and interviewing anyone he could find connected with Jordan, Smok does not believe he actually was murdered.

Instead, he believes something more personal was at work. “It just does not make any sense,” he told me. “Right now, I would give 85% probability to an event connected to depression, frustration and a loss of meaning of one’s life. The rest is media, politics of the Cold War, ignorance and the need for propagandistic ammunition again the enemy.”

“Charles Jordan died at a time so politically charged that nobody was willing to accept something as banal as a depressed, trapped man no longer able to face the future.”

While Smok acknowledged that new evidence could still emerge, his dramatic and surprising conclusion upends half a century of conjecture and assertion. I have no way of independently evaluating his claim of suicide, and it still strikes me as unlikely, given all the other clues. The JDC declined to comment.

“Why is the story relevant today?” Smok asked, and then answered his own question. “The story of Charles Jordan as an advocate for the refugees, against all odds and at any cost, that is what is relevant, and will always be. Whatever happened to him at the end of his life will never be as important as his deeds while he was still alive.”

Jane Eisner is the editor-in-chief of the Forward. Contact her at [email protected]