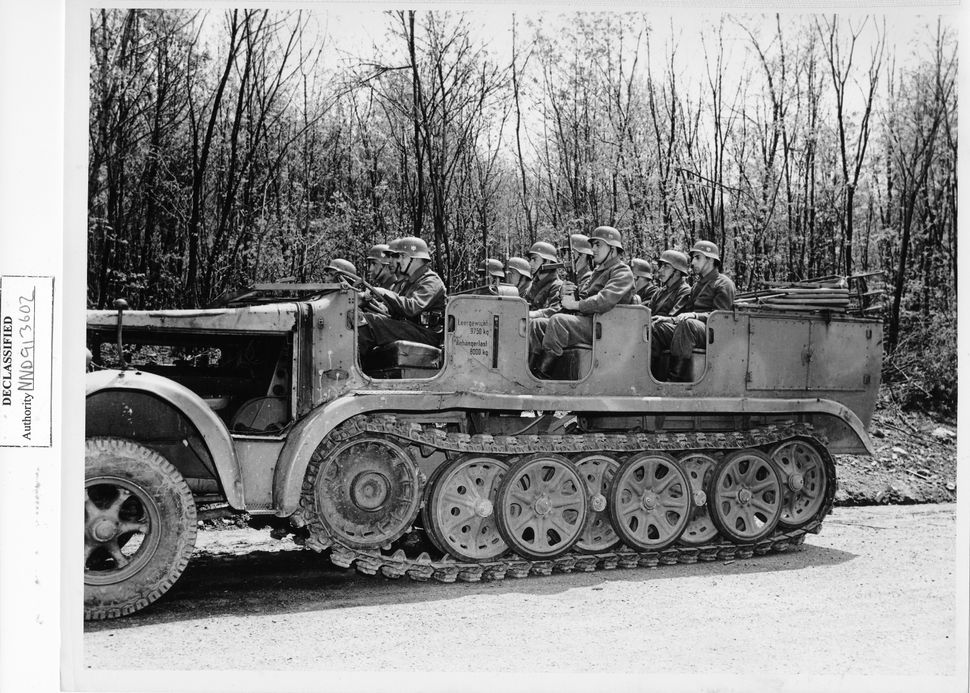 Sons and Soldiers: The Untold Story of the Jews Who Escaped the Nazis and Returned with the U.S. Army to Fight Hitler
By Bruce Henderson
William Morrow, 448 pages, $28.99

As the Nazi noose pulled ever tighter in Germany, many Jewish families prioritized sending their eldest sons to freedom. A few years later, some of these sons – inspired by both patriotism and the desire for revenge – embraced assignments in U.S. Army intelligence, where their knowledge of German language and culture proved invaluable.

Bruce Henderson’s unfailingly admiring “Sons and Soldiers” pays homage to their achievements. His sources include a handful of these so-called Ritchie Boys, as well as their descendants, their memoirs and a documentary about them. At times, his narrative — simply written for a general audience — achieves a rare intimacy, putting readers in foxholes and interrogation rooms.

Henderson divides his story into three sections. The first describes his protagonists’ early lives and their escapes from Nazi Germany. The second details their U.S. military careers, focusing on their resourceful, occasionally quasi-comic efforts to pry vital information from captured German soldiers. The final, briefest section covers the war’s aftermath, including the men’s encounters with the remnants of concentration camps and their quests to discover the fate of their relatives.

Henderson’s chronological narrative jumps from character to character. That creates some repetition (all the men, for example, had similar training at Camp Ritchie, Md.) and complicates the challenge of distinguishing one Ritchie Boy from another. It can be hard to remember which grew up struggling in an orphanage, which hailed from a bucolic rural town, and which enjoyed a middle-class Berlin childhood.

Despite a rocky start, the orphan, Stephan Lewy, had a happier story than most. Lewy was only six in 1932 when his father, Arthur, an impoverished widower, consigned him to a Berlin orphanage. Arthur, a socialist, was arrested by the Nazis in 1933 and interned in Oranienberg concentration camp. Released in 1935, a physical wreck but, in Lewy’s recollection, a warmer emotional presence, he married a woman who would become Lewy’s loving stepmother. Traveling with a group of orphans, Lewy made it to France, and was eventually able to reunite with his parents in America.

Martin Selling’s ordeal in Nazi Germany was particularly harrowing. In November 1938, during the Kristallnacht roundup of Jewish men, the 20-year-old Selling was arrested in his home town of Lehrberg and sent to Dachau concentration camp. Henderson vividly describes the filth, freezing temperatures, brutal guards and starvation diet that Selling encountered. Through an aunt’s efforts, Selling was released and was able to emigrate, first to England, then the United States.

Werner Angress grew up in Berlin, a blond-haired, blue-eyed Jew from a bourgeois family. After his father flouted German currency laws in an attempt to save the family fortune, the teenaged Angress was obliged to voyage solo to Amsterdam. Later, under the sponsorship of U.S. banking magnate Lewis L. Strauss, he left his family in the Netherlands and traveled to America.

When war broke out, the United States designated these men “enemy aliens” because of their German origins. They were barred from enlistment, and subject to discrimination after being drafted. Eventually, though, their status changed: Their language skills and cultural background made them eligible for special intelligence training, paired with the perk of a quick path to U.S. citizenship.

Henderson, sticking with his characters, doesn’t explore the higher-echelon decision making involved. But he makes clear the men’s enthusiasm for their new assignment. “We were fighting an American war, and we were also fighting an intensely personal war,” says Günther “Guy” Stern, who had emigrated from picturesque Hildesheim.

Before shipping out to Europe, where they were attached to different military units, some Ritchie Boys anglicized their names and changed the religious designation on their dog tags — protection in case they were captured by the Germans. It turned out to be a wise, if not foolproof, precaution. Henderson tells the story of two captured Ritchie Boys, identified by their own former prisoners as “Jews from Berlin,” who were separated from other American prisoners of war and shot in the back.

Henderson’s primary protagonists were more fortunate, though they encountered their share of danger. Jumping behind enemy lines, Angress was wounded, seized by German troops, and strip-searched. Later, under American artillery fire, he ended up playing chess with his former interrogator, who told him, “This whole war is insane.” When the prisoners he interrogated asked whether they would be tortured or shot, he had a standard response: “No….After all, we’re not Nazis.”

There were lighter moments, too, including Guy Stern’s encounter with Marlene Dietrich on a USO tour. At one point, to obtain information about industrial targets, Stern impersonated a demented Soviet commissar. Clad in a Russian uniform and speaking German with a fake Russian accent, he declared: “That Nazi won’t even survive the transport to our Siberian salt mines!” The frightened captive eventually talked. Stern decided that “imagination could be an interrogator’s most important asset.”

The Allied triumph brought the Ritchie Boys face to face with Nazi atrocities. At Buchenwald, Lewy helped corral locals from nearby Weimer to clean up the concentration camp and bury the dead. Another Ritchie Boy, Manny Steinfeld, was involved in the arrest and interrogation of a man accused of being a particularly sadistic Gestapo chief at the Ravensbrück concentration camp.

Beyond revenge, there were also family reunions – but not many. Still, as Henderson details in a postscript, his characters had rich, successful lives in America. “The Nazis tried to wipe out my family,” Steinfeld says. “I am the sole survivor. But I have seventeen descendants, and that’s not too bad.”