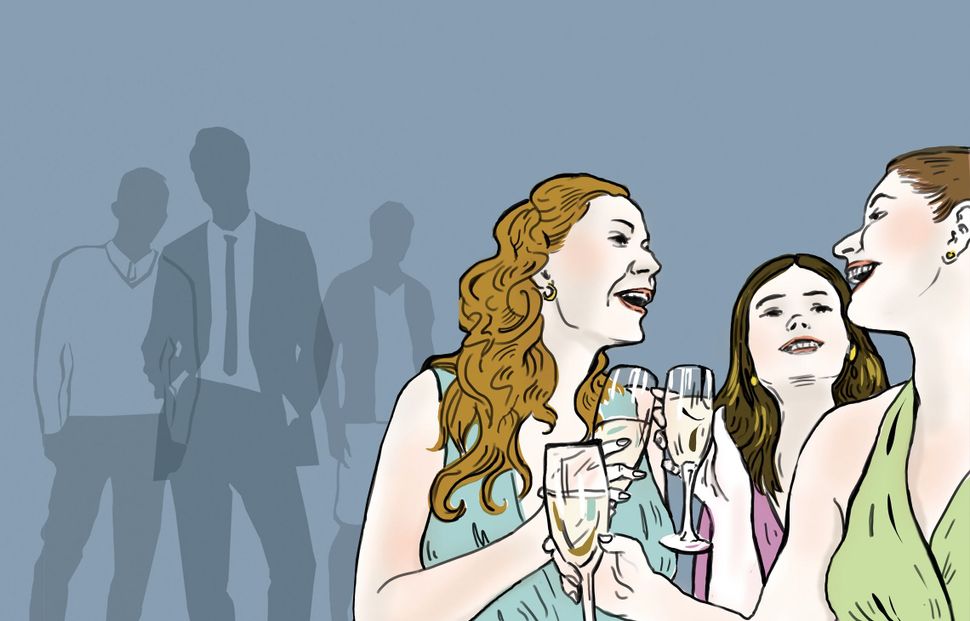 Last spring, I found myself sitting in the Hilton in midtown Manhattan with three other women and a matchmaker, discussing the actor version of our perfect man. I said Jason Segel because he’s funny and lovable. I had come to this initial group interview to research a potential story, but also out of personal interest — maybe I would get paired with someone. But as I sat there listening to two women gossip about whether or not a mutual male friend was cute, I realized this was the “girl talk” and sense of friendship I had been yearning for. In my previous relationship, my friends were my boyfriend’s friends. For three years, I went to his parties, watched TV with his roommates and spent the Fourth of July playing Wiffle ball with his high school buddies. After we broke up, I was free to hang with whomever I wanted.

When the meeting ended, the women and I walked across the tiled lobby together. One of the women said she was excited about the upcoming Sunset Soiree at the Museum of Jewish Heritage, making it sound like the Jewish party of the year. My ears perked up. Sure, there might be eligible single men attending, but mostly it just sounded fun — a chance to drink and party with like-minded people on a terrace. It’s hard to date in New York, but it’s even harder to make friends.

I had gone last year, The DJ played music so loudly that we had to scream into each other’s ears. People pushed toward the bar like they were trying to get on the last lifeboat out. Men loosened their ties. Girlfriends played with props in front of the photo booth. Eventually the party spilled onto the stairs. By time I left, I felt buzzed and happy.

Since then, I have been to about a dozen similar events. Usually I end up bonding with the women over our shared dating woes, all the while sizing up the men huddled near us. One woman frequently messages me on Facebook to attend her meetups. Another sends me email invites to Jewish parties. In terms of finding a boyfriend, the events are usually duds, but they’ve made me feel welcomed into a community.

As I rode the subway downtown to the museum, en route to this year’s Sunset Soiree, I felt hopeful. I set off for the walk across Battery Park from the 6-train subway station just as rush hour heated up. After-work folks strolled along the tip of Manhattan and watched the sun set over the Statue of Liberty. I emerged from a grove of trees near the far west side to see the museum looming. The elevators opened up onto the third floor, and I saw that the DJ was a friend of the matchmaker’s and of someone I had hung out with previously. We waved to each other.

I purchased a bottle of beer on the terrace and engaged in two somewhat boring conversations with men. I walked inside to fill a paper plate with pita, hummus and baklava. Outside there was an empty space at a standing table, occupied by two young women eating. They looked about my age. I tentatively approached, and with semi-full mouths they beckoned me to join them.

“So what brings you here?” I asked, scooping a dollop of dip onto the wedged bread.

As I suspected, they were friends and wanted to meet men. One had dragged in the other from New Jersey.

“Let’s just call this what it is,” the New Jersey woman said. Peering out over the crowd she said, “I wish the guys were walking around with a thought bubble of their bios over their head.”

“So you mean like real life J-Swipe?” I asked.

Over the next half-hour we played a game of “Which Jewish events have you been to?” and the New Jersey woman and I realized we planned to go to the same happy hour the following week. We exchanged bad dating stories and shook our heads in wonderment over the nonsense of men. Then a guy wedged into our conversation and briefly talked about baseball. After he left, the three of us looked at each other in a tacit agreement of “WTF. Wrong crowd.”

The New Jersey woman spotted a man she was obligated to meet — someone her mom knew. As she looked at him, she decided he was pretty good looking. I left to use the bathroom and when I returned the two were talking. I decided to slip out.

The next week I looked for her at the happy hour where we both said we would be going. I got caught up in a conversation with a doctor from Long Island and as he spoke, I looked around, wondering if she had arrived late. I didn’t see her. I wished I had gotten her number, because a good friend is hard to find.