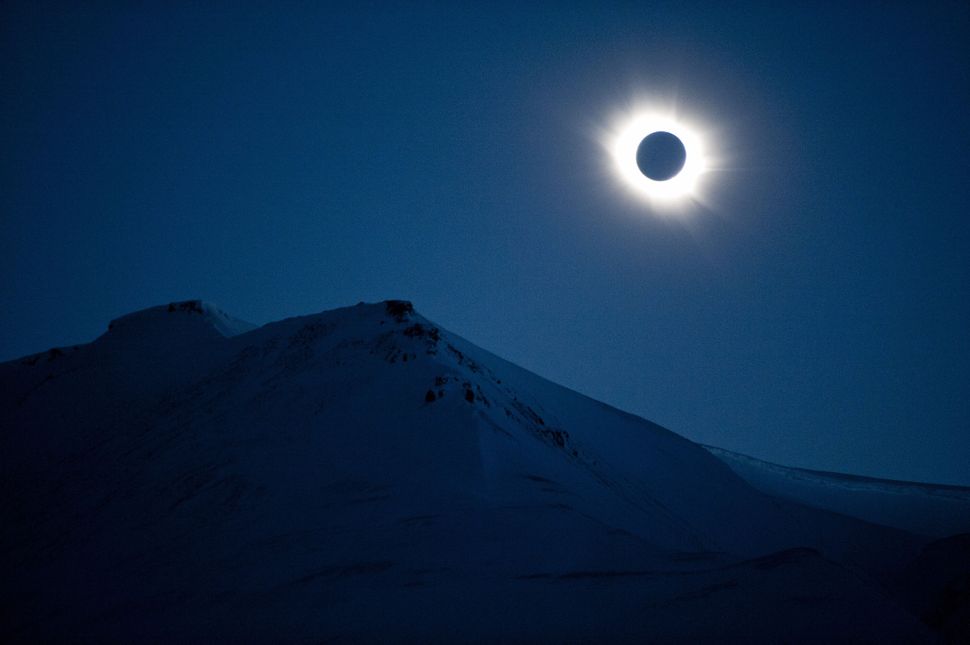 Across the United States, Jews are gathering in anticipation of the historic Great American Eclipse, particularly in cities known as ideal spots to experience the phenomenon.

But at the downtown Brith Shalom Beth Israel synagogue Sunday evening, nestled in the historic southern city perfectly positioned for the Monday event, Dr. Jeremy Brown had bad news for a group who had gathered for a kosher meal on “Eclipse Eve”: in traditional Judaism, an eclipse is nothing to celebrate.

“Eclipses happen because people sin,” he said. There’s no getting around it, Brown says. The Talmud – the central text of rabbinic Judaism – is unambiguous in its interpretation of eclipses – both lunar and solar, as a form of divine punishment – a curse to be dreaded and feared, rather than a miraculous wonder of nature.

If that isn’t bad enough, Brown told his audience of Charleston locals and Jews who had come to the city for the big event, the four sins specifically blamed by the Talmud plunging the earth into eerie darkness are so notably bizarre and politically incorrect, that nobody really wants to talk about them.

If these reasons sound random and unrelated with no possible connection, fear not – said Brown. Even the great medieval rabbi, Rashi, normally relied upon for his clear and concise Talmudic explanation of just about everything, was uncharacteristically clueless in the case of eclipse-triggering transgressions, writing “I have not heard any explanation for this.”

Brown, a doctor, who wrote the book “New Heavens and a New Earth: The Jewish reception of Copernican Thought” and recently published an article on “halachic and philosophical aspects” of the 2017 eclipse traveled from his home in Silver Spring, Maryland to Charleston to fully experience the eclipse first-hand.

For centuries, he notes, rabbis have wrestled with the Talmudic attitude towards eclipse. It contains, he notes, an inherent illogic in the Jewish approach that was clear even hundreds of years ago. Eclipses are a natural occurrence that is utterly predictable, they will take place no matter what any human being does. So how in the world, rabbis and scholars have asked, could they possibly be a result of sin or any form of human behavior?

As far back as 1609, Brown said, the Maharal of Prague, Rabbi Yehuda Loew tried to justify the Talmudic text by theorizing “if we lived in a world without sin, no eclipses would happen.” In his view, since human fallibility and sin are both inevitable, so was an eclipse. That attitude, however, leans closer to the Christian concept of original sin than to the traditional Jewish beliefs.

Another big problem with the Maharal’s theory as far as Jews are concerned, he observed – if there were never any eclipses, it would have to mean that the moon wouldn’t ever be able to orbit in the same plane as the sun and the earth. “The only way for there to be no solar eclipses in the Maharal’s imaginary sin-free universe would be for the moon to orbit the earth at 90° to the sun-earth axis. Then it would never come between the sun and the earth,” says Brown. This would wreak havoc with the Jewish calendar, which is based on lunar patterns – preventing “Rosh Chodesh” the beginning of the Hebrew month, that Jews consider a kind of a holiday.

The conundrum continued in the modern era, with famed Lubavitcher Rebbe Menachem Mendel Schneerson positing in 1957 that “while a solar eclipse was predictable, the local weather was most certainly not.” So presumably, if it was a cloudy day and the eclipse wasn’t visible, people hadn’t been sinful, but if it was clear and the sight was eerily abnormal – that meant the sins had taken place.

Schneerson was emphatic when it came to those who might be inspired to bless the event, writing that  “it is forbidden to institute a blessing that is not mentioned in the Talmud. And some say that the reason that no blessing was instituted is because the eclipse is a bad omen.” Brown says that the rebbe believed that if Jews should pray for anything – it would be that the eclipse shouldn’t happen. “Or maybe they should just cry ‘gevalt’!”

But, over the years, he notes it seems attitudes have softened. When Israel’s current Chief Rabbi David Lau was asked in 2006 was asked whether it wasn’t perhaps possible to view such a cosmic occurrence in a positive light and even say a blessing when it occurs if they feel a religious stirring. In his response, Lau admitted that he himself had also been awed when witnessing an eclipse, but that because the rabbis of the Talmudic era “had not prescribed a blessing over an eclipse, it was not possible to institute such a blessing today.” He added, however, that there was nothing wrong with reciting an appropriately celebratory and worshipful psalm, and even recommended a few for the occasion.

Brown, an observant Jew himself, endorses Lau’s approach, as do, he says, most of today’s rabbis. Even though an official eclipse prayer may technically be out-of-bounds for the faithful, he thinks a “memorable celestial event” is indeed an occasion joyful attention and wonder – no matter what the Talmud says.   ]