The Secret Jewish History Of Sacco And Vanzetti, Executed Radicals 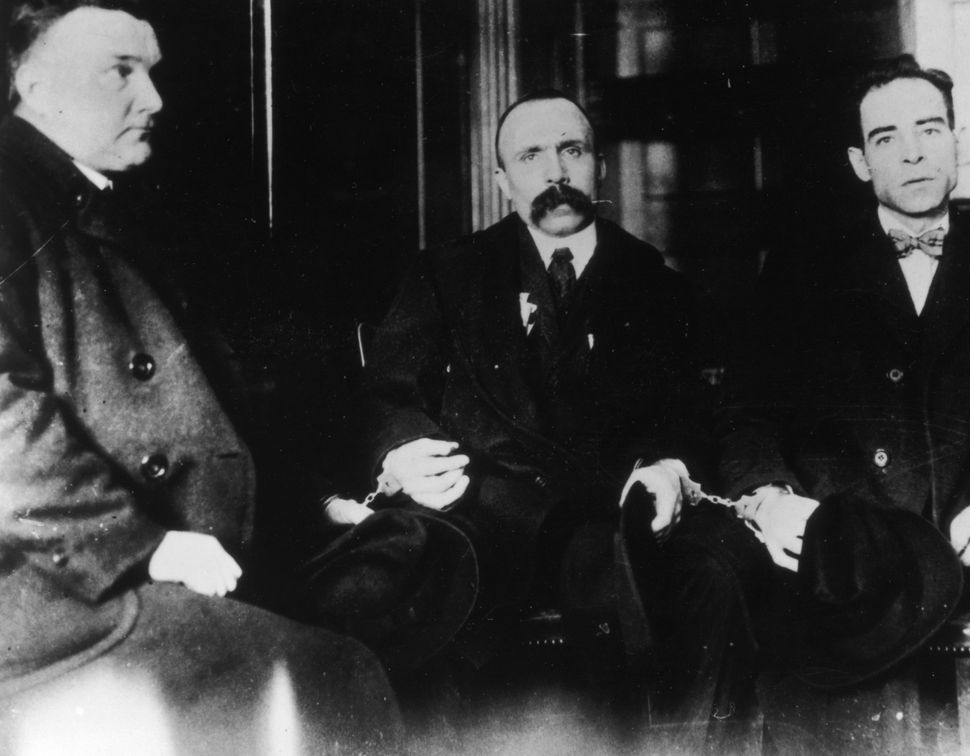 Just after midnight on Aug 23, 1927, 90 years ago today, the anarchists Nicola Sacco and Bartolomeo Vanzetti were sent to the electric chair in Boston’s Charlestown State Prison.

Sacco and Vanzetti, Italian immigrants who formed part of a radical anarchist milieu, had been convicted of the 1920 murders of a shoe-factory paymaster and the man who had escorted him while he transported money down the main street of South Braintree, Massachusetts.

Sacco was a shoemaker and Vanzetti a fish-peddler. Both were passionate idealists. The evidence that convicted them, largely circumstantial, is contested to this day.

At the time, the trial was regarded by many as a politically and racially motivated injustice, coming both at the height of the Red Scare and during an era in which the American government restricted Italian immigration through discriminatory quotas. The episode attracted worldwide attention and protest, becoming one of the most notorious trials of the 20th century.

The money stolen in the crime was never recovered, neither Sacco nor Vanzetti had a previous criminal record, and an ex-convict, Celestino Madeiras, confessed to the murder in 1925, absolving Sacco and Vanzetti of any involvement. Madeiras was later found guilty of a murder of a bank cashier to which he also confessed, yet his word was not accepted as sufficient reason for a new trial for Sacco and Vanzetti.

Despite seven appeals, their request for a new trial was rejected. The two were sentenced to death in April 1927.

The prosecution of Sacco and Vanzetti, while widely believed to be an instance of, in H.G. Wells’s words, wrongly executing “Reds as murders,” was informed by three decades of anarchists employing violence as a form of propaganda. 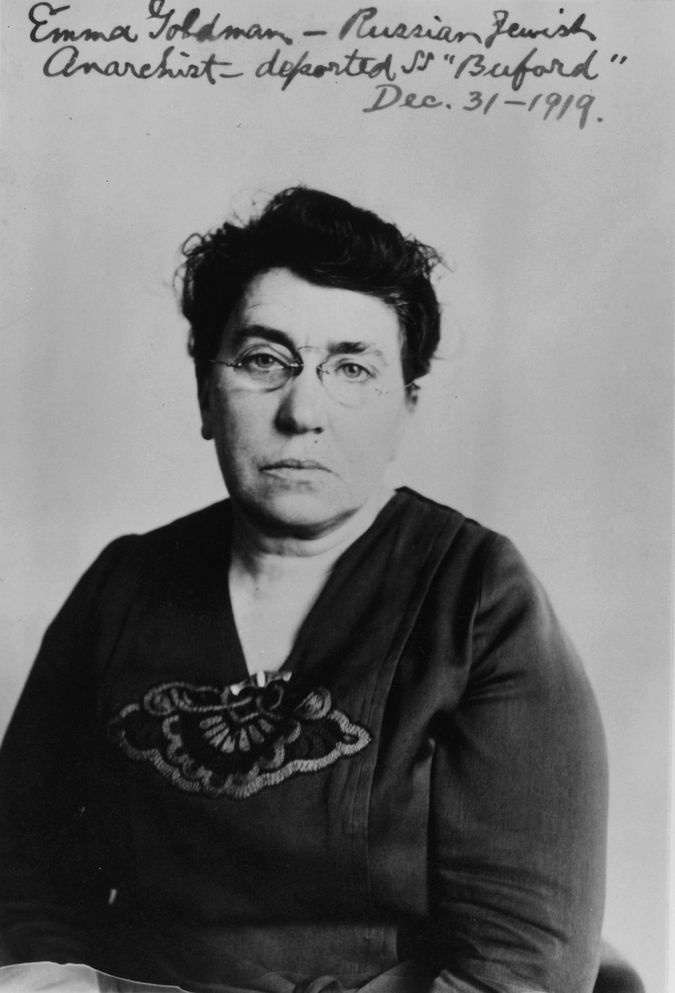 In 1892 Emma Goldman and Alexander Berkman, Jewish anarchist writers and radicals, were involved in a failed attempt to assassinate the industrialist, financier and union-buster Henry Clay Frick. Goldman and Berkman intended the assassination as “propaganda of the deed,” an action intended to foment revolution.

The concept of violence as propaganda was also embraced by Luigi Galleani, an anarchist of whom Sacco and Vanzetti were believed to be followers. Galleani and his followers, known as Galleanisti, carried out a series of bombings and assassination attempts between 1914 and 1932 against people and institutions they considered to be enemies of laborers and the poor. The violent activities of Goldman, Berkman and the Galleanisti were arguably key factors in the hostility towards anarchists and radicals whipped up by defenders of the status quo in the years before Sacco and Vanzetti’s arrest.

Felix Frankfurter, a Jewish lawyer who was then a professor at Harvard Law School and later became a Supreme Court justice, argued passionately for the men’s innocence.

Frankfurter protested what he claimed was the unjust nature of the entire case, eloquently arguing in an article in the Atlantic what many were saying – that the trial was driven by a strong bias against immigrants and political radicals. Presiding Judge Webster Thayer’s 25,000 word judgment, Frankfurter wrote, was “a farrago of misquotations, misrepresentations, suppressions, and mutilations”.

Many Jewish socialists mobilized behind the cause of justice for Sacco and Vanzetti. The Jewish Labour Party of Poland (otherwise known as the Bund) petitioned the United States government for a stay of execution for the two. Communist activists in Jerusalem held rallies for them. Dorothy Parker was arrested at a protest against the conviction of the pair, and Albert Einstein wrote a letter in their defense.

Anatole France, the French writer and Nobel prize recipient who had fought the anti-Semitic witch hunt against Alfred Dreyfus, wrote in “Appeal to the American People” that “The death of Sacco and Vanzetti will make martyrs of them and cover you with shame. You are a great people. You ought to be a just people.”

Following Sacco and Vanzetti’s arrest, the Galleanisti and anarchists in the United States and abroad retaliated. In 1921, a bomb mailed to the American ambassador in Paris wounded his valet. For the next six years, bombs exploded at other American embassies all over the world.

On August 21, 1927 two days before Sacco and Vanzetti’s execution, the Industrial Workers of the World called for a three-day nationwide walkout to protest the pending executions. 1,132 out of 1,167 miners working in the Walsenburg coal district of Colorado participated in the walkout, and 20,000 protesters amassed on the Boston Commons.

Grief and anger followed the execution. Violent protests broke out in many major cities throughout the world. On Sunday, August 28, a two-hour funeral procession bearing huge floral tributes moved through Boston. Thousands of marchers took part, and over 200,000 came out to watch.

In the following decades, the memory of Sacco and Vanzetti continued to resonate.

Jews played a key role in keeping their legend alive. As Einstein wrote, “Everything should be done to keep alive the tragic affair of Sacco and Vanzetti in the conscience of mankind. They remind us of the fact that even the most perfectly planned democratic institutions are no better than the people whose instruments they are.”

In the early 1930s, Jewish artist Ben Shahn produced a series of 23 paintings related to the case, notably “The Passion of Sacco and Vanzetti,” now owned by New York’s Whitney Museum of American Art. A similar 60-by-12-foot mural by Shahn, executed in marble and enamel, is installed at Syracuse University. More recently the film, “Sacco and Vanzetti,” a major 2007 documentary about them with narration by John Turturro, was produced and directed by Peter Miller, who ascribed his motivation to his Jewish heritage.

“My own grandfather came to Boston as an immigrant, and like many Jewish and Italian newcomers, was brutalized by the cops,” Miller told the Jewish Journal in 2007. “My father was born in the Boston Jewish ghetto, and my mother couldn’t go to college because of the quota system.

Sacco and Vanzetti came to be regarded as philosophers and even as poets due to their eloquent writings and speeches, which the Sacco and Vanzetti Defense Committee disseminated during their trial in magazine and newspaper articles and pamphlets.

Towards the end of his life, Vanzetti wrote, “If it had not been for these things, I might have lived out my life talking at street corners to scorning men. I might have died, unmarked, unknown, a failure.”

“Now we are not a failure. This is our career and our triumph. Never in our full life could we hope to do such work for tolerance, for justice, for man’s understanding of man as now we do by accident.”

The Secret Jewish History Of Sacco And Vanzetti, Executed Radicals