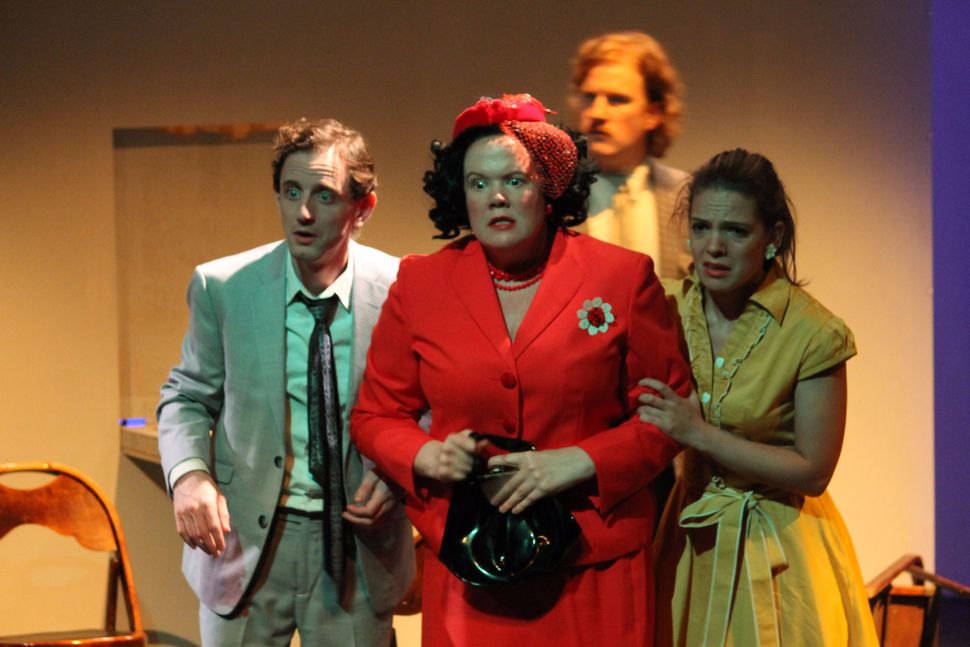 New Yiddish Rep’s (NYR) 2013 production of “Waiting For Godot,” staged to commemorate the 60th anniversary of Samuel Beckett’s great existential comedy, was ground-breaking. Its Yiddish speaking characters cast a new, more profound light on the masterpiece. Indeed, they evoked Holocaust survivors wandering across a post-apocalyptic landscape, especially as they talked about the ashes and the millions who were dead.

Director Moshe Yassur’s production was not only haunting, but also very funny. The performances were top-notch with NYR’s artistic director David Mandelbaum offering the most vividly complex — and hilarious — interpretation of Estragon this reviewer has seen.

Two years later the company tackled “Death of a Salesman.” The Jewishness of Willy Loman and his family had long been a matter of debate, with Arthur Miller himself — who was raised in a thoroughly Jewish milieu — coming down on either side at various points throughout his career.

But when the curtain rose on the NYR production, there was no question about the Lomans’ heritage. Their use of Yiddish elicited yet another level of “otherness” and underscored the image of “the wandering Jew,” a perfect metaphor for the traveling salesman, Willy Loman.

For the first time, “Death of a Salesman” — a play that has never spoken to me — hit an emotional chord. In Yiddish, the very familiar dialogue became palpably real and urgent. As the enraged and anguished title character, Avi Hoffman was a revelation.

The company’s central mission is forging vital theatre that can reach a broad audience, not only Yiddish speakers. English (and sometimes Russian) supertitles are provided. Mandelbaum has said his ambition is to keep Yiddish alive and show how singularly expressive and modern the language is. Equally important, he is determined to train a new generation of Yiddish speaking theater artists who may or may not be Jewish.

The production received fine reviews though I found its melodramatic, “Lower Depths” elements a tad off-putting and it felt dated to me. The wordy, archaic language and uneven acting didn’t help.

Still, Mandelbaum’s depiction of a morally bankrupt rabbi was very entertaining, and its cast, a demographic amalgam, was fascinating. It included native Yiddish speaking ex-Hasidim, Jewish actors who were speaking Yiddish for the first time and Gentile Yiddishists who are recognized scholars in the field, e.g., Caraid O’Brien and Shane Baker.

Some members of that cast are back for NYR’s latest production, Eugene Ionesco’s 1959 absurdist comic-tragedy “Rhinoceros,” which is running Off-Broadway at the Castillo Theatre, through Oct. 8. The Yiddish translation is compliments of Eli Rosen, who made his acting debut in “God of Vengeance.”

“Rhinoceros” recounts the transformation of ordinary, banal poor souls into a marauding herd of rhinoceroses. Initially, they are horrified by the rhinoceros; in varying degrees they resist their own metamorphoses, but in the end, with one notable exception, they can’t wait to shed their human skin.

Ionesco, a Romanian-born anti-fascist, wrote the play as a searing indictment of Nazis and especially their all-too-willing collaborators, but over the decades many critics have viewed the play as a commentary on the evils of any form of authoritarianism, conformism and mob mentality.

Specifically, “Rhinoceros” tells the story of Berenger (Luzer Twersky), a genial and feckless Everyman who finds himself increasingly isolated as everyone around him turns into a beast, including his close pal, the pompous and opinionated Jean (Eli Rosen) and his girlfriend, the sweetly flirtatious Daisy (Malky Goldman). In the end, he is left alone, bellowing “I will not capitulate!”

The acting throughout is highly stylized and the animals are largely represented through a soundtrack of pounding hoofs, grunts, growls and snorts. Towards the conclusion rhinoceros heads are popping out from behind the curtain.

For the most part, the performances are impressive especially in light of the fact that many of these actors are newcomers (or relative newcomers), most pointedly Rosen whose “Rhinoceros” stint marks his debut as a lead. He makes the windbag fully believable. Similarly Twersky is a comfortable presence onstage — that was also evident in his performance as a sleazy pimp in “God of Vengeance” — fully inhabiting his beaten down, struggling and conflicted Berenger.

But cutting edge as this play was in its day, today it feels heavy-handed, repetitive and passé, though undoubtedly the NYR’s creative team and many in the audience will choose to see parallels between what’s enacted on the stage and Trump’s America. Useless to argue there is no parity and to suggest it is to trivialize the impact of the Third Reich, its collaborators, and the Holocaust.

For the most part the play seems to be about the rise of political fascism in Europe of the 30s. At various points boisterous Nazi rallies can be heard offstage and in one scene a character begins his transformation to rhinoceros-land by goose-stepping around the stage and ultimately thrusting his arm upwards in a “Heil Hitler” salute, bringing to mind Peter Sellers who cornered the market on that one in “Dr. Strangelove.”

At other times to judge by the rotary phone, manual typewriter, and especially costumes, the play is unfolding in a secular America of the 50s, or maybe even the early 60s. At other junctures, characters make reference to “fake news.” And to add yet another layer, Rosen says he has translated the play through the prism of an enraged ex-Hasid, though in the end hopes it speaks to everyone.

“Rhinoceros reminds me of the personal struggle of many of my current and former co-religionists who are trapped in their bodies and uncomfortable in their own skin,” he writes in the program. “All too many of them are prisoners of conscience who in public tout their lifestyle as higher and more sublime, but in private yearn to be free of their social constraints. My Yiddish translation of ‘Rhinoceros’ highlights that struggle. It is my hope that Ionesco’s fantastical trumpeting, filtered through the musicality of Yiddish, will penetrate the high walls of ghettos and sound the shofar of freedom to humans everywhere.”

Clearly the theatrical intent throughout is to hint at some kind of universality: oppression can exist anytime anywhere and must be resisted. But the result on stage does not conjure up universality at all, just a lack of definition and cohesion.