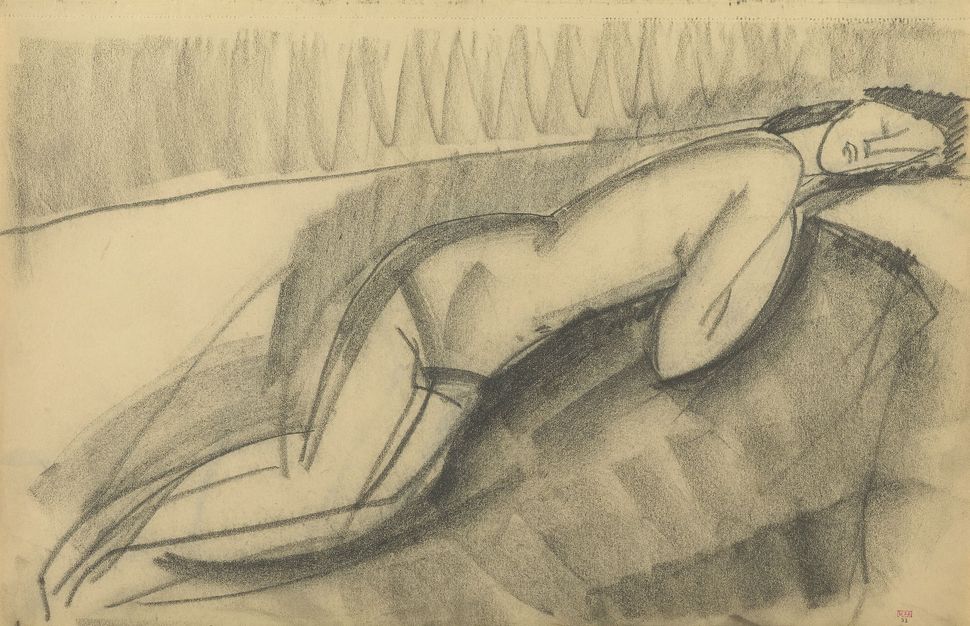 Modigliani Image by The Jewish Museum

The covers of both feature caricatures of Jewish men, their features overblown and bulbous.

Hung on a nearby wall is Modigliani’s 1908 painting “The Jewess,” a study in jewel-toned oil paints. The subject is, most probably, Modigliani’s mistress Maude Abrantès, a married American Jew whose visage appears in several of the exhibit’s drawings. She appears statuesque and guarded. Her face is slender, her features angular, her bearing aristocratic.

The ability to compare these two images — Drumont’s Jew and Modigiliani’s “Jewess” — is one of the pleasures of the exhibit which features artwork primarily from the collection of Dr. Paul Alexandre, an early friend of Modigliani in Paris, who was also his first and most dedicated patron. Alexandre preserved over 400 of his friend’s drawings from the period between 1906 and 1914 – a trove that wasn’t publicly revealed until 1993, when Alexandre’s son Noël published reproductions of the work in a book.

Amedeo Modigliani, the painter and sculptor who died of tuberculosis in 1920 at the age of 35, has had a number of afterlives. His early death, followed by the tragic suicide of his fiancée Jeanne Hébuterne, then pregnant with their second daughter, has made him a subject of morbid romantic fascination. His art has become some of the most highly valued in the world; in 2015 one of his paintings fetched $170.4 million at a Christie’s auction, then the second-highest price paid for an artwork in such a venue.

But as the exhibit protests, occasionally clumsily, in the popular eye, Modigliani’s Jewishness has traditionally been considered less pertinent.

Born to a Sephardic family in the Tuscan town of Livorno in 1884, Modigliani moved to Venice in 1901, seeking a cosmopolitan artistic haven. Having heard that Paris better suited the bill, Modigliani migrated there in 1906. That same year, the Dreyfus affair, a scandal over the contested 1894 treason conviction of the Jewish French army captain Alfred Dreyfus, resolved in an official recognition of its subject’s innocence. While he had been exonerated, the wave of anti-Semitic sentiment and violence that the conflict over his conviction had provoked continued to affect Parisian society.

Modigliani, according to those who knew him, spoke fluent French and bore few of the physical markers that would have led others to suspect his Jewishness. Had he not taken to introducing himself by saying “je suis Juif” – “I am a Jew” – he would likely have come off as just another bohemian artist.

His artwork, of course, prohibited that outcome; not every artistic-minded denizen of a fin-de-siècle Parisian garret made work that, a century after their deaths, sells for seven figures. But in light of his status, however masked, as being somehow outside Parisian society, the artistic characteristics for which he became known — elongated, precise, mask-like faces, stylized painted nudes, the pronounced influence of non-Western art forms — can be seen as signals of a radical rejection of his society’s understanding of race.

So, at least, argues “Modigliani Unmasked,” while also positing that its subject, unusually for his time, employed foreign influences respectfully.

“While his peers were also appropriating ancient or non-Western art, he alone — with the possible exception of Elie Nadelman, the Polish-born sculptor — sought to directly challenge the assumption of European cultural superiority,” curator Mason Klein writes in the exhibit’s catalogue. According to Klein, Modigliani’s family indicated that the artist’s first experiences of anti-Semitism were his encounters with Drumont’s screeds in Paris. The shock of that city’s “social realities” — among them, presumably, deep racism — prompted him to engage in a profound investigation of the relationship between appearance and identity that included a rejection of artistic movements, among them the avant-garde and Futurism, that disdained figurative approaches to the body.

It’s an approach that the exhibit, to an extent, bears up. The qualities that so strikingly separate Modigliani’s “Jewess” from Drumont’s Jew are seen throughout the drawings, sculptures and paintings that comprise the rest of the exhibit. Modigliani’s emphasis on pared-down, idealized forms that deviated from accepted aesthetic standards is easy to understand as, in part, a response in which anti-Semitic caricature was considered a valid form of visual achievement.

But the guiding conceit of Modigliani as a societal and artistic rebel who managed to be the sole wise appropriator of his time is too forced of a thesis to succeed completely. It’s crafted to a modern moment in which the issue of cultural appropriation exerts powerful control, both for those who accept the premise that it’s wrong to lift elements of a culture to which you were not born for purposes of boosting your own profile and profit, and for those who — often vociferously — reject it.

Investigating the inequalities, misrepresentations and human costs of appropriation in the past is an important endeavor. But forcing Modigliani’s work into the charged framework of a contemporary debate gives short shrift to the force of the art examined and flattens his deservedly complex legacy. One gets the feeling that the Museum’s discussion of Modigliani’s incorporation of African, East Asian and ancient influences has been mounted with the idea that if a fine enough argument in his defense is crafted, his legacy will be safe from the very questions that they themselves explore.

Modigliani was an artist of expansive vision and rigorous practice. One wonders how the exhibit might read if those who organized it trusted its audience to adopt a similar mindset. It is possible to adore an artist — and who could refuse to adore this one? — appreciate his complex motivations alongside his complex accomplishments, and be open to the idea that his artistic practices might have contributed to a trend that caused, to whatever ephemeral degree, some harm.

The last item of the exhibit, following a wall of extraordinary painted caryatids — Modigliani had a productive fascination with the ancient Greek sculptures, which doubled as structural supports — is a death mask of Modigliani, cast in plaster by the artist Moïse Kisling and Conrad Moricand, who botched the job, leaving it to be salvaged by the sculptor Jacques Lipchitz. John Updike reflected on the object in a 1960 poem published in The New Yorker, asking “Could the man have been that small?” Perhaps in life. No need to be in legacy.

Talya Zax is the Forward’s deputy culture editor. Contact her at [email protected], or on Twitter, @TalyaZax