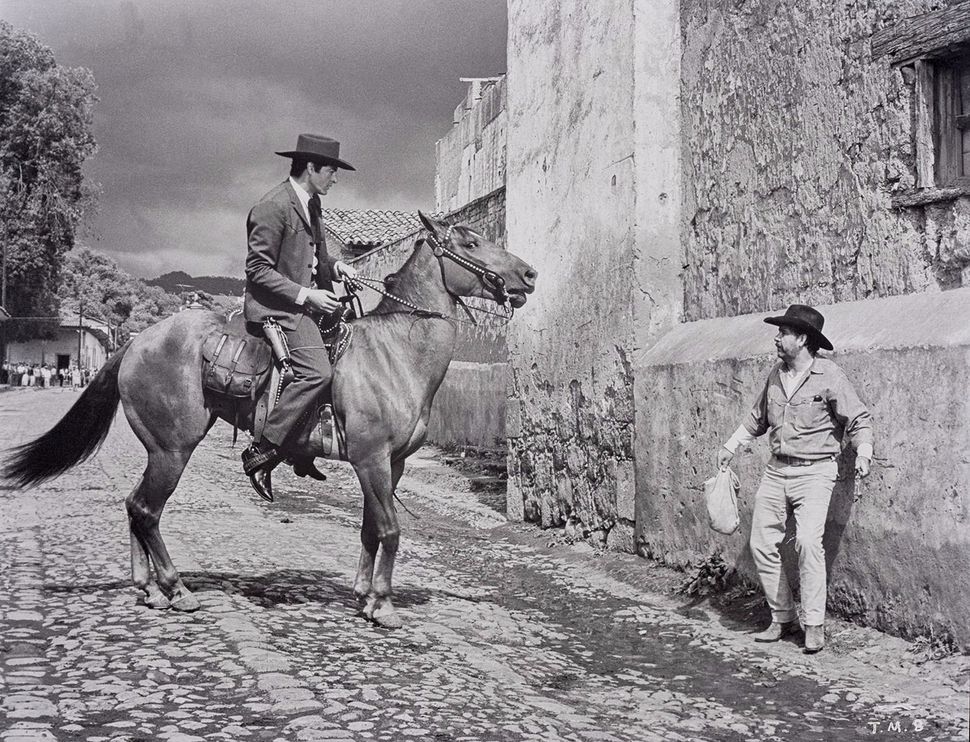 Machismo has become a sort of catchall phrase for aggressive masculinity, but its original meaning refers to something more specific, stranger, and more dangerous. It is this latter definition that propels the action of the recently-resurrected 1966 film “Time to Die” that is playing at Film Forum through Thursday, September 21.

I’m not an expert, but I would imagine that one character’s description of his father as “the best with guns, women, and horses,” illustrates that idea rather well. Revealingly, the speaker’s father is long dead, having fallen victim to these proclivities.

The film’s protagonist is his killer, Juan Sayago, who eighteen years ago outdid his skill with guns. Having served his time, he returns to his sleepy, dust-laden hometown to find that the man’s sons intend to make him pay a still greater price. The younger son, Pedro Trueba, seems warmer and more reasonable, preparing for marriage to a local beauty. His brother Julian, however, is monomaniacal in his bloodlust. He maintains ramrod posture and dresses in the anachronistic garb of an autocratic rural don, attempting to goad our hero into challenging him. For his part, Sayago is peaceable and world weary, equally unwilling to flee or fight. “Honor’s not about making boasts,” he tells his oppressor, “and dignity comes only through suffering.”

“Time to Die,” marked the debut of Jewish-Mexican filmmaker Arturo Ripstein, who was a mere 21 years old at the time of its production, kicking off an extraordinarily productive career (Ripstein remains active in his seventies). He had help from a legendary band of collaborators. The script was written by a then obscure Colombian novelist — and occasional film critic — named Gabriel Garcia Marquez, who in turn recruited his pal Carlos Fuentes. Actress Marga López, likely best known for her role in Luis Buñuel’s “Nazarin” (1959), plays the woman our protagonist was engaged to before he was sent away, while Sayago is portrayed by the ideally cast Jorge Martínez de Hoyos.

His hulking frame softened by the years, the kind-eyed Sayago invokes substantial pathos from the moment he appears in frame. In contrast to the violent bluster of the Trueba boys, the man formerly known as “bulletproof Juan Sayago” dons quaint reading glasses and shows off the knitting skills he developed in prison. As the film progresses, details emerge implying that Sayago’s crime may not have been murder, that Trueba the elder waged an extended, psychotic campaign of harassment and provocation.

So definitively does the film appear to cast in its lot with wizened experience over hotheaded youth, that it can seem at points like the young filmmaker is trying to compensate for his inexperience by explicitly disavowing it. Yet Marquez’s script — and by extension, Ripstein’s film — gradually becomes more complex. For the most part, the townspeople, from Sayago’s former fiancée to Pedro’s current one, attempt to convince the brothers to give up their quest for vengeance and Sayago to get out of town. Everyone seems to understand that their continued coexistence represents grim inevitability, represented by Marquez’s insistent repetition of the words “jail” and “graveyard,” except for the main characters. After a point, Sayago’s saintly refusal to fight or leave appears radically obstinate, even violent. The echoes of his past become impossible to ignore. After all, it takes two to duel.

As the film progresses, the echoes and motifs of the script begin to dominate both the film and its characters. Ripstein eschews overtly expressive visual flourishes for a pragmatic, inescapable classicism, allowing the characters to move towards their destinies in the sober, unsympathetic light of day. Although firmly ensconced in the conventions and iconography of the western, the fatalism of the story recalls film noir, with Marquez’s script taking a painstaking pleasure in ensnaring the characters within the tendrils of their own pasts.

By its conclusion, we’re dealing with a film in many ways about determinism itself. Like in Greek tragedy, people can accept or fight against their fates, but the result will be the same. It’s there in the title: you can protest all you want, but it won’t make a difference when it’s time to die.