What Was Shimon Peres’s One Final Regret? 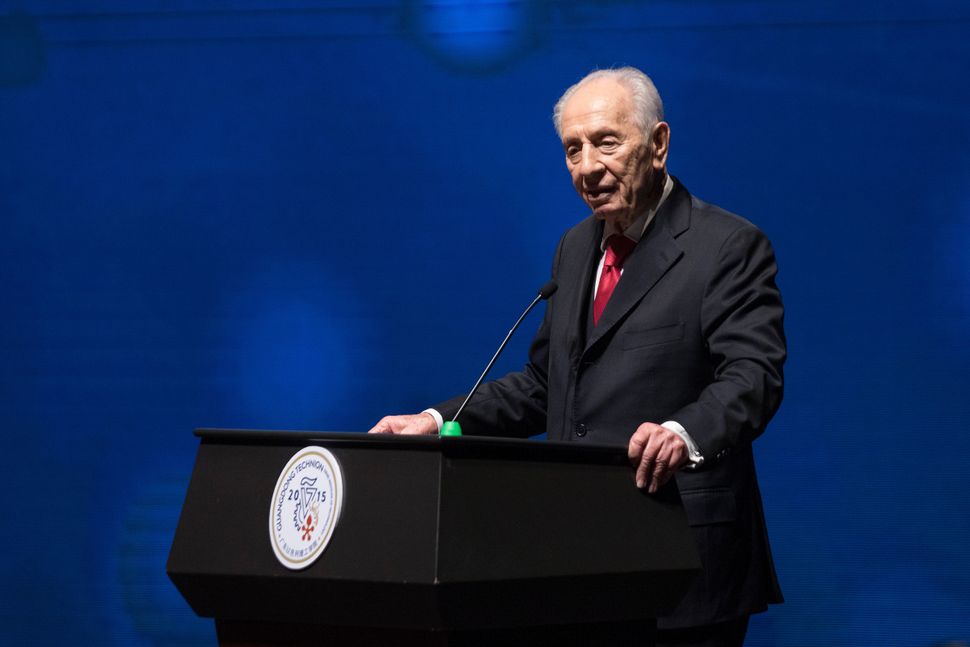 There remains, one year after his passing, a void in Israeli politics in the shape of Shimon Peres. The former president and prime minister was, as Amos Oz eulogized at his funeral in September 2016, a trailblazer who seemed constantly ahead of his time until the future arrived and vindicated him. Present at Israel’s birth, and central to its political life for over half a century, Peres is one of a few Israelis who can truly claim to be a world-historical figure. No wonder he has proved irreplaceable.

Now “No Room for Small Dreams,” his slender, almost wispy final book (written with assistance from the Democratic speechwriter Dylan Loewe), comes as a reminder of all that Israel has lost. It is history as memoir, if only by virtue of the fact that Peres has so often made history. Written in the final year of his life, the book narrows its focus to key episodes in Peres’s life — from his immigration to Palestine in 1934 to the assassination of Yitzhak Rabin in 1995.

These stations of his life emphasize Peres’s centrality to the construction of Israel. Most of these, by now, are well known. Peres built up the military in the state’s early years (with help from the Czechs, the Teamsters and Jimmy Hoffa), and in the 1960s he cultivated Israel’s nuclear program. He was defense minister in 1976 during the famed Operation Entebbe, while in the early 1990s he recognized the potential in backchannel talks taking place in Oslo between Israeli and Palestinian academics.

Some of this ground has already been covered in his other books: the 1995 memoir “Battling for Peace,” and the 2011 book “Ben Gurion: A Political Life,” a series of conversations with the late editor of Ha’aretz, David Landau. Others, like Peres’s restructuring of the Israeli economy as prime minister during the inflationary crisis of the mid-1980s, are not only too easily forgotten but also have a certain contemporary resonance, given Israel’s rebranding of itself as the “startup” nation (a cliché that Peres himself uses, and one that should be retired).

More often than not, the joy in “No Room for Small Dreams” is in the anecdotal details. Peres first met his mentor (and another world-historical Israeli) David Ben-Gurion on a car ride to Haifa from Kibbutz Alumot. Ben-Gurion slept most of the way but awoke close to the Mediterranean and, without warning, declared, “You know, Trotsky was no leader.” Peres asked why, and Ben-Gurion, red-faced and flustered, said: “‘No war, no peace?’ What is this? This is not a strategy. This is an invention. Either peace and pay the price or war and take the risk—there is no other choice.” Ben-Gurion immediately fell back to sleep.

Ben-Gurion is a dominant character in Peres’s life, side by side in momentous times. On the night the United Nations voted in favor of partitioning Palestine, Ben-Gurion told Peres: “Today they are dancing in the street. Tomorrow, they will have to shed blood in the street.” Peres was also close to Moshe Dayan, who had served as defense minister: “an equal and a mentor, a man I deeply admired.” In 1946, in response to Britain’s egregious restrictions on immigration to Palestine by displaced European Jews, Dayan suggested to Peres that “we burn down the camps where the British were detaining Jews.”

In the late 1980s Peres forged a special relationship with King Hussein of Jordan. They met in London for clandestine negotiations — a path to peace ultimately nixed by then-prime minister Yitzhak Shamir—at the home of the lawyer Victor Mishcon. At the end of dinner, Mishcon’s wife appeared to clear the table, at which point Hussein offered to do the dishes. “I could already picture the scene, two former enemies, standing side by side as friends, the foreign minister of Israel in charge of scrubbing, the king of Jordan in charge of drying.” She politely declined their offer.

At the same time, “No Room for Small Dreams” cannot help but fall into the traps set by the political memoir. Though Peres writes that his relationship with Rabin was a “rivalry [that] became a partnership,” the episode on Entebbe makes clear who Peres believes had the gumption and foresight to push for a dramatic rescue operation and who did not. (Some wounds never heal.) In literature as in life, Peres’s wife, Sonia Peres, who died in 2011, remains something of a hazy, incomplete figure, the romantic life secondary to the political one.

The selection process inherent in writing an episodic memoir also means that parts of Peres’s life fall by the wayside. It is a pity and a missed opportunity, especially given that this book was written in the twilight of his life. “No Room for Small Dreams” would certainly have been richer for having reflected on some of Peres’s failures and disappointments: the decline of the Labor establishment in the 1970s; the failed “dirty trick” to form a government of left and ultra-Orthodox parties in 1990; the dreadful shelling of Qana in 1996, during which more than 100 Lebanese civilians were killed, and his defeat to Benjamin Netanyahu in that year’s election, when Israel went to sleep with Peres and woke up with Bibi.

The present, embattled prime minister is conspicuous in his absence in this memoir. This is especially odd, given that Peres spent five years as Israel’s president, during which Netanyahu was also in high office. Yet he has no thoughts to offer about the man who has mastered Israeli politics for a decade now: neither his ideology nor their relationship. However, surely Netanyahu was in his mind when Peres writes that peace between Israel and the Palestinians will require “reasoned wisdom” from “leaders who understand that Israel is strong enough to make peace.”

“He had, it seemed, two contradictory qualities,” Oz recalled of Peres, “on one hand, a deep respect for reality and its constraints, and on the other hand, a fierce passion to change that reality and the emotional capacity to change himself.” Without Peres, what Israel is missing, above all, is his particular blend of optimism and realism that runs like a river through “No Room for Small Dreams.” Peres was somebody who embodied an oft-cited adage coined by his mentor Ben-Gurion that, in order to be a realist, one must believe in miracles.

It is this that marks Peres, with his numerous achievements not only on matters of peace but on security and economics, too, in contradistinction not only to the ghostly figure of Netanyahu but to the current American president as well. Not only Israeli politics but also the politics of the United States is currently enveloped by a stench of pessimism that emanates from the rotting head downward. Our leaders are not active but reactive, nostalgic as opposed to forward thinking, and are guided by what was or what is rather than by what could be. “I don’t regret any of my dreams,” Peres concludes. “My only regret is not having dreamed more.”

Liam Hoare is a freelance journalist and critic based in the UK.

What Was Shimon Peres’s One Final Regret?