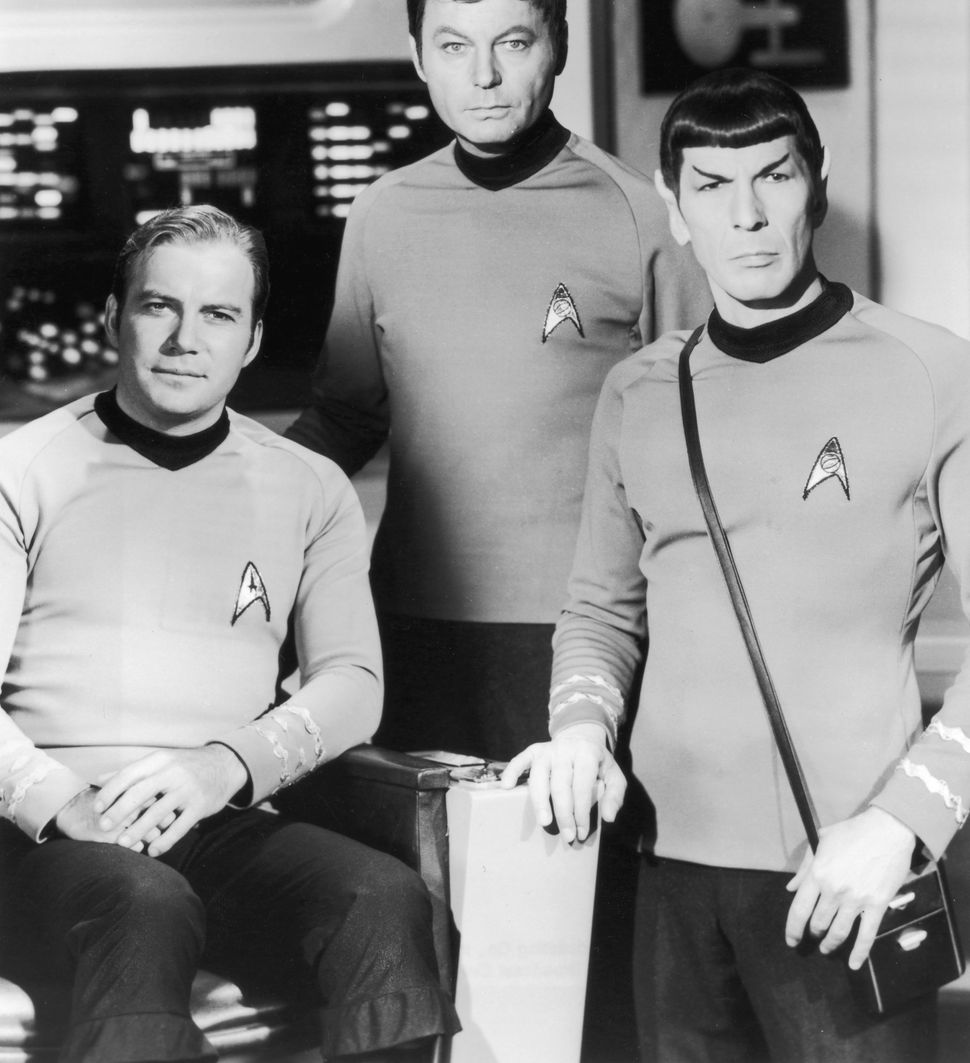 “Star Trek” has always embraced diversity. Gene Roddenberry’s vision of a utopian future was intentionally, ideologically inclusive. The first “Star Trek” series included Asian and black crew members, at a time when that was rare on network television. Later series featured a woman captain and a black captain. The new CBS show, “Discovery” is focused on two women of color playing the captain and the first officer.

There is one group, though, which, at the beginning, held a special place in the franchise’s diverse future. The leads of the first show, William Shatner (as Captain Kirk) and Leonard Nimoy (as Mr. Spock) were both Jewish. And the quiet Judaism of its bridge crew both showed the breadth, and the limitations, of Star Trek’s commitment to diversity.

Both Kirk and Spock in different ways, picked up on ideas and stereotypes about Jews. This is most obvious in the case of the alien, logic-driven Vulcan science First Officer, Mr. Spock. Spock’s Vulcan characteristics can easily be read as Jewish caricature; he has pointed ears and raised eyebrows, like a devil. Vulcan culture, seen in glimpses in the first series, is semi-Orientalized, including traditional dress that is vaguely Chinese, Indian and Middle Eastern, and a system of arranged marriages. Spock’s inhuman logic and scientific genius also fits with stereotypes of smart, nerdy Jews. Even the fact that Spock is half-human, neither fully human nor fully Vulcan, dovetails with the idea of Jews as rootless cosmopolitans, aliens who have no real home and no real roots.

In contrast to the alien Spock, William Shatner’s Kirk has no markers of Jewishness. But his perfect assimilation can be seen as a kind of marker of Jewishness in itself. If Spock is the Jew as eternal alien, the Jewish Canadian Shatner is the Jew as perfectly assimilated American, cheerfully racing from planet to planet, conquering the men and sleeping with the women. In fact, Shatner’s famously staccato, explosive vocal delivery turns into a kind of parody of hearty American normality. “Trek” fandom often presents Shatner’s flamboyantly campy heterosexuality as a gay goof; there is an infinite amount of fan fiction about Kirk and Spock falling in love. But the winking portrayal of Kirk could also be read as a Jewish goof — Shatner’s tongue-in-cheek representation of the perfect goy.

Having just one stereotypical coded representation of Jewishness could be offensive or tiresome. Kirk and Spock together, though is, at least for this Jew, exhilarating. “Star Trek” imagines a future in which Jews can be super-strong alien geniuses or commanding normal swaggering action heroes. More, Kirk and Spock are best friends, who enjoy each other’s differences — and both of them are, in their way, sex symbols. I’ve heard many Jewish men praise “Defiance” for its vision of Daniel Craig as a strong, daring, sexy, Nazi-fighting Jew. But some forty years earlier “Star Trek” had a duo of iconic Jewish heroes battling Klingons, cuddling Tribbles, and performing adorable crotchety Jewish comedy routines.

This is the great promise of “Star Trek.” The show imagines a future in which marginalized people can stand at the center of the universe, have fun adventures, and love each other. In that sense, Kirk and Spock provided a blueprint for all that followed.

Kirk and Spock also pointed to some problems, though. While the Captain and First Officer are played by Jewish actors, and are presented as Jewish in some ways, they aren’t actually Jewish within the story. Indeed, “Star Trek” has virtually never portrayed an actual Jewish character. Unless you count the ugly, big-eared, rat-like and avaricious Ferengi from DS9, an alien race which is an obvious (and shameful) Jewish stereotype.

The absence of Jews as Jews points to some of the ways in which the show’s hopeful future rings can ring hollow. While the show includes black people and people of color, it deals with issues of race and racism mostly by displacement. The society of the future is perfectly inclusive, which means that stories about intolerance and difference generally involve robots or aliens, or some return to the past. For example, in the episode “Planet of Force,” Kirk and Spock encounter a retro-Nazi society on a distant planet; a race called the Zeons stands in for the persecuted Jews. In DS9, Commander Sisko (Avery Brooks) experiences racism when he journeys into the past in the episode “Far Beyond the Stars.”

The future in “Star Trek” is exciting and hopeful because it’s post-racial. But being post-racial also makes it limited, and in some ways disappointing. “Star Trek” can’t exactly take a strong, consistent anti-racist stance, like the recent Australian television show “Cleverman,” because it’s default assumption is that racism no longer exists. Similarly, Jews can only take a starring role in the future if, paradoxically, Jews don’t really exist. “Star Trek,” rather gloriously, put a Jew in command of its first starship. But, as if to balance that out, it also, half a century later, has never shown us a Jew in the Federation.