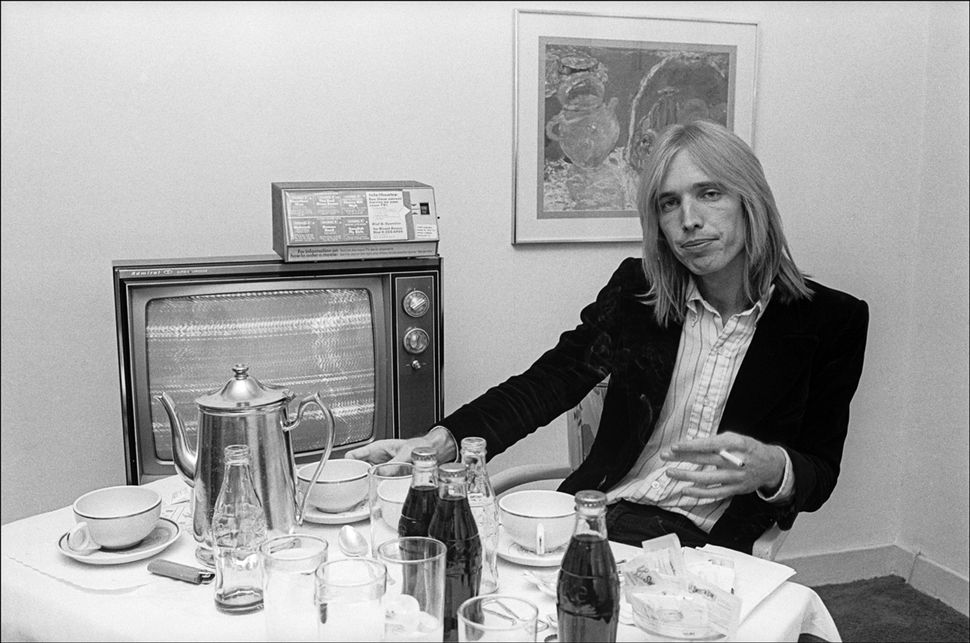 Tom Petty, one of the most popular and beloved singers and songwriters in rock music since the late 1970s, died at UCLA Santa Monica Hospital on Monday, October 2, after suffering cardiac arrest at his home in Malibu. Petty, age 66, had just wrapped up a big tour with his band, the Heartbreakers, which ended just the week before at the Hollywood Bowl. Petty alleged that the tour was his final such outing; in any case, this is now true.

Petty’s death came on the 30th anniversary of his first concert appearances in Israel, when, along with Bob Dylan, he and his band kicked off their Temple in Flames world tour with appearances in Jerusalem and Tel Aviv. Petty’s band at the time included two Jewish members: drummer Stan Lynch – born Stanley Youngerman (although his stepfather, Nathan Lynch, from whom he took his name, was also Jewish) — and bassist Howie Epstein.

During his time in Jerusalem, Petty met up with Israeli rocker Avraham Rosenblum, leader of the Diaspora Yeshiva Band. Rosenblum took Petty and Roger McGuinn — the leader of the 1960s folk-rock group The Byrds, which was a primary and well-acknowledged influence on Petty – on a tour of the Western Wall plaza, explaining the practices there and on the Temple Mount. The visit was filmed by an MTV crew.

Lynch was the Heartbreakers’ original drummer since the Heartbreakers rose on the local music scene in Gainesville, Florida, before moving to Los Angeles. Whenever the band would travel near the end of a year, Lynch reportedly packed a Hannukah menorah and candles, which he lit every night of the holiday. Epstein played (and sometimes sang) with Petty for 20 years, and was with the Heartbreakers when they were inducted in March 2002 to the Rock and Roll Hall of Fame. Epstein died the next year of a heroin overdose, after a long struggle with addiction.

Petty’s longstanding friendship and musical collaborations with Bob Dylan — also an obvious influence on Petty’s music — is the stuff of legend. In 1986, on the American leg of the Temples in Flame tour, Petty and the Heartbreakers backed Dylan singing a rendition of Hank Williams’s “Thank God,” which was filmed and used by Chabad for its annual telethon. Aside from touring together, Petty joined Dylan in the Traveling Wilburys supergroup, alongside George Harrison, Roy Orbison, and Jeff Lynne. The group recorded two albums together, in 1988 and 1990.

Upon hearing the news of Petty’s passing, Dylan issued a statement: “It’s shocking, crushing news. I thought the world of Tom. He was great performer, full of the light, a friend, and I’ll never forget him.”

Petty’s sound has always been a fusion of classic 1960s folk-rock; brawny, Southern rock swagger; and Southern California cool. He could also be politically perceptive and humanly astute. In an interview in Rolling Stone two years ago, Petty looked back on the 1985 tour promoting his concept album, “Southern Accents,” which featured a huge Confederate flag draped across the stage.

“The Confederate flag became part of the marketing for the tour,” said Petty. “I wish I had given it more thought. It was a downright stupid thing to do… People just need to think about how it looks to a black person. It’s just awful. It’s like how a swastika looks to a Jewish person.”

While the song “Refugee,” one of Petty’s earliest and most enduring hits, is ostensibly addressed to a woman, the lyrics could be read in another way, especially in an era when immigration is at the forefront of the news and on many people’s minds:

“We got somethin’, we both know, we don’t talk too much about it
Ain’t no real big secret, all the same, somehow we get around it
Listen, it don’t really matter to me, baby
You believe what you want to believe, you see
You don’t have to live like a refugee.”

Unfortunately, in the age of Donald Trump, many do.

Seth Rogovoy is a contributing editor at the Forward who writes frequently about the intersection between popular culture and Jewish themes.