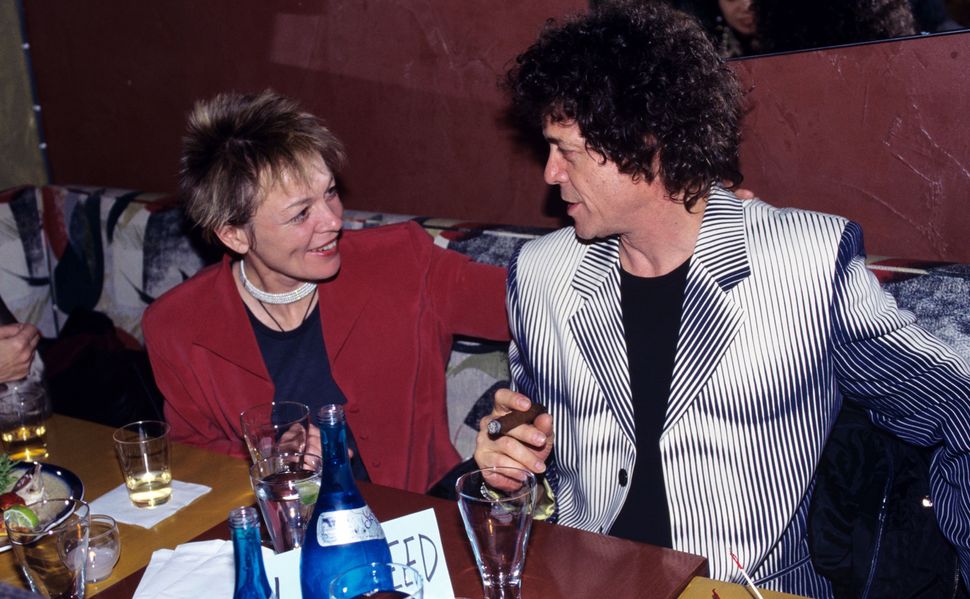 At first glance, Lewis Allan Reed wasn’t all that different from the other middle-class Jewish lads he grew up with in 1950s Freeport, New York. He was a diligent student and an avid tennis player; he liked to make weekend forays to Jones Beach with his friends, and could often be spotted making out with girls in the balcony of the local movie palace.

But according to “Lou Reed: A Life,” a new biography by Anthony DeCurtis, the few friends who actually knew him well saw a much different side to the future rock star. Young Lou had a rebellious streak as wide as the Long Island Expressway, and he pushed back against the stifling conformity of suburban existence by playing rock ’n roll, smoking weed, writing gritty poetry, and exploring his sexual identity in a far more fluid way than was generally considered acceptable during the Eisenhower era.

In DeCurtis’s book, Reed’s friend Richard Sigal recalls that “Lou had a secret life”: Not only was he the lone kid in their high school crowd who actually knew where to buy marijuana, but he would also occasionally perform music at the Hay Loft, a gay and lesbian bar near Hofstra College. “Lou said that sometimes the patrons there would grab his ass or crotch,” Sigal remembers in the book, “I was pretty naïve at the time and it never occurred to me that he might have enjoyed it or encouraged it.”

Lou Reed, in other words, was pretty much always Lou Reed. While he would evolve through many musical and personal incarnations until his death from liver disease in 2013, the basic elements of Reed’s songs — boundary-pushing; poetic meditations on sex, drugs and rock ’n’ roll — essentially remained the same throughout his work with the Velvet Underground and as a solo artist. The 1972 song “Walk on the Wild Side,” Reed’s biggest and best-known hit, was merely the most tuneful of his many streetwise explorations of New York City’s seamy underbelly.

There was also an element of Oedipal rage in much of Reed’s work, such as in the 1974 song “Kill Your Sons,” a harrowing account of the electroshock therapy that he received at the age of 17. While previous Reed biographers have simply parroted Reed’s assertion that his parents were cruelly trying to “cure” him of his bisexual tendencies, DeCurtis takes a broader view, noting that Sidney and Toby Reed genuinely adored their son and were heartbroken over his severe depression and mood swings — issues for which such brutal treatments were commonly prescribed in those days. At the same time, DeCurtis acknowledges that Reed’s unconventional sexuality would certainly have been factored into the decision. “For parents like Sidney and Toby,” he writes, “for whom middle-class respectability was a paramount concern, the possibility of their son being homosexual would have been deeply disturbing.”

DeCurtis takes a similarly even-handed approach throughout “Lou Reed: A Life,” putting Reed’s addictions — “Heroin” was one of his best-known songs, but booze and speed were much more to his liking — his relationships, and his sexual adventures in a broader context while also offering up numerous little-known tidbits about the man.

A contributing editor at Rolling Stone, DeCurtis knew Reed well, and appears to have had — unusually, since Reed was notorious for his hatred of journalists — a very pleasant relationship with him. But while DeCurtis shows us a Reed who was tenderly romantic, hilariously funny and deeply (in Reed’s words) “susceptible to beauty,” he also doesn’t shy away from detailing the more unpleasant sides of Reed’s personality, such as his tendency to blame his record companies for the poor sales of his most resolutely uncommercial work, and his constant downplaying (or even outright dismissal) of the considerable contributions made to his work by collaborators like John Cale, David Bowie, Mick Ronson and Robert Quine.

DeCurtis rarely tries to make excuses for his subject’s bad behavior, though he does practically contort himself into a pretzel while attempting to explain one particularly ugly incident where Reed — irate because he had to wait in line at an ATM on a cold New York City afternoon — focused his rage on a homeless man sleeping in the bank vestibule, and demanded that the branch’s security remove him immediately. “Most artists would have been too savvy and image-conscious to behave as he had in public,” DeCurtis writes. “It’s another example of Reed’s inability or unwillingness to play by anyone else’s rules.” Or, just maybe, it’s another example of Reed acting like an utter jerk.

As a straightforward biography, “Lou Reed: A Life” is easily the richest and most nuanced depiction of Reed ever written. Where the book falls short, unfortunately, is on the musical side of the equation. For all of Reed’s iconic status, his extensive solo output was inconsistent at best; either by design or because his ego or substance abuse got in the way, his artistic or commercial triumphs of the 1970s and ’80s were almost invariably followed by unfocused and uninspired material (as in 1978 with “The Bells”), or experiments calculated to puzzle fans and critics alike (a la the 1975 all-instrumental “Metal Machine Music”). DeCurtis generally spends three or four pages on each album, discussing the basic circumstances of its recording, its highlights and its reception, but he rarely offers anything in the way of new insights about the music. He also devotes only two pages or so to Reed’s extensive (and quite fascinating) pre-Velvets work as a songwriter and recording artist for the budget label Pickwick Records, and completely ignores the 1965 “The Surfsiders Sing the Beach Boys Song Book,” the so-bad-it’s-amazing cult LP that’s long been rumored to feature Reed on uncredited lead vocals.

There’s also disappointingly little in the book about Reed’s interaction with (or opinion of) the 1970s punk or 1980s indie-rock movements, both of which were heavily inspired by Reed’s work, image and attitude. While DeCurtis does touch upon R.E.M.’s recording of the Velvets’ “There She Goes” for the B-side of its 1983 single “Radio Free Europe,” there’s no mention at all of the Feelies, the Jesus and Mary Chain, Galaxie 500, Spacemen 3 — to name just of few of the dozens of other bands that carried the Velvets’ legacy into the ’80s.

DeCurtis does excel, however, at illustrating Reed’s deep and enduring connection with New York City, his home and muse for most of his adult life. As complex (and often as maddening) as the city that inspired him, Reed was as intrinsically New York as an egg cream, a folded pizza slice, or a nickel bag of oregano sold to a clueless tourist in Washington Square. And since “Lou Reed: A Life” is filled with so many references to New York City’s neighborhoods, clubs and restaurants that he loved and frequented, the city essentially becomes a supporting character in the drama of his life. Whether you’re a lifelong New Yorker or someone who has just admired the rhythm and romance of the Big Apple from afar, reading “Lou Reed: A Life” will make you feel intensely nostalgic for the gritty, pre-Giuliani NYC that spawned so much of Reed’s most important music — and understand that the loss of Reed was as heavy a blow to the city as the loss of any of its landmarks. “An artist of incalculable significance,” DeCurtis writes, “Lou was also, as one of his song titles put it, the ultimate ‘NYC Man,’ as inextricable a part of the city as, say, the Twin Towers. Now he and they are gone and the city still stands, however diminished.” It’s hard to disagree.

Dan Epstein is the author of “Stars and Strikes: Baseball and America in the Bicentennial Summer of 1976.”