Why Do We Obsess About Bar Mitzvah Torah Readings — When There’s Little Textual Basis For Them? 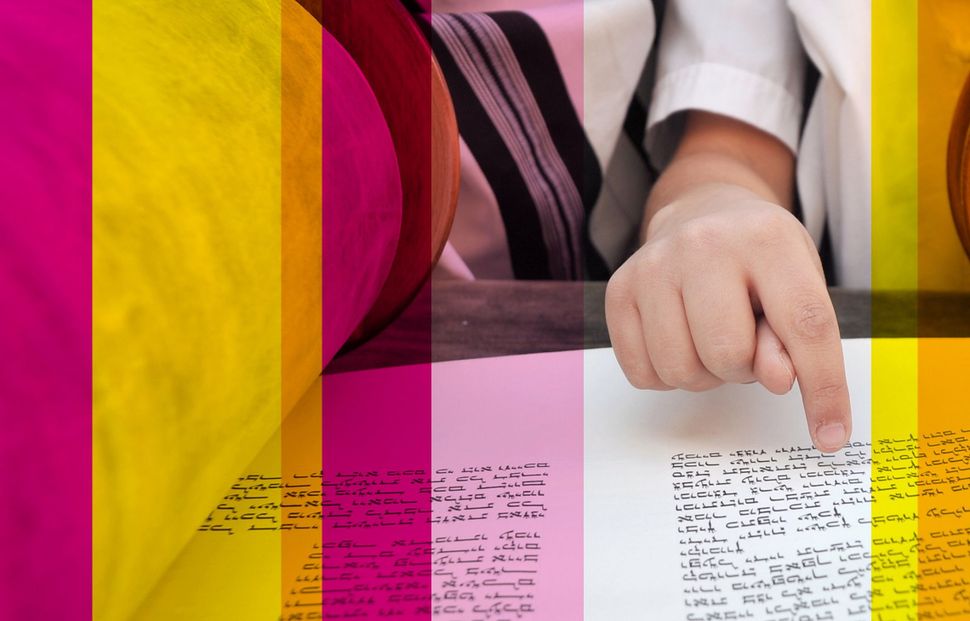 This is part 1 in a series of articles examining the Bar and Bat Mitzvah ritual in America.

Few institutions represent the American Jewish community like the bar and bat mitzvah. It would be surprising, given this cultural emphasis, if this ritual turned out to be almost as modern as the elaborate parties that surround it. And yet, this is the case. Ironically, this most iconic ritual has very little basis in Jewish texts. Many articles have been written about the vanity and expenses of the bar mitzvah party. But what about the ritual itself?

Interestingly, there is not one word in the Torah that mentions the bar mitzvah. Even in the Mishna and Talmud, there is absolutely no discussion of the actual ceremony — in stark contrast to the wedding ceremony or even Pidyon Haben for the first born male son, both of which have lengthy discussions in the Talmud devoted to their execution.

Not so when it comes to bar mitzvah celebrations. Instead of guidelines for the occasion, we have timelines for the responsibilities of becoming a young Jewish adult, and for how to prepare for these responsibilities. For example, an early mention of the bar mitzvah occurs in the “Ethics of Our Fathers,” in which Yehudah ben Teima gives a timeline of Jewish education, and says that a young man must begin observing the commandments at 13. Or take the Talmud in Yoma, which discusses how one should start practicing fasting in advance of becoming an adult. The Talmud in Niddah tells us the first mitzvah a child must observe is to keep vows a year before becoming of age, the greatest preparation for adulthood being the understanding that words are powerful and absolutely binding.

But none of these mentions the occasion of becoming a bar mitzvah (literally, a son of mitzvahs). Indeed, so hidden is any mention of a ceremony that the 16th-century rabbi of Lublin, Shlomo Luria, went looking for discussion of the bar mitzvah in his magnum opus “The Sea of Solomon.” All he could find was a talmudic discussion about Rav Yosef, who was blind. Rav Yosef said that if he found out blind people were obligated to keep the mitzvot, he would make a yama tava lerabanan, a “great celebration for the rabbis.” From here we learn that the day one becomes obligated to keep the commandments, one ought to celebrate.

And that’s it — the only mention of America’s most popular Jewish party in over 2,700 pages of Talmud.

Yet today, despite the scant textual pretext, the bar mitzvah ceremony has become the center of the entire curriculum of many Hebrew schools. Since we insist that the children read from the Torah, they have to learn the cantillations, and they have to have a strong background in Hebrew language. Some synagogues have 20-page bar/bat mitzvah handbooks, with deadlines for payment and fees; a timeline of tutoring, rehearsals and mandatory meetings; not to mention an opportunity for sponsoring the flowers on the bimah.

Just as there’s little textual backing for the ceremony, there’s none at all for reading from the Torah. As a pulpit rabbi, I have the privilege of guiding many children toward their bar and bat mitzvahs, and I see far too many parents placing a disproportionate emphasis on chanting the Torah reading. I see parents get frustrated at their children for not studying the melody and cantillation marks seriously.

I don’t want to undermine the great tradition of reading from the Torah and the sense of pride it can give a child. But what happens to the kids who are not musical? Or those who are just not good with languages, especially when taught in an after-school setting, when they are exhausted? What happens when the Judaism they are presented with is predicated on skills they may not have?

In fact, in very religious circles, many avoid having the bar mitzvah boy read the Torah, feeling it is a lose-lose situation: If the boy misreads the portion, the community will have not heard a proper reading, plus it will have to publicly correct a terrified 13-year old. If he does prepare well in advance, the concern is he will read from his memory, which is also problematic according to the laws of Torah reading (it is not reading, but reciting by heart). Therefore, many choose to have their children chant only haftarah, the weekly prophetic portion, while some will opt out and choose to have their children not read at all.

Not so in more moderate circles. I once suggested to the parents of a bar mitzvah that perhaps the boy read only the last few verses of the reading known as the Maftir. The boy’s father looked at me as though I had suggested his son read the Quran in a Lutheran church. “Rabbi, you can’t be serious, right?” he demanded. “My dad made me do the whole parsha, and so will my son!”

Contrast this with my classmate Nati, whose bar mitzvah struck me as particularly enviable — and particularly meaningful. The year after my bar mitzvah, I started studying at the flagship Haredi Ponevezh Yeshiva high school in Bnei Brak. There I met Nati, who came from an illustrious Haredi family; his father had written a Torah commentary that you can find in almost every beit midrash, or Jewish study hall, around the world. When I asked Nati, a smart, gentle student, what he and his family were doing for his bar mitzvah, he told me, simply, later that night, after the afternoon study session, he would go home for a small family dinner, at which he would share some thoughts he had prepared on the Torah. That was it.

Too often, a bar mitzvah becomes an end goal, a checklist item, for a family. Once the party is over, the child won’t return to synagogue for years. When a bar mitzvah student doesn’t come back after he’s done, it’s like a groom and bride going their separate ways after the wedding is over.

When we speak of students for whom bar mitzvah preparation is their only formal Jewish education, it breaks my heart to see, in the broader community, children memorizing a lengthy Torah portion, painstakingly studying the melodies, while they remain totally ignorant of the very basics of Judaism. Too many American bar mitzvah students cannot answer simple questions about our tradition: Who is Sarah? Who is Joseph? Who is Maimonides? What did King Solomon build? What is the meaning of the Shema prayer?

Don’t get me wrong — I am not one for replacing a Torah reading with a “mitzvah project” or a speech alone. A bar or bat mitzvah experience must be built around deep study of the Torah, and positive Jewish experiences. And as for the child who is up to reading it — that’s great. There’s great value in the ability to stand before one’s community and lead the service or reading.

But the question we need to ask is not how well did the bar or bat mitzvah read. Instead, it should be how much do you love Judaism. How many mitzvot do you connect to and think you could implement in your daily life? When is the next time you will want to come back to synagogue? And most important, what are the memories you will take with you for life? Will there be pride? Attachment? Curiosity to open a page of the Talmud? Will that inspire you to be involved in a community and become a member? Will you want to start your day with Modeh Ani and finish it with the Shema?

In other words, instead of focusing on how well the child can read from the Torah, we should be focusing on teaching the child to learn it, to love it, and then to live it.

And perhaps then, if we focus first on teaching our children the very foundations of Judaism and Jewish history, rather than torturing them with the study of a foreign language and melody, maybe then they’ll come back to synagogue after the bar mitzvah, too.

To all those children who can’t get the melody right, or struggle with languages, I tell them we have enough good chanters; we just need more good Jews.

Why Do We Obsess About Bar Mitzvah Torah Readings — When There’s Little Textual Basis For Them?