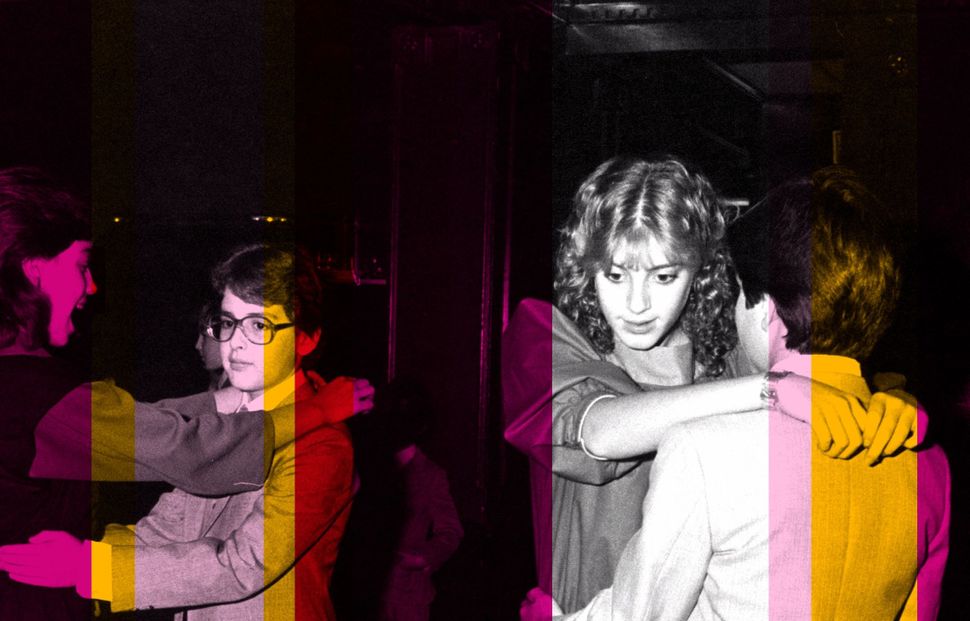 This is the fifth in a series of essays examining Bar and Bat Mitzvahs in America.

On March 25, 1978, the day after my bat mitzvah, I announced to my parents that I was done with Judaism and would never again set foot in a synagogue. Some of my disgust with Hebrew school was no doubt specific to my situation. Two years before I started, we’d moved from a working-class neighborhood in Philadelphia to the edge of a tony Western suburb. Our house was a tiny fixer-upper, but the location qualified me for top-notch public schools. My parents, struggling to make ends meet, couldn’t pay the exorbitant prices for synagogue membership in our new community. Jewish education, like everything else when I was growing up, was inextricably tied to money and class, and that set me up to hate it from the start.

My parents found a small synagogue in another community that had special pricing to attract young families, so I ended up in Hebrew school away from my (still relatively new) friends. Our teachers were generally underpaid and uninspiring. We copied letters and vowels, and eventually words and sentences, off the board, and read aloud passages from the siddur. There was one teacher, an Israeli, who was passionate about Jewish history. He took no baloney and made us actually speak the language we were trying to learn. He gave me a glimmer of what the experience could be — but after seven hours of public school, no one could give him his or her best energy. We were so tired of sitting that even afternoon services felt like a relief. We at least got to stand up and sit down and stand up again.

To add to my confusion, throughout my time in Hebrew school, the Conservative movement was engaged in a doctrinal tug of war — one of many — over women’s participation. Our rabbi, who was generally feared and disliked, would not even consider allowing girls to read from the Torah. From the moment I started learning my haftara, I felt resentful that boys — some of whom spent their five years telling dirty jokes in the back row — got the real deal on Saturday morning, with the parchment and the parade, while I got the prophets and a pat on the head. Still, my parents were proud I’d learned to read Hebrew. They made a catered Friday night dinner at the synagogue for our family and friends, which I enjoyed. Nobody at this synagogue went bananas on the party, which is a point in its favor.

Meanwhile, every weekend I was off to the Saturday morning bar and bar mitzvahs of my wealthier school friends in the suburbs. Afterward there would be a lavish Kiddush or sit-down lunch, then we’d return in the evening for piñatas filled with candy, ice skating parties and endless record hops with ice cream sundae bars. Sometimes there was also a black-tie dinner with an open bar and kosher prime rib. To me, none of this felt very connected to religion or spirituality. Mostly we girls agonized over our clothes, our hair and whether a particular boy would ask us to slow dance. To quote my mother, it was a lot of bar, but not much mitzvah.

I get it — we Jews have been systematically excluded everywhere we’ve lived (including, for many decades, here in America), and the bar and bat mitzvah, in many communities, are a way of stating that we’ve finally arrived. But I wish the statement didn’t involve a 10-piece orchestra playing the theme from “Star Wars” while the bar mitzvah boy was dropped from the ceiling.

I’m happy to report that I did not fulfill my bratty promise to leave Judaism forever. I look back on all the sacrifices my parents made for me, including paying for Hebrew school and making me a bat mitzvah, and I’m filled with awe. I’m glad I learned to read Hebrew, but I still wish the process could have been less of a miserable chore. In the end, I had to go out and find what Judaism could offer me outside the institutional settings of my childhood.

My first step in that direction was an encounter with an Orthodox rebbetzin from a black hat yeshiva community near where I grew up. Home from college, I sat next to her on a bus one day and she invited me for Shabbat. I loved it and went back many times. Nobody cared what you had or what your outfit cost. Strangers were invited and fed. Shabbat was joyful, song-filled; there was no television or other distractions. Yes, it was the 1980s, and communities were less rigid. I was even allowed to visit a few homes while wearing pants. All summer, I studied with that rebbetzin. She encouraged me to ask her all kinds of hard and even disrespectful questions, and she answered them. Sometimes her husband, a rosh yeshiva, or leader of a talmudic academy, from a famous rabbinical dynasty, joined our discussions. I think he found my pushback entertaining.

No, I didn’t become ultra-Orthodox. Anyone who cares about women’s participation is not going to disappear into such a community — but there is still plenty to be learned from one. Nobody drops off the kids at synagogue and speeds off to go shopping, or teaches them about laws and traditions that are never used at home. Any Jew is welcome to walk into services, including on High Holidays. Nobody goes without a place for Shabbat. And kids aren’t studying or praying to reach a finish line, let alone a party with a buffet, a DJ and a bag filled with personal checks.

Sharon Pomerantz wrote her first novel, “Rich Boy” (Twelve) in 2011, and won the National Jewish Book Award for Debut Fiction. She lives in Chicago and is at work on her second book.