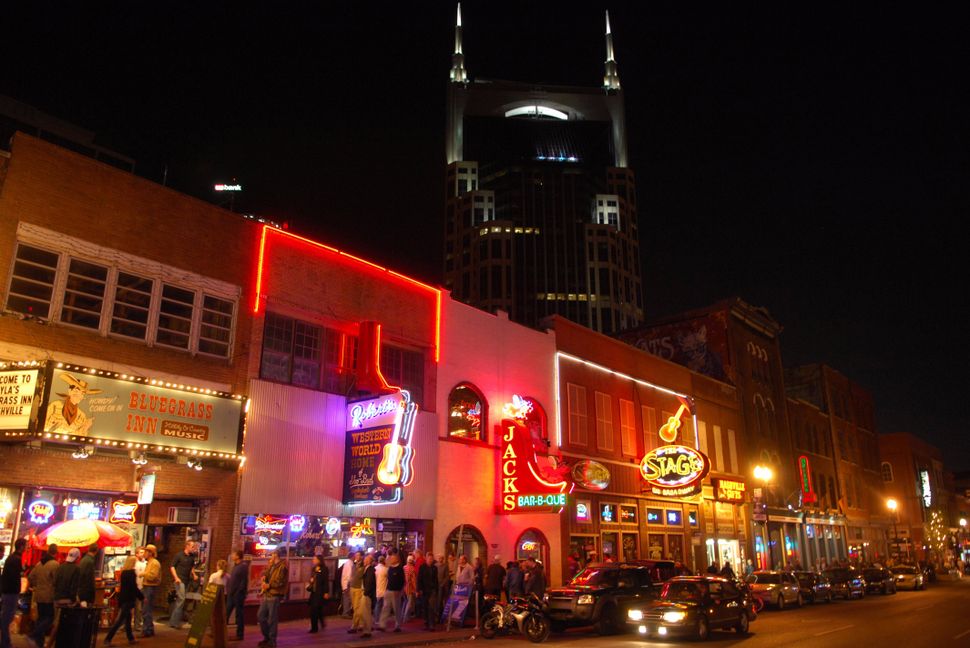 If Adam Sandler’s “The Hanukkah Song” were rewritten with a twang and a steel guitar, it would name check the following artists: Si Siman, Barbi Benton, Nudie Cohn, Bob Dylan, Paul Cohen, Ray Benson, Kinky Friedman (that one might be in the chorus; he comes up a lot).

As Sandler would have said, “They’re Jewish, too.” In fact, in every decade since country music came into its own in Nashville, Tennessee, more than 90 years ago, Jews have influenced the Music City sound.

Of course, Jews are not what comes to mind when country music comes up. Rather, it’s trucks and Buds and Christmas albums.

Let’s face it, Nashville’s image is more about bacon and biscuits than bagels and brisket. Certainly, other than Dylan — a man of many genres with deep Nashville roots — and Friedman, who is a Texan, not a Tennessean, the names of Jewish country are tough to come up with. Friedman claims to be the first “full-blooded Jew” to take the stage of the Grand Ole Opry.

Still, the influence of Jews on the Nashville music scene, both past and present, is there; in fact, it stares audiences in the face almost every time a music star takes the stage.

We’re talking now about the signature look of a country star — the rhinestones from hat to boots. Those singers wouldn’t shine onstage but for Nudie Cohn, a Jewish immigrant from Ukraine (born: Nuta Kotlyarenko).

Cohn converted to Christianity in the 1960s. But his roots as an immigrant and a Jew were threaded through his work and the legacy of “Nudie suit,” which still informs the country music aesthetic. As bars on the city’s legendary Broadway have become more diverse (you’re now as likely to hear rock as you are country music), and more like Bourbon Street than Music Row, Miller feels that the existence of Nudie’s Honky Tonk, with its photos and Nudie suits behind glass, and even one of Cohn’s signature Cadillac El Dorados suspended from a wall, helps connect the city and tourists to its past, and to Cohn’s story.

“It was a genre that never had a lot of Jewish people. It was not a natural fit back in those days,” Miller told me. “But he defied all the odds. He was short in stature, but a giant among men.” Miller cited Cohn’s industriousness, creativity and immigrant roots as part of what made him a legend that still defines how people see Nashville today.

Musicians who have been in this city and its music industry for decades agree with Miller’s characterization of the Nashville of yore — “not a natural fit” when it came to Jews.

Session musicians — that special musical breed, able to play a variety of styles and genres, and often many instruments — have an especially long institutional memory of the town.

Eric Silver plays guitar, mandolin, violin, banjo, bass and piano, and has done so with some of country’s biggest names, including Keith Urban, the Dixie Chicks and Shania Twain. He grew up Jewish in North Carolina, and moved to Nashville in 1981 to pursue his musical dreams. While he couldn’t have articulated this 30 years ago, today he has said, “I was almost afraid that people would think I really did not belong here.”

“Now country [music] is everything,” he said — an amalgam of some pop, some rock, some Americana, some bluegrass.

“In that era, it wasn’t,” Silver said. He recalled that his own style was more pop than traditional country: “People would say, ‘Why don’t you move to L.A.? You’d fit in there.’”

Silver never hid his Judaism, but he didn’t announce it, either. It was a don’t-ask-don’t-tell approach repeated by other longtime Nashville musicians interviewed for this article. Yet the Jewish experience, Silver said, was an important part of his background. His great-great-grandfather was a well-known rabbi; much of his mother’s family perished in the Holocaust. Today his brother works in a synagogue, teaching bar mitzvah students.

For a while, Silver was hesitant to talk about being Jewish or to make his faith known, “just because it seemed so odd to people.”

Silver cites jazz and bluegrass mandolinist (and fellow Jew) David Grisman, in whose band he played, as one of his creative inspirations. While Grisman’s music has no direct connection to Jewishness, Silver said, you can hear it in modal and minor themes. “I don’t know that you can get away from any influences you’ve had in your life,” he said.

Silver now splits his time between Nashville and Brazil, and the perspective of both locales is obvious in his current work. He won a Grammy for the best Brazilian roots music album of 2016.

“To me, this is a folk album,” he said of the record’s traditions. “There are about 10 degrees of separation between that and my influence, but I don’t know that you can ever get away from your influences.”

For others, the Jewish experience comes through in the lyrics. No, you’re not going to hear “L’cha Dodi” sampled in a song by the band Florida Georgia Line. But Cliff Goldmacher, who now lives in Northern California though he still works and records in Nashville, sees a connection between his Jewish background and his own work from “The Great American Songbook,” that collection of popular songs from the 1920s to the 1950s.

George and Ira Gershwin, he noted, were influenced by traditional Yiddish tunes to create their canon; those songs then influenced Goldmacher. “It is not a direct line from the Yiddish, but goes to the Gershwins, to my level of connections, to connections of connections and beyond,” he said.

Silver has seen the occasional fiddle player or klezmer music fan incorporate those sounds into contemporary country and Americana, too.

He’s not alone. Paul Burch, a songwriter, musician and creator of “Meridian Rising,” an imagined musical autobiography of country music pioneer Jimmie Rodgers, said, “I know [a Jewish influence] works into my lyrics sometimes, mostly because those kinds of phrases are so old and so established.”

Asked for an example, he said: “There’s a song on one of my records where each line begins, ‘Why is this love unlike any other?’ I wasn’t thinking of carrying on a Jewish tradition by writing that. But those are the kinds of things that are in my head because they’re very renewing kinds of phrases. You hear them every year, even if you’re not very observant (which I’m typically not).”

In his music, Burch strives for lyrics that are like a book you reread as you age, rather than just a summer snow cone, with its fleeting satisfaction.

“You have to be really f—king smart to [decide], ‘I’m going to write something and it might take 20 times, but on that 20th time someone is going to realize that I’m doing something a little different than someone else,’” he said. “That’s the whole altruistic trip. That’s the difference between pop music and music that’s going to stay around for a long time: the idea is that pop is going to be enjoyed on a very sort of surface level or sort of remedial level. The music that really hits you is going to hit you first emotionally, and then you’ll think about it more and think about it more. I love that. Most of the music I like I’m still hearing it differently than I did when I was a kid.”

In striving for this goal, Burch said, the chestnut about Judaism encouraging its flock to ask questions is at the root of the lyricist’s quest. “Why?” he believes, is the essential question for both a songwriter and a Jew.

Margaret Littman is a writer and editor in Music City.