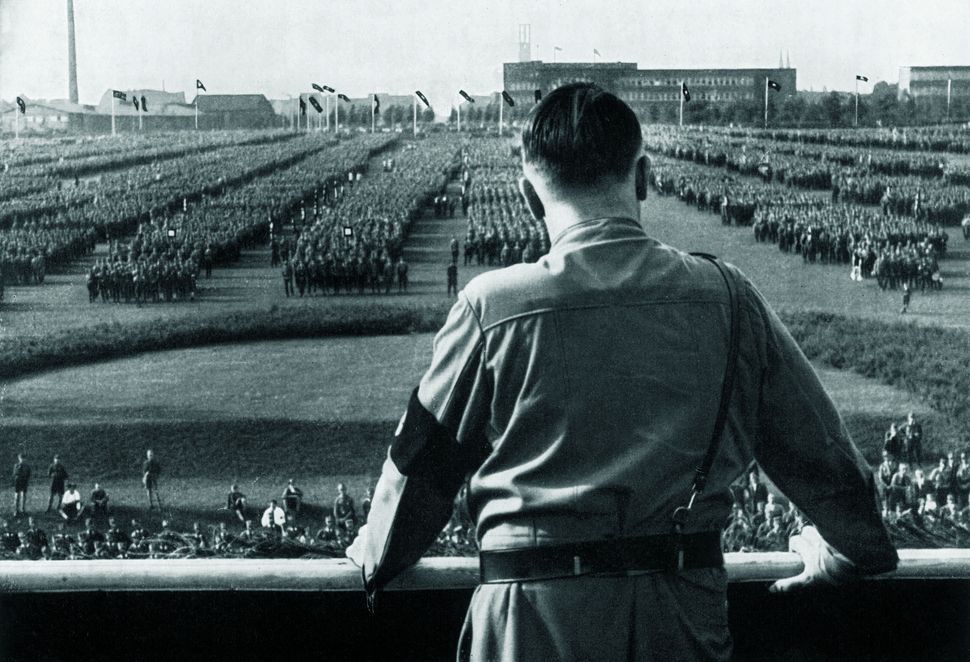 Becoming Hitler: The Making of a Nazi
By Tom Weber
Basic Books, 464 pages, $35

Today, historians are in the unfortunate position of having to describe new books on the Nazi era as “timely.” This description is especially apt for Tom Weber’s new book, “Becoming Hitler.” Had it appeared prior to Donald Trump’s election in 2016, it would have been deservedly praised as a well-researched and insightful examination of Adolf Hitler’s political awakening in the early 1920s. But the book has special resonance coming out during the administration of a president who can be described as “soft” on the Nazis.

For many readers, Weber’s perspective will be jarring, for he emphasizes the contingency of Hitler’s evolution from an apolitical slacker to a political fanatic. We are accustomed to thinking of Nazism as an uncompromising ideology and Hitler as its most ardent exponent. Yet Weber reminds us that Hitler did not arrive with his ideas fully formed. He required several years’ worth of new acquaintances and experiences to make him who he ultimately became. The nature of those circumstances are of profound significance for anyone seeking to understand how certain present-day leaders arrived at their ideas and found masses of people willing to support them.

“Becoming Hitler” builds on the narrative advanced in Weber’s 2010 book, “Hitler’s First War,” on Hitler’s experiences during World War I, and moves on to examine his development from 1919 to 1926 after he returned to Munich. Weber devotes considerable attention to the long-standing debate among scholars about the extent to which the Bavarian capital’s volatile political climate impacted Hitler and whether or not it bears a disproportionate amount of the blame for his ensuing radicalization.

Weber makes clear that when Hitler first returned to Munich he was hardly a right-wing zealot. If anything, he leaned to the political left. After the war’s end, Hitler did not follow other right-wing extremists and join the Freikorps, the rabidly anti-Bolshevik paramilitary bands that fought in irregular combat after the war’s conclusion. He continued to serve in his army regiment, despite the fact that by November 1918 it was part of a new revolutionary government led by the independent socialist Jewish journalist and politician Kurt Eisner. Hitler’s tacit support for Bavaria’s left-wing political order lasted through the weeks of the even more radical communist Soviet Republic of April 1919, when he was elected to be his demobilization company’s political representative. Hitler, later a sworn anti-Bolshevik, thus technically served in the Red Army!

According to Weber, the period of May-July 1919 was pivotal. After the Freikorps suppressed the Munich Soviet Republic in early May, Hitler found himself in danger of being branded a former leftist collaborator. As a result, he opportunistically shifted right and volunteered to serve the army once more by informing on his peers. Equally important for Hitler’s rightward shift were the proclamation and subsequent German socialist government’s ratification of the Treaty of Versailles. Most decisive perhaps was Hitler’s experience in taking an army-sponsored training course at the University of Munich for detecting and refuting left-wing propaganda. For an ex-soldier with little education, fewer job prospects and no family, the course gave him a sense of direction and enabled him to discover his oratorical powers of persuasion.

These events brought Hitler into contact with a tiny political party that he was instructed to report on for the army, the German Workers Party, known under the acronym DAP. After attending a meeting of the party, and impressively shouting down a Bavarian separatist, Hitler was brought into the party’s inner circle by its leader, Anton Drexler, and became exposed to its radical ideas.

From this point in time, according to Weber, Hitler’s anti-Semitism began to take more shape, and Hitler came to embrace the view of the DAP’s in-house economist, Gottfried Feder, that a “Golden International” representing Anglo-American Jewish finance capital was working with the World Communist Movement to destroy and take over the states of the Western World.

Weber emphasizes, however, that Hitler at this time was still “an incomplete Nazi” and that he was still quite open to other outside influences. Besides the economic ideas of Feder, he absorbed the “metaphorical” anti-Semitism of Dietrich Eckart and Houston Stewart Chamberlain, both of whom saw the Jewish “spirit” (as opposed to the Jewish people or “race”) as an existential threat to German civilization.

Here, Weber asks readers to consider whether Hitler’s anti-Semitic invective was metaphorical or was meant to be literal, suggesting that his Jew hatred was originally a tactic to gain attention in a crowded Munich political scene. It may seem heretical to suggest that Hitler’s anti-Semitism was calculated, but Weber argues that even if it originated in semi-opportunistic fashion, it acquired its own deadly reality in his mind.

When Hitler returned to Munich, he was hardly a right-wing zealot.

embrace of German military expansion to the east came relatively late. Thanks to the influence of reactionary, anti-Bolshevik Baltic German exiles in Munich, Hitler initially believed that Germany could forge an alliance with Russia after the Bolshevik regime was toppled. The fact that the regime failed to collapse after Vladimir Lenin’s death in early 1924, however, convinced Hitler that such an alliance was impossible. Only at this point, Weber notes, did Hitler explicitly add racist components to his political platform. What we typically view as the cause of Hitler’s aggression — namely, racism — is here turned into an ex post facto justification.

“Becoming Hitler” is extremely thought provoking, though it occasionally overreaches. Weber makes too much of the fact that Hitler’s toleration of his onetime aide and chauffeur, Emil Maurice (who was one-eighth Jewish), somehow shows that Hitler’s early anti-Semitism was rooted in nonracial considerations. He also exaggerates when he describes a series of 1923 articles written by a right-wing army officer, Hans Tröbst, recommending that German policies toward the Jews should follow the example of the Turks’ genocidal persecution of the Armenians as having the “utmost importance” in forming the “genesis of the Holocaust.” Still, these and other minor missteps do not detract from the persuasiveness of the book’s larger argument. In fact, “Becoming Hitler” offers timely lessons, the first and most obvious is to underscore the striking parallels in political psychology between Hitler and Donald Trump. Weber’s description of how Hitler evolved into a narcissistic, self-proclaimed “genius” who exploited his “outsider” status bears more than a casual resemblance to the self-perception of our current president.

It remains unclear whether the latter is as serious about ideas as the former. But there are lessons to be had here as well. For by showing us that Nazism required a period of gestation before it could emerge in full, “Becoming Hitler” forces us to consider whether an analogous ideology – call it Trumpism – is in the process of gestation as well. Just as multiple competing ideas vied with one another to emerge as Nazism, the ideas of Trump’s radical “alt-right” base are equally in flux.

Weber’s emphasis on the contingency of Nazism’s rise, in the end, reminds us that everything might have turned out differently. Weber entertains counterfactual scenarios in which Hitler’s rise might have been halted early on, whether in the unrealized plan of Social Democratic Party leaders in 1923 to expel Hitler from Bavaria or the accidental fact that car trouble prevented Hitler from escaping back to Austria after the failure of the Beer Hall Putsch in 1923 — an escape that, had it been successful, would have kept him from being tried for treason, gaining a public stage for spreading his political views and reviving his political career.

These facts should remind us that Hitler was not inevitable. It should also remind us that no amount of vigilance is superfluous in the effort to safeguard liberal democratic norms from external assault.

Gavriel Rosenfeld is a professor of history at Fairfield University. He is the editor of the recently published volume, “What Ifs of Jewish History: From Abraham to Zionism” (Cambridge University Press, 2016).