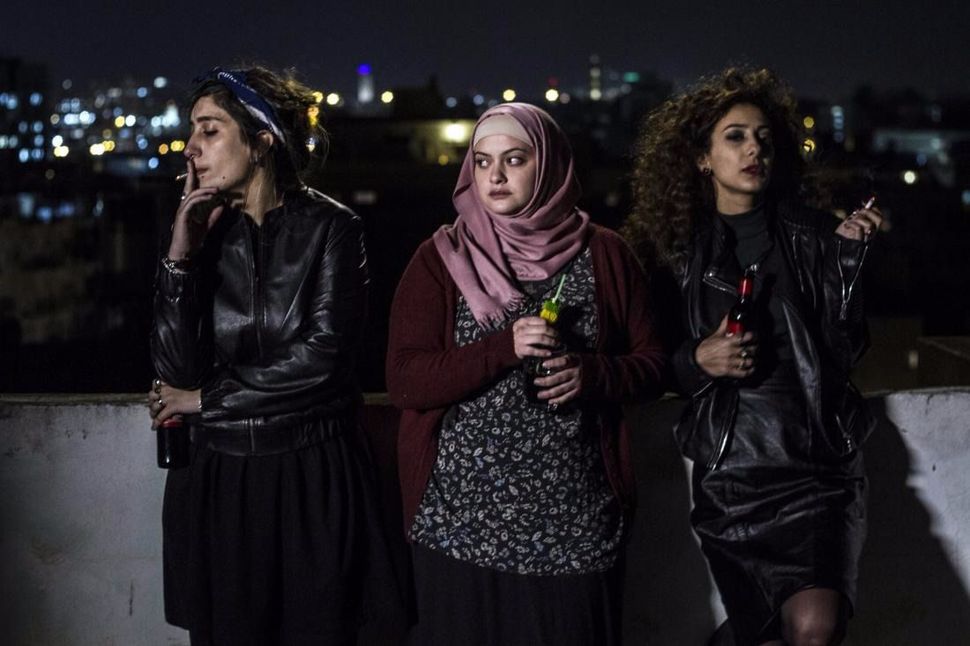 Enjoying its American premiere at this year’s Other Israel Film Center Festival, an annual festival dedicated to films about the Israeli underground, “Bar Bahar” (meaning ‘in between’ in English), directed by Maysaloun Hamoud, is the story of three women living in a newly emerged Palestinian subculture. In an apartment in the center of Tel Aviv, Nour, Laila and Salma all grapple with what it means to be a modern Palestinian woman living in Israel.

Nour is a religious university student with a fiancée who wants her to marry him and move out of the apartment she shares with women he deems impure. Laila is a cosmopolitan, chain smoking, irreligious lawyer. Salma is a lesbian who occasionally visits her parents’ village to meet prospective husbands. Existing in between Israeli and Palestinian society, being feminists in a male dominated culture, while navigating the hypocritical gender politics of Arab men, Nour, Laila and Salma all redefine what it means to be an Israeli Palestinian.

These characters were teenagers during the first Intifada, which affected the way they engaged with Israeli society. The film doesn’t directly engage with politics (except for the opening scene where Laila tells an Israeli shopkeeper to relax, “we don’t bite.”) Instead the film is about women and the cost of freedom.

Each of these characters has, to some degree, left their family’s religious ways. The costs prove to be high. They live on the fringe of society, and their rebellion manifests itself in the form of drugs, partying and casual sex. By the end of the movie, the girls sit on a rooftop together, leaving the party they are throwing downstairs. They are world weary, sophisticated and exhausted, and the night is still young. But their freedom just might have been worth it.

Benefiting from a banging score by composer MG Saad, this film is a compelling addition to the world of international contemporary cinema. Traditional religion may not be for Nour, Laila and Salma, but “Bar Bahar” shows that sisterhood can be a higher power too.

The film will be released in the United States on January 5th.

__Shira Feder is a writer for The Forward. You can email her at feder@forward.com. __