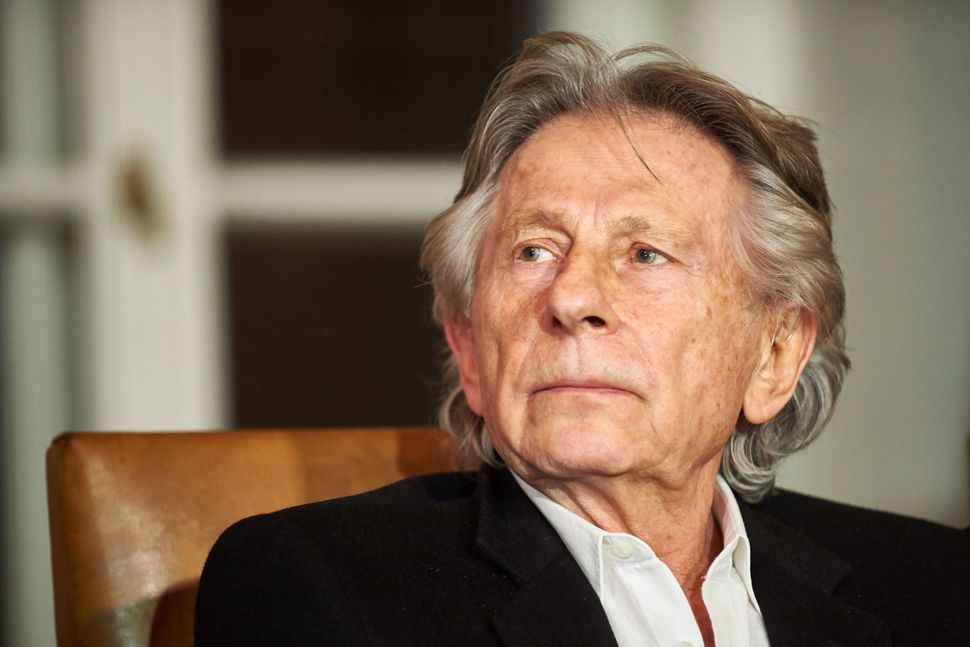 Last Monday evening, two very different groups gathered at Paris’ famed Cinémathèque française. While smartly dressed film directors and actors quickly filed through the front doors, dozens of warmly dressed protestors — along with two largely undressed members of the militant feminist group Femen — milled outside. Many carried signs that riffed on the message, written in franglais, on the bare back of one of the Femen protestors: Very Important Pédocriminel.

That evening’s “very important” person — and the occasion for the competing crowds — was Roman Polanski, the 84-year old French-Polish-Jewish film director. He was the guest of honor at the opening of the Cinémathèque’s long-planned retrospective of his films, ranging from early shorts filmed in Poland during the 1950s to his recently released “D’après une histoire vraie” (Based on a True Story).

The evening’s real story, though, was Polanski’s past as an alleged sexual predator. Since 1974, the director has been the subject of a California arrest warrant for the drugging and raping of thirteen-year old Samantha Geimer. Though he fled the United States that same year, Polanski has been unable to flee the shadow cast by this appalling event. This same shadow hovered earlier this year over the Césars, the French equivalent of the Oscars. The French film academy had invited Polanski to serve as its president—a decision that sent shockwaves through French feminist organizations. In a press release, the prominent group Osez le féminisme reminded the academy that, though forty years had passed, Polanski remained a fugitive from the law. At the same time, the government’s Minister of Women’s Rights, Laurence Rossignol, avowed her “surprise and shock that the story of a rape in a man’s life carried no weight” in the academy’s decision.

Ultimately, Polanski turned down the Academy’s invitation, even while insisting that his critics’ objections were “unjustified.” Welcoming the announcement, Rossignol remarked: “Culture minus the culture of rape is better.” As for Osez le féminisme, its spokesperson declared that while they were happy with Polanski’s decision to decline the invitation, they would have been happier if the invitation had never been made in the first place.

Tellingly, however, Polanski was not alone in finding the criticism unjustified. George Clooney, in Paris to receive an honorary César, confessed that given everything Polanski had been through in his life — referring to, among other things, his childhood experience in the Holocaust and early years in Poland — “it’s awful to imagine they’re still after him.” The prominent intellectual Alain Finkielkraut used the Polanski affair as the occasion to remind benighted Americans that their Puritan origins prevent us from grasping that the French don’t count Geimer, who was thirteen years old at the time of the crime, was not “a little girl or child.” (In fact, while the age of sexual consent in France is 15, there is fine print. As the world recently learned, a 28-year-old Frenchman ducked the charge of rape when the court agreed that his 11-year old victim had, in fact, “consented” to sexual relations.)

Many women also came to Polanski’s defense. Describing herself as “sickened” by the affair, Catherine Deneuve, who first mesmerized audiences in Polanski’s early film “Repulsion,” insisted that the octogenarian had already suffered enough. She also noted that Geimer had herself forgiven him and wondered why others refused to do so. Given the feminist attacks against Polanski, Deneuve sighed: “I am not proud to be a woman.” The Minister of Culture, Audrey Azoulay, waved away the “ancient charges” against Polanski, affirming that Polanski remains “a brilliant director who has already been honored by multiple Césars. This alone explains the Academy’s choice.” Azoulay’s predecessor, the Socialist Aurélie Fillipetti, agreed that Polanski’s past actions have little to do with his artistry. “He is participating in a ceremony tied to the métier of filmmaking, and we should let him preside over it.”

The controversy, which had subsided, has now been reignited by the sordid revelations of Harvey Weinstein’s reign of terror. (Fittingly, when a New York City detective was asked why his office was keeping track of Weinstein’s movements, he replied: “We don’t want another Roman Polanski on our hands.” Over the past several weeks, five more women have publicly accused Polanski of raping or sexually assaulting them when they were still minors — accusations that Polanski categorically denies.

The debate over the Césars proved to be a rehearsal for the new scandal. The newly installed Minister of Equality between Men and Women, Marlène Schiappa, picked up where her predecessor Rossignol left off. By honoring Polanski, Schiappa warned that the Cinémathèque was “contributing to the culture of rape by relativizing sexual aggression according to the celebrity of the perpetrator.” How odd, she observed, that an enlightened society encourages women “to speak freely about sexual aggression and simultaneously rolls out the red carpet for sexual predators” In reprising the roles of her predecessors at the Ministry of Culture, Françoise Nyssen took issue with her cabinet colleague. “It is a question of art, and not a man. I cannot condemn the art.”

The show went on that night at the Cinémathèque — at least once the two Femen protestors, who had entered the building, were led back outside — leaving behind smudged wine glasses and faded placards. It also leaves behind questions that refuse to fade despite the invariably smudged positions they lead to. Most societies wrestle with the dilemma of bad people making great art. In part, this is a dilemma because of crossed categories: while we use moral criteria to judge the actions we take, we employ aesthetic criteria to judge art we make.

But it is also a dilemma because, deep down, we still cling to the notion that what an artist makes with her hands reflects what transpires in her soul. Hence our discomfort when we recall that Richard Wagner, T.S. Eliot and Edgar Dégaswere all virulent anti-Semites. Take Louis-Ferdinand Céline, author of the extraordinary novel Journey to the End of Night. In 2011, when the Ministry of Culture announced plans to commemorate Céline’s work, the merde hit the fan in Paris. Jewish organizations, led by Serge Klarsfeld, denounced the plans, while several Jewish intellectuals, led by Finkielkraut and Bernard Henri-Lévy, defended the commemoration. When the government cancelled the commemoration, dozens of intellectuals decried the decision, slamming it as the airbrushing of history.

In effect, critics have wrestled with the conundrum of serious anti-Semites, from Voltaire to Céline, who are seriously brilliant writers. During the fireworks over Céline, even Klarsfeld acknowledged the greatness of the writer. But by insisting that Céline’s anti-Semitic ravings could not be ignored, he found himself in a distinct minority. More so than Americans, the French tend to insist on a firewall between art and morality. In 1945, a group of French intellectuals and resistance fighters asked that the anti-Semitic and collaborationist writer Robert Brasillach be pardoned from his death sentence, In a draft, they argued that Brasillach loved “the best of all that our French civilization and culture have given…The man capable of the intelligence and the sensitivity that the nonpolitical part of his work reveals could not truly be towards himself a traitor.”

Unmoved, Charles de Gaulle rejected the request and Brasillach was executed. Seventy years later, while the crimes and punishments have changed, the lines of the debate haven’t. Yet it is crucial to note that, in the Polanski Affair, no one is demanding that heads roll, but only that we refrain from rolling out red carpets for individuals whose sexual predations are based on real stories.