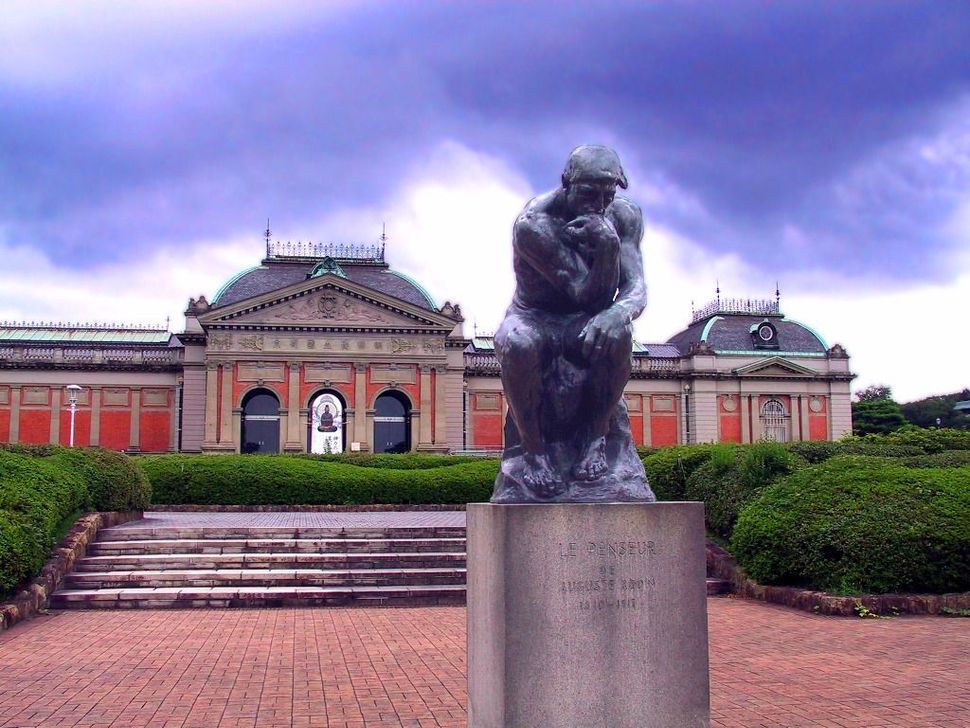 The sculptor Auguste Rodin died one hundred years ago on November 17, 1917. Shortly thereafter, this tribute was published by the Forward’s founder Ab Cahan.

A great man died last Saturday in Paris. He was one of the best artists of all time, and a most remarkable person.

Those things tend to go together — being an artist possessing truly great talent as well as character. What does ‘greatness’ actually mean?

For Auguste Rodin, world famous sculptor who died at the age of seventy-seven, it took many years to achieve art-world recognition.

For years his work was rejected, scorned and disdained. He worked away at it, living in deprivation, ceaselessly approaching the powers that be in the arts with his work — only to find closed doors everywhere. But he wasn’t discouraged nor did he lose enthusiasm for his art, and kept forging his own destiny, despite much ridicule and lack of attention.

In the memoirs of this great individual, two things kept happening:

The first time he brings a figure to the Academy in Paris, where he wanted to study, he’s told it lacks artistry. Fifty years later he’s recognized everywhere as one of the four greatest sculptors the world’s ever produced, including Ancient Greece that placed sculpture above all other arts.

Rodin was born in extreme poverty in 1840 in Paris and spent the rest of his life there. At the age of 14 he attended a drawing school. After several years there, he created a figure based on a friend. He showed it to one of the professors from the Art Academy and again, some time later showed them another figure he’d made. Both times he was told he had no talent and was rejected. The third time — he was similarly rejected.

He lived in the poorest neighborhoods befriending the down-and-out. never ceasing working on his sculptures. Wherever a sculpture exhibition took place — he lugged his work over there. And everywhere it was returned to him. He tried selling his figures and there were no buyers to be found.

Finally, an acclaimed painter and sculptor saw his work, noted his talent and correctly praised and mentored him for a while. Rodin thereafter tried sending work to the great Paris exhibition, but it was sent back to him. And so it went, until eventually he was recognized and his work was included in the annual Paris Salon exhibition.

One of the most well known pieces he sent there in those first years of his success (in 1877) was the figure known as ‘The Age of Bronze’ depicting primitive man. The body depicted was fairly modern and created a sensation amidst other Paris artists. It was so realistic and so reminiscent of a live individual that one critic didn’t believe Rodin himself had made it, but rather thought that a live person inhabited it.

His talent was recognized but he was sharply criticized and ridiculed with his choice of work — and here’s the point:

Rodin didn’t create his work to look sculptural, but sought out a new innovative way that didn’t overwork the details and left much unfinished. The main issue to him was the overall impression the figure made. His goal was always to express a main idea, and to communicate that boldly. For instance, in making a statue of a man deeply engaged in thought, everything about the sculpture is concentrated and thus leads to that one main point — the man being deep in thought.

With Rodin, this is articulated so intensely, that looking at the sculpture one feels this idea hotly embed within, as though branding itself in one’s own heart. It is an unforgettable experience. The rest of that figure — unrelated to the philosopher deep in thought — was given much less consideration by Rodin.

Other sculptors spend much time and energy finishing details of the eyes, mouth and hands but all told their work makes less of an impression than Rodin’s ‘unfinished’ statues.

He didn’t dwell on any one thing and seemed to throw out the rulebook. He worked intuitively — that being the one rule he did obey. There’s the time Balzac, the great French writer, commissioned a statue from him. Rodin then created a figure of Balzac wearing his plush dressing gown that covered him from his neck down to his toes! “Balzac must have appeared to him as a giant upended turtle” people lamented.

But Balzac spent entire days and sometimes even nights in his bathrobe. That’s how he used to sit, stand or wander from room to room as he created. And when one observes the face of Rodin’s figure one perceives that complete essence of the acclaimed writer. That, along with the way he’s posed standing in his plush robe — is a wonderful figure of the writer and the man. It creates a remarkable impression and a realistic imparting of Balzac’s spirit.

A rule of sculpture is to display the actual figure, and not to conceal it completely. And so the sculpture was condemned.

Rodin, however, remained unconcerned and won the public over soon enough.

To explain succinctly what Rodin’s talent was composed of would take up too much room, but one fact is critical — that we have not yet gotten accustomed to him, it’s still new — and the world isn’t rushing to absorb it yet. Frequently, the response to innovation is to condemn it to death, or ignore it so it remains unseen and unheard. Columbus was tormented for years prior to getting his plan a hearing thus enabling his vast journey and the discovery of America.

Mostly the world hates those who stray from its old, well-trod pathways. Those who don’t merely follow along with others, who strive to have their own particular practice and who possess the talent and courage to say something different — for them the world is very conservative and intolerant.

And when the artist finally convinces the world they are worthy of recognition, their uniqueness and originality itself is a source of respect and admiration attracting others to them.

They must be fearless in the face of condemnation and ridicule, and keep moving further, trudging along their unique path, with head held upright — and with this strong frame of mind, this refusal to be cowed in the face of all manner of remarks tossed their way, others are then equally moved.

This is how it was with Rodin.

Those who earlier refused to pay any attention to his work now lie before him. His figures, once the objects of laughter, are recognized as part of a body of work created by a serious talent, by an indomitable strength. He’s been given awards and honors. Paris is at his feet.

The fact that Rodin wasn’t discouraged, withstanding a steady decline and continuing to work, shows his deeply rooted interest in his art and the depth of belief in his own capacity. Yet that alone isn’t a sign of true greatness. There are plenty of artists who struggle as Rodin did before achieving recognition, who aren’t great or even talented. The world has many boneheads who think much of themselves and, who similarly, have loads of energy, perseverance and even more chutzpah. But when somebody does have a huge talent and therefore also a vigorous character and doesn’t cave in to the negative critics nor to the contempt and snickering, then his iron will, that deep faith in himself is part of that same spirit bound up with his talent.

Yes, talent alone isn’t enough to create greatness. It also takes character, a steely inner faith. Rodin’s spirit was unbeatable. One sees that in his work, as well as in his personal life.

Most importantly, he followed his own path and refused to just follow along with the masses. And so it is with all the great ones. There are differences among them though — and in order for greatness to emerge one must have something original to say, one must create something that makes a deep impression forever, something that time will not erase. Such great ones, such tremendous minds, are few in the history of civilization.

Rodin was one of them.