Robert Smigel Shows His Serious Side (And Triumph’s Back Side) 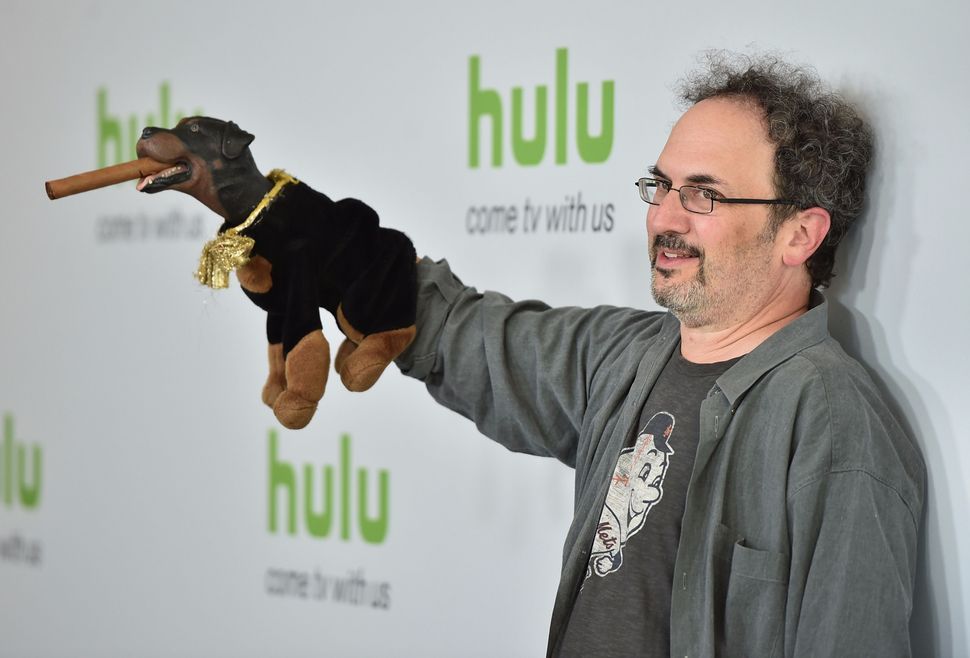 Robert Smigel has spent a good deal of his professional life with his hand up a dog’s tukhes.

And, no, he is not a veterinarian.

Smigel is a comedian, writer and producer and his canine companion, Triumph, the insult comic dog, is the Don Rickles of pooches.

Beyond the snappy lines, though, beyond handling (literally) a dog who tells you he plans to poop on you, Smigel is a latter day Pagliacci, the clown laughing on the outside crying within. It is that crying part that inspired, “The Night of Too Many Stars,” a benefit he started 15 years ago, after learning his son suffered from autism. This year’s airs on HBO Nov. 18 at 8 p.m.

The son, Daniel, now 19, has “a fair amount of challenges,” Smigel said in a telephone interview. “He’s mostly non-verbal and has other difficult issues.”

By the time Daniel was about one, he could eat with a fork and speak. But he began to lose both motor and verbal skills. At first, their pediatricians said it was nothing to worry about. At the time, less was known about autism, and though Robert and his wife Michelle, probably suspected otherwise, the doctors were telling them what they desperately wanted to hear.

“The physicians told us not to worry and I didn’t want to be a helicopter parent,” Smigel said. “One day, my wife flat out asked me if this” — autism — “could be a possibility.”

They went online, found a list of signs your child might be autistic “and we checked off a lot of them.” The more they investigated, the more they discovered not only how little was known about the disease, but how few services were available to those who had it.

“Making people laugh was the most important thing in my life until my son was born, and then it became something I had to do. With the diagnosis, it dropped in importance again,” Smigel said.

Then a writer and occasional performer for Saturday Night Live, he told SNL producer Lorne Michaels he had to leave “to concentrate on my son.”

It was difficult. At one point, Daniel would injure himself. “It was a very hard thing to do, but I was told it would be safer if he was in a residential school, a place with a program that could deal with his issues.”

But they were few and far between. “I had a famous dog puppet,” he says with a chuckle. “I had resources compared to most people,” but still he couldn’t find a community for Daniel.

At first he got together with other parents in similar circumstances for a fundraiser to start their own residential community, which, with Jon Stewart’s help, metamorphosed into “The Night of Too Many Stars.”

“I’d met Jon once or twice and I asked him to participate. I didn’t really know him at all, but he had a lot of empathy. He had so many questions about my son’s situation and how it was affecting our lives and the challenges my wife and I had in finding people to help him. It wasn’t enough for Jon to appear on the show, he really wanted to help us and make a difference.”

It was largely through Stewart’s efforts that “Night of Too Many Stars” landed on Comedy Central, where Stewart at the time was the Daily Show God. (The first year it aired on NBC, which did not renew it.) Now that Stewart is under contract to HBO, he used his considerable influence to land the telethon there.

Despite all the money raised for autism research generally — $24 million to date — the personal expenses Daniel’s care generated soon required Smigel to get back to work. In a way, he says, “It was almost a relief on some level to get out.”

But with Robert out, the entire familial burden fell on Michelle. In many families, Robert noted, this created tension and discord. Here it brought them closer together.

“I was putting more trust in her than ever. She was doing everything finding the right people. She made it possible for me to go back to work.”

She was also indirectly responsible for the creation of Triumph. “My wife found these puppets at a furniture store we were shopping at. They were realistic dogs, cats and sheep. So I put one on and immediately used it to sniff her butt.”

On his next birthday, Michelle surprised Robert with several puppets, and he was soon off to the races or the dog pound. The voice he used was imitative of the accents he heard from his maternal grandparents, immigrants from Russia. But the attitude is all Smigel.

Consider who told flailing presidential candidate Mike Huckabee his supporters didn’t know the meaning of the word surrender “because they were educated in Arkansas public schools.”

Or his Emmy nominated Hulu election special where he did advance work for a Chris Christie appearance at a New Hampshire diner and made certain, among other preparations, that there would be no food in the governor’s line of sight, lest he lunge for it.

Or on Hollywood Squares when asked to name the heaviest dog, he answered: “The Lhasa Oprah.”

Growing up, many of Smigel’s comic heroes — David Letterman, Steve Martin and the Harvard Lampoon gang —were moving in a more ironic direction. But Triumph has clearly “more of a direct, more of a Jewish sense.”

Smigel grew up in Manhattan the son of a successful dentist. He attended a Jewish day school for the first five grades and was raised in a kosher, fairly conservative home. He is observant and nearly turned down a Big Deal because of it.

He was slated to direct an Adam Sandler movie he co-wrote with the star when his father passed away in October 2016. Recognizing his obligation, he told Adam he’d have to dropout because he couldn’t let it interfere with his saying Kaddish three times a day. But Sandler — the two had worked together several times, going back to their SNL days — told him not to worry. They’d work around it. The film was shot on Long Island and, sure enough, the local chabad arranged minyans for him as needed.

I asked Smigel if I could speak to Triumph, but sadly was informed that he was not available. “He’s in a Duane Reade bag somewhere in my house,” a fact the ASPCA is obviously oblivious to.

Okay, then, Bob, I said, between us, do you feel you are violating Triumph’s privacy holding him the way you do? Apparently not: “It feels less invasive the more money I make.”

Robert Smigel Shows His Serious Side (And Triumph’s Back Side)