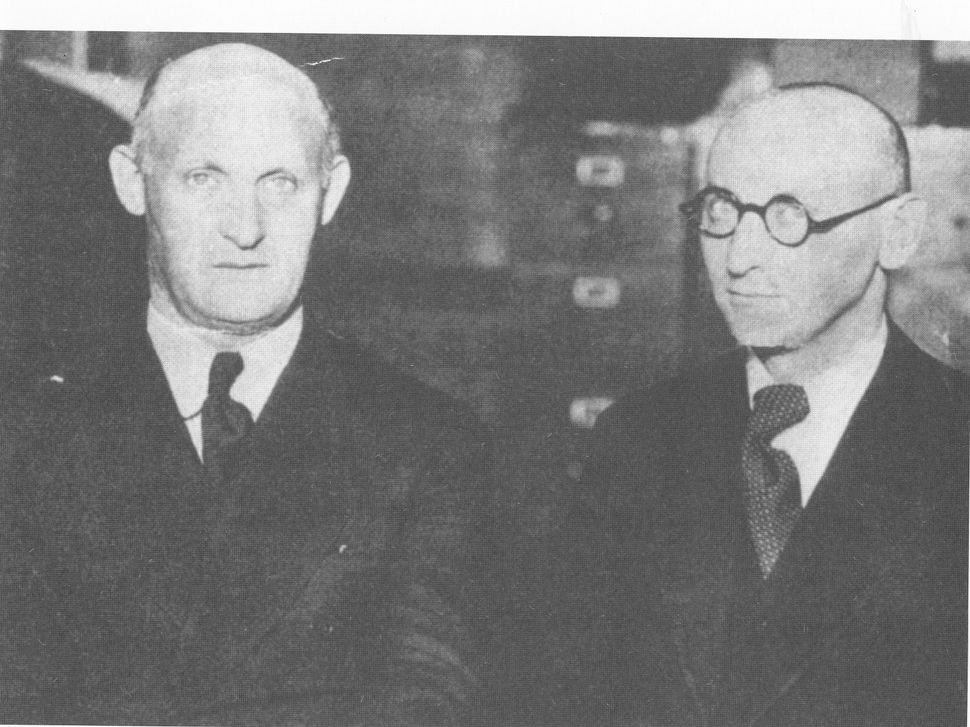 During the early twentieth century, the New York–based socialist daily, Forverts, the progenitor of the very Forward you are currently reading, was the largest and most successful Yiddish newspaper in the world. Among the local, national, and international news, editorial, literary, and entertainment pieces it printed, the Forverts also commissioned original reporting on all manner of subjects. Among these was the lives of the Jews of Poland, the former homeland of many Forverts readers. The rich life of this large Jewish community was of significant interest to immigrant readers and Ab. Cahan, the paper’s editor, latched on to Israel Joshua Singer, the older brother of Nobel Prize-winning author, Isaac Bashevis Singer, to supply reports from Poland. Writing under the pseudonym, G. Kuper, Singer provided some of the juiciest and most intriguing stories to be found in the paper. Here’s one from the December 21, 1927 edition of the Forverts, which can also be found in “Bad Rabbi and Other Strange but True Stories from the Yiddish Press,” by Eddy Portnoy

I’m going to tell you two stories, one about Puny Khane and Shimshon Gramophone and how they tried to con Krochmalna Street; and another about how Khaym-Yosl Jackass committed a grave sin and just how he was punished by the denizens of Krochmalna Street. In the end, you will have to admit that truth and justice reigns on Krochmalna like no other place in the world.

First off, the story about Puny Khane and Shimshon Gramophone. For twenty years, Puny Khane and Shimshon Gramophone made a living off of Thomas Edison. Out on the streets, Khane would play their gramophone and Shimshon would dance and, for many years, they earned their bread. When the device was considered to be some kind of miracle in Jewish cities throughout Poland, they lived quite nicely off the gramophone. Everyone wanted to see how this “box” played music and sang. Many believed that there was something mysterious about the thingamajig, that there was some kind of magic involved, something from the “other side.”

It was later on that the business went south. The gramophone became a generally popular item and began showing up in private homes. As a result, people on the street stopped paying to hear them play. It was then that Puny Khane and Shimshon Gramophone began to wander through the smaller towns, where gramophones were few. And then, when gramophones began to appear in these smaller towns, the dancing duo was forced to relocate their trade to the really tiny villages, where the machine was still a wondrous novelty. Peasants were thrilled when they heard the box, dancing about and praising the “English wise men” who had concocted such a marvelous thing.

“Get outta here, you idiots!” They were driven away from all sides. “Who wants to hear a gramophone when there are such wonderful, little fortepianos in the world?”

“For sale, cheap!” pleaded Puny Khane. “This thing is a goldmine. It made us a fine living for twenty years.”

But they all laughed at her. “Why don’t you just give it a nice funeral,” people advised. “If not, maybe put it in an old folks home.”

Puny Khane saw that nothing would come of the old gramophone, so she sat down with her Shimshon and the two decided that they would begin working the “dread disease” — in other words — epilepsy. Every morning, Khane would go out into the street and collapse in a heap, her legs shaking in an “epileptic fit.”

Obviously, Shimshon Gramophone would show up right away to save her. He’d hand her a large key to grab on to, which would calm her down. People would start to congregate just as the sick woman would begin to come around.

Shimshon Gramophone would then launch into a fiery speech: “It’s been three days since she’s had something to eat. Have mercy on the sick!”

People would throw five cents, ten cents, twenty cents. When they would collect enough money, Khane would head over to another street to have another epileptic fit.

The money wasn’t bad, even better than with the gramophone. But certain people were jealous and some of them began to spoil their new scheme. “You see that? See?” they griped. “You just had a fit in that street over there! Now you’re doing it again?!”

Puny Khane would try to defend herself. “Whatcha makin’ such a big deal for?” She was furious. “I can’t have more than one attack? I’m not allowed? What’s it cost ya, sweetie?”

But then, the police started to take notice. The “dread disease” became too difficult to get away with. Puny Khane and Shimshon Gramophone talked it over and it was decided that Khane would have to start committing suicide.

Every morning at sunrise, Khane would sneak into a big apartment courtyard around which lived well-off Jews. She would climb up to the fifth floor, stand in an open window and start screaming, “Everybody, wake up! People, I’m going to chuck myself out of the fifth-floor window. I’m gonna do it! Help!”

Coincidentally, the first person to see her would be Shimshon Gramophone, who would start shouting, “Somebody, help! Don’t do it!”

From all over the courtyard people came out and begged her to have mercy on herself.

Women would rush down with pillows, bedding, comforters and begin spreading it all out on the pavement.

But there was no stopping Khane, and she prepared to jump. Women began to faint. They’d scream and shut their eyes so they wouldn’t see the horrible sight.

“Let me go! Let me die!” Puny Khane would scream.

In the end, Shimshon Gramophone would succeed. The crowd in the courtyard would heartily applaud him and then donate money to that poor woman who had just been rescued from certain death.

This business was a goldmine! Forget Edison with his gramophones and fortepianos!

But how does the saying go? “When you are destined for tragedy, you seize it with both hands.”

One day, Khane went a little nuts and got the idea to go into the courtyard of 11 Krochmalna and threatened to throw herself off the top floor.

The residents of Krochmalna saw her and became furious. “What’s this? Why us on Krochmalna? She’s going to kill herself up here on top?”

And all of them — the entire building — ran out into the courtyard, stood there, and started yelling, “Jump, jump! Faster!”

Shimshon Gramophone jumped up and started running to “rescue” the woman, but he was held back by some of the young Krochmalna hoods, who wouldn’t let him through.

“Let her jump! Nobody needs to ‘save’ her. We know these tricks.”

Standing in the window, Puny Khane figured out that things weren’t going well and wanted to get out of having to commit suicide, but Krochmalna wouldn’t let her.

Khane began screaming for help, that she had regrets, that she wanted to live. But the residents of 11 Krochmalna wouldn’t let up. “Jump,” they yelled. “If you don’t, we’ll come up there and throw you off ourselves.”

Now Puny Khane really yelled for help. “Shimshon!” she screamed to her regular savior, “Shimshon, save me! They’re going to kill me!”

Thrashing, Shimshon tried to tear himself away, but the Krochmalna toughs were stronger.

“Spread out some kaftans!” some kids demanded. “The quicker this sucker jumps, the better.”

And no sooner than Puny Khane showed up at 11 Krochmalna to kill herself, she flew out of a fourth-story window and landed on the ground with a thump.

“There it is. Don’t ever come to Krochmalna to play tricks,” the courtyard’s kids said to the crumpled woman.

She was treated with mercy. Puny Khane had fallen on the kaftans that the residents had spread onto the pavement and only broke her leg. In the ambulance on the way to the hospital, Khane couldn’t stop tearing her hair out.

“A tragedy! Who knows if I’ll ever again be able to earn money as a jumper? What a tragedy, what a misfortune!”

In the Warsaw papers, the only news that was reported was that, at 11 Krochmalna Street, Khane Simkholovitsh was thrown out of a fourth-story window.

For more, read “Bad Rabbi and other Strange but True Stories from the Yiddish Press.”

(c) 2018 by the Board of Trustees of the Leland Stanford Jr. University. All rights reserved. Used by permission. Published in hardcover, paperback and digital formats by Stanford University Press, sup.org. No reproduction or any other use is allowed without the prior publisher’s permission.