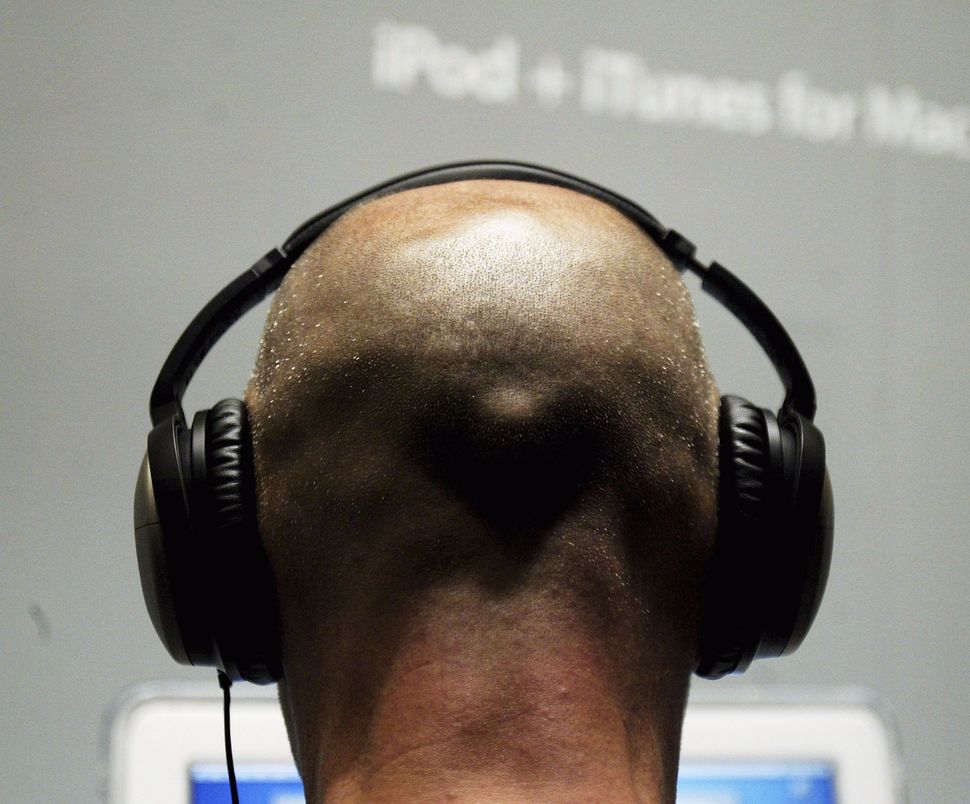 Podcasting, you may have heard, is booming. Listenership is up, so is awareness of the medium, and high-quality podcasts seem to be popping up everywhere. As with television, the medium itself has recently become more respectable, including among the Hollywood A-listers; Oscar Isaac stars in “Homecoming,” while an episode of “Reply All” is being adapted into a film starring Robert Downey Jr.

In comparison to more established media, though, podcasting is still a kind of Wild West, with plenty of risk and plenty of room for growth. But as ad revenue grows and production becomes increasingly consolidated, and as the medium becomes increasingly integrated into the existing ecosystem of television, film and print media, it is no longer difficult to imagine the day when this frontier media will become fully developed.

Despite these advances, Jewish-content podcasting lags noticeably behind. The charts are utterly devoid of Jewish shows, and emerging podcasting platforms like Gimlet and Radiotopia have yet to express any interest in developing them; only two shows, “Unorthodox” and “Israel Story,” have achieved mainstream success. As the medium surges ahead and the cost of entry becomes higher, it is worth considering why Jewish podcasting is stuck in neutral.

Here’s my assessment of the state of the field, along with some suggestions about how to make sure that Jewish podcasting does not miss the opportunity this moment presents.

Many Jewish podcasts are not actually podcasts.

While the total number of Jewish podcasts continues to grow, every listener who has explored beyond the greatest hits of the genre knows that there are podcasts and there are podcasts. Yes, one can use the same app to download both “Serial” and a Talmud lecture taped on a $10 recorder, but the two differ in almost every other way.

Quality control remains an issue in the medium generally, but Jewish podcasting — and really the religious podcasting space as a whole — is afflicted with mediocrity not because of a lack of talent, but because of an influx of the wrong kind of talent. For this, you can blame the clergy, whose lectures and sermons — aural products that were already being propagated on the radio, on cassette tape and in digital formats — could be brought into the podcast space for almost zero cost.

These podcasts — which were never really designed to be podcasts — should have been only the first, transitional stage of Jewish podcasting, giving way to products more attuned to the possibilities of the new medium. Ten years in, however, clerical podcasts continue to dominate the Jewish (and Christian and Muslim) podcast charts. Jewish podcasting, in other words, continues to be associated with shows featuring nothing fancier than one person speaking, without interruption, for anywhere between 10 minutes and two hours. Competing against the likes of “S-Town” and “Revisionist History,” it’s no wonder that not a single such podcast sits in iTunes’ top 100. The real question: Why hasn’t Jewish podcasting moved on from here?

The vast majority of Jewish podcasts continue to be produced by educational institutions. As with individual educators, these institutions desire to move beyond their brick-and-mortar buildings; they want to share the wealth of their educators with anyone else who might want to listen.

These are good and noble goals, but a podcast produced under these conditions is unlikely to become wildly successful, just as video-recorded lectures are unlikely to become must-watch TV. More than recording on good microphones in quiet spaces, good podcasting demands drastic changes to the content itself, the hiring of sound editors, and methods of speaking that even seasoned Jewish educators may never have encountered. Great podcasts are born into the medium, not repackaged from somewhere else.

Unfortunately, most institutions balk at the prospect of creating a nonderivative podcast. Although podcasting makes it possible for a brick-and-mortar institution to talk to the whole world, most institutions are unclear about to whom — outside of their existing demographics — they would wish to talk. An educational institution doesn’t become a media company overnight; never having considered the possibility that they might hold a megaphone this large, most institutions usually stick to their existing mission statements and produce shows designed to reach alumni and other already interested parties. Without a strong motivating ideology, the podcasting budget is almost never made large enough to create more than a series of edited conversation (and since these podcasts can never grow large enough to be taken seriously by advertisers, they must always rely on funding). There are no two-for-one deals; in podcasting, as in all other broadcast media, you get what you pay for.

Right now, the best religious podcasts are those that try to create conversations that can’t/won’t happen elsewhere.

One of the first significant religious uses of podcasting was “Mormon Stories,” now its 12th year. John Dehlin, the host, created the show out of a desire to have conversations about Mormonism, which could not take place within the confines of the church.

Jewish podcasts are finally picking up on the trend. Although the heavy bias toward educational-institution podcasts still exists, the past four years have witnessed the steady growth of a new set of podcasts. While topically and ideologically quite different from one another, these new podcasts are less interested in total listenership and more interested in saying something that wasn’t being said elsewhere.

“Treyf Podcast” is one example. The 2-year-old series, produced in Montreal, approaches the North America Jewish community from an explicitly leftist perspective; episodes have discussed Jewish reactions to police brutality, Jewish Voice for Peace and a Palestinian hunger strike.

David Zinman, the co-host of “Treyf,” told me that the point was never huge listenership: “If we were trying to have the most immediate impact on political discussion on a day-to-day basis we probably shouldn’t be putting it on a podcast.” Instead, the podcast was an attempt to create a Jewish conversation that could not exist in a place like Tablet magazine; Zinman hopes the conversation can help people see a different point of view and crystallize a new community through the intimate experience of hearing a conversation in one’s headphones. “We’re hoping to cultivate relationships with people long term,” Zinman said.

A similar community started to form around “Judaism Unbound,” which currently sits at No. 4 in iTunes’ ranking of Jewish podcasts, although co-host Daniel Libenson says the community element was a surprise to him. For Libenson, there needed to be a head-on, public conversation about the future of Judaism itself. Inspired by the podcast “The Critical Path,” which discusses Apple products and the future of mobile design, Libenson and co-host Lex Rofes set out to create an interview show with those who had a vision for the design of the Jewish future. Asked if “Judaism Unbound” is a religious tech podcast, Libenson said, “I’m comfortable with that description.”

My own organization, Jewish Public Media, has had success with the “new conversation” model, as well. Our most popular show, “The Joy of Text,” is an ongoing conversation about Judaism and sexuality, co-hosted by a rabbi and a sex therapist. While such a conversation was theoretically available elsewhere, the podcasting format and the discreetness of earphone listening made talk of Judaism and sexuality available in a way it had not been previously.

Even the best new conversations, however, must assume some prior interest in Judaism on the part of the listener; as a result, even these new podcasts have little chance to achieve popularity outside the bubble of America’s tiny Jewish minority.

The bubble exists even for “Israel Story,” which has not only achieved an impressive listenership but also has collaborated successfully with top-tier podcasts like “99% Invisible” and “Radiolab.” Mishy Harman, the show’s co-creator and host, notes that listenership for the English version of the show is large, but still clearly clustered in cities like Chicago, Boston, New York, and Los Angeles, where there are huge Jewish populations. (Harman demurs when I call the podcast “Jewish” and not “Israeli,” but he acknowledges that it is likely seen this way in America). Harman would like to see the absolute number of Jewish listeners increase, but he wants it to decrease as a percentage of the total. His ultimate goal: “We would like ‘Israel Story’ to become a household name.”

The collaborations on “Israel Story” suggest that this is very much possible, as does the fact that Jewish human interest stories have long been featured on shows like “This American Life” and “Reply All.” To pick just a few examples:

“Exit & Return,” in which Shulem Deen recounts his disengagement from his religious community, as detailed in his memoir.

“Home Movies,” in which Jonathan Goldstein walks the listeners through an old recording of his family’s Rosh Hashanah Seder.

“That’s Funny, You Don’t Look Jewish,” in which a Hasidic man from Brooklyn’s Williamsburg experiments with popular culture.

“A Not-So-Simple Majority,” the gut-wrenching look by “This American Life” inside a New York school district controlled by religious Jews.

Jewish content is clearly of interest to American listeners, but it has to be delivered with an eye toward themes of general interest, and — most critically — it has to be told as a narrative, as a story. In fact, I would submit, the medium of podcasting is particularly well suited to the communication of religious messages.

The emotional medium of podcasting is ripe for religious stories.

Podcasting, like radio, can be a vehicle for deeply intellectual content; the early success of shows like “The History of Rome” and “EconTalk” is testament to that. Podcasting’s real strength, however, lies in its ability to communicate emotion through the subtle nuances of music and the human voice. Malcolm Gladwell has cited podcasts emotionality as the reason for his shift to the medium; whether sad, funny or angry, oral stories have a unique power in this regard.

Unfortunately, the vast majority of Jewish podcasts are anything but emotional; if anything, the trend has been toward greater intellectualism. This need not be the case: The most powerful religious messages are full of emotion, and the stories of religious lives are full of emotion, too. When Jewish stories are told in American podcasts, it is uniformly the emotional element that is given priority.

The almost complete absence of emotive Jewish podcasting is a lacuna worth fixing; if the medium presents Jewish content with a unique opportunity, it is here.

David Zvi Kalman won a 2017 Rockower Award for his Forward article, “The Strange and Violent History of the Ordinary Grogger.” He is co-founder of Jewish Public Media.