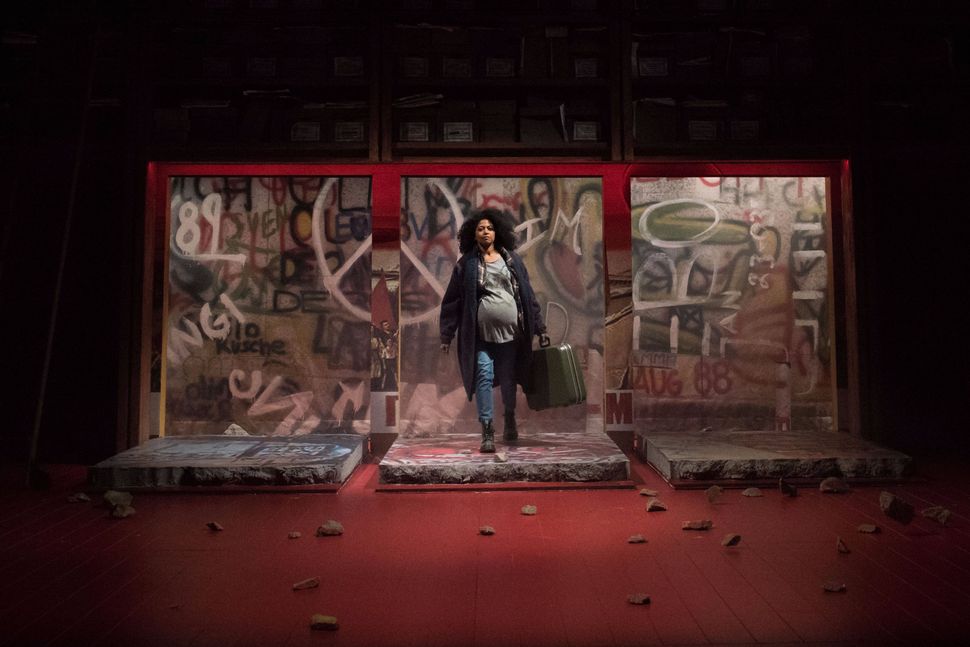 Or else perhaps they’re all versions of the same thing.

“Describe the Night,” which opened last night at the Atlantic Theater Company in Chelsea, weaves together history and myth, fact and fiction, beauties and horrors. It tells several true stories — the life of Isaac Babel, the great Russian Jewish novelist; Stalin’s purges; the mysterious 2010 plane crash that killed much of Poland’s political and military leadership — and it links them together in a fictional epic tale. It suggests that governments shape tales as artfully as writers do, that the horrors of the 20th century are not far behind us in the 21st, and that it is possible we will never be sure that we know what we think we know. It is a thoughtful play, an important play, and, in this Fake News era, when our leaders repeat the facts they choose to believe, whether or not they’re true, a chilling one.

These things are historical facts: Babel was born in Odessa, served in the Red Army as a wire service reporter, carried on a long extramarital affair with the wife of Stalin’s secret police chief, and was killed in a Stalinist purge in 1940. Nikolai Yezhov, that NKVD chief, oversaw some of those purges, fell out with Stalin, was executed and then erased from Soviet records and photos. And in 2010, a Polish Air Force plane carrying dignitaries to Smolensk, Russia, to commemorate the 70th anniversary of a Russian secret police massacre of Polish nationals during World War II, crashed while landing, killing everyone on board.

In Rajiv Joseph’s play, those events are all connected, by Babel and Yezhov and Yezhov’s wife and a journal that Babel kept while in the army, filled with observations and writing exercises. (“Describe the night” is a challenge he gives himself in the play’s first scene, coming up with “a sullen patchwork of stars.”) Over three acts and nearly rapt three hours, we bounce from the 1920s to the late 1930s to 1989 to sometime near today, moving backward and forward in time as Joseph’s invented story, and the connections among his characters — both the historical figures and several he invented, including one who grows up to be Putin, more or less — and these moments.

Joseph is interested in history and morality, leavened with a dash of whimsy. His “Bengal Tiger at the Baghdad Zoo,” which played on Broadway in 2011 and starred Robin Williams, made its author a finalist for the Pulitzer Prize before it had even come to New York. It considered the chaos of the American occupation of Iraq, and contemplated the motives and actions of nearly all the actors there: conquering but confused Americans, proud but humiliated Iraqis, a tiger (played by Williams) with an existential bent.

In “Describe the Night,” he is considering the power of storytelling and dangers posed when the powerful and malignant wield know how to craft stories, too. But it’s not a didactic history lesson. Directed by Giovanna Sardelli and featuring remarkable actors like Danny Burstein, as Babel, Zach Grenier, as Yezhov, and Tina Benko, as Yevgenia, Yezhov’s wife, it remains a stubbornly human story, as we watch these people buffeted by the forces of history. Burstein, especially, excels at making icons seem humble and approachable, doing here with Babel what he did with Tevye in the recent “Fiddler on the Roof” revival.

As settings come and go in Tim Mackabee’s design, the stage is always dominated by innumerable looming file drawers. Everything we’re seeing is filed away, another story, another document. In one of the play’s more fanciful segments, Yezhov lives on long past his death, toiling away in a secret KGB archive, altering documents to make different facts — alternative facts, even — true. Those ever-present files are a reminder that everything we’re seeing, everything we know, are just more facts, subject to alteration.

And what makes the play so bracing is to realize how little so many of these things have changed; even if the actual historical words aren’t as current as Joseph renders them, the impulses still are. In the 1920s, Yezhov, as a soldier, slams Babel’s fictional musings as lies and inaccuracies. The same currents that run through Stalinist rewrites of history reappear in the Putin character’s take on the Smolensk tragedy. (To be fair: The play strongly suggests the crash was a Russian conspiracy; investigators do not agree with that interpretation.)

And they’re happening in America, with a president who now suggests that the “Access Hollywood” of him were faked, with Senators who defy economists’ expertise on the implications of a tax bill. Everything old is new again, and “Describe the Night” is both riveting and terrifying.

Jesse Oxfeld has written about theater for New York Magazine and Town & Country.