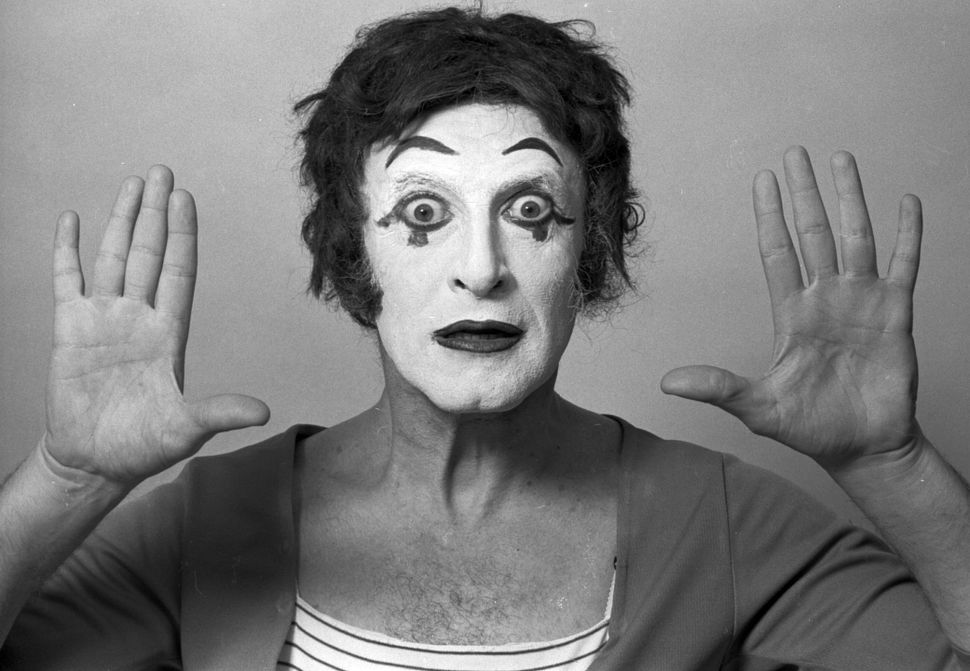 In 1974, the legendary mime Marcel Marceau appeared in a TV advertisement for Xerox color copy machines. The ad lasted 90 seconds, during which — as the writer Shawn Wen describes in her recent book on Marceau, “A Twenty Minute Silence Followed by Applause” (Sarabande Books) — the Frenchman pantomimed the actions of a robot, acted out photocopying a piece of paper and pretended to push the machine around a room. Before the ad’s end, he told viewers: “Call Marcel Marceau. If no one answers, it’s me.”

The joke, of course, plays on the fact that Marceau was world-famous for being silent; for performing up to 300 shows per year across countless countries; for founding the Marcel Marceau International School of Mimodrama, in Paris, and for, as Wen pointed out in a recent interview, essentially providing the mental image we associate with the word “mime,” complete with sailor’s suit and white face paint. A critic once wrote of Marceau, “He can say more with one eyebrow or one ripple of the fingers than would-be clones can do with their entire bodies.”

But despite the Xerox-ad joke, Marceau was, in fact, a prodigious talker. “Only one guy out-talked me. Marcel Marceau,” the oral historian Studs Terkel said in the book. And Wen provides no shortage of evidence.

“I’m the Picasso of mime,” Marceau said in one chapter.

“Does not pantomime offer the language of the heart?” he asks in another.

Those traits are on display throughout this small, wondrous book, but in particular on a page toward the end. “By 1993, Marceau had racked up some fifteen thousand performances in more than one hundred countries,” Wen wrote, explaining that if Marceau caught the flu while on tour, he would still take the stage. Wen then includes a Marceau quote that at least partially explains his tirelessness: “Theater people, if we are not seen, we don’t exist, we are nothing.”

“A Twenty Minute Silence Followed by Applause” is not a traditional biography. At 131 pages, it is as sleek and sinewy as the performer it describes. And instead of lengthy chapters, it is filled with short bursts of text that often read like poems. This is biography as pointillist essay. Or as Wen calls it, “a deeply experimental, playful book” that’s intentionally hard to categorize.

More than a dozen of these mini-chapters describe Marceau’s shapeshifting performances as his signature character, Bip: Bip the soldier; Bip at a society party; Bip attempting suicide; Bip playing David and Goliath; Bip as a bullfighter and ice skater and deep-sea creature. Other chapters list items belonging to Marceau — clocks, books, knives, dolls, masks, silverware — that were sold at auction in a failed attempt to recoup the nearly 500,000-euro debt he left behind after his death in 2007.

These matter-of-fact entries are interspersed with lyrical meditations by Wen on the nature of performance itself. “The mime refashions time, sculpting it with a precision instrument,” she writes. “He can suspend it or hasten it at will. He marches in place for three minutes and a lifetime has passed. In three minutes, eighty-four years.”

Elsewhere she writes: “As we watch the mime’s expressive form, we lose awareness of our own. We forget to breathe. Thank God our lungs inflate and deflate on their own. This is why — at performance end — we scream, stomp our feet, and throw our hands together. And we violently reawaken to our bodies.”

But unorthodox as the book is, there is still a remarkable biographical narrative at its core. Marceau was born Marcel Mangel, in Strasbourg, France, in 1923. His father. Wen wrote, was “a Jew, a butcher, a communist,” and he died in Auschwitz, “the body taken to the crematorium before his identity was recorded in the log.” Marceau was 16 years old in 1939, when Germany invaded Poland. “His brother emerged as a leader of the Underground in Limoges,” Wen writes. “Marcel became a forger. With red crayons and black ink, he shaved years off the lives of French children, too young now to be sent to concentration camps. He dressed them up as boy scouts and campers and held their hands as they went high into the Alps.”

After the war, Marceau studied at a hyper-serious school of drama in Paris, where teachers “wanted to create a new poetics of theater to supplant the decadence and mediocrity.” One instructor was so obsessed with the pure expression of bodily movement that he performed in the nude.

Marceau’s talent was visible early. In one of the book’s most memorable scenes, Wen describes his appearance on a French television show, when, performing for a rapt studio audience, Marceau pantomimes wrestling with a kite on a windy day, then mimics a cat, then waits for an elevator, takes the stairs, tosses out impressions of Buster Keaton and Charlie Chaplin, eats an apple, peels an orange and enjoys a bowl of ice cream. (“He takes a spoonful, and his smiling eyes are shocked with pain, teeth chattering from brain freeze,” Wen wrote.) Reading Wen’s descriptions, we see a genius at the

‘I could use words, but words would destroy the mystery of the illusion.’

height of his powers and understand his superstardom.

But as the story progresses, Wen frequently complicates the picture. We learn that Marceau was married and divorced three times, that he had four children but once admitted something: “Family is not important to me. I have no time to be a family father.” We learn that he was contracted to write a memoir in 1965 but never completed it. and that New York City Mayor Rudy Giuliani proclaimed March 19, 1999, “Marcel Marceau Day” in the Big Apple. We learn that he was the subject of a memoir by one of his lovers, titled “Marcel & Me: A Memoir of Love, Lust, and Illusion” and including the lines “His flesh was as soft as a jellyfish”; “He was all about control,” and “He cherry-picked his women from an abundant pool of the young and beautiful.”

We also see that, despite Marceau’s bluster, critics eventually tired of an act that didn’t evolve much. “There is always something rather sad about any performing artist who fails to realize that his career is over, but Marcel Marceau is riding on his name and past achievements to such a degree that one’s patience and pity is beginning to run out,” one critic wrote in the late 1990s.

Wen says she was drawn to Marceau, in part, by the dichotomy in his life story: the fact that a man lost so much in the Holocaust and went on to an entirely different life consumed by his art. “There’s something very poetic… [and] powerful about someone who, after the Second World War, after seeing the devastation that it wrought up close, then chose to live his life by traveling the world, performing something that is purely in movement… something that transcends language,” she says. “He claims that he cannot tell his fans apart. French, American, Vietnamese — all citizens defined by their adoration for him. He says they laugh and cry at the same moments. With a flick of his fingers, he reaches in and pulls out identical sighs.”

At Marceau’s funeral in Paris’s famed Pere Lachaise Cemetery, the rabbi who led the ceremony reminded the crowd that Marceau died on Yom Kippur, and had selected a “creamy white marker carved with the Star of David” to mark his grave.

In the decade since his death, there has yet to be a comprehensive biography of the world’s most famous mime. And yet this spare, poetic book feels like a complete and sufficient performance; the fiery life force contained in Marceau’s small body is here. On one page, Wen describes a routine in which Marceau progresses from fetus to an elderly man in the span of moments. On another we witness a poignant encounter at an airport between Marceau and an elderly Charlie Chaplin, whom Marceau idolized as a boy. In yet another, Wen presents three quotes from Marceau that perfectly — and paradoxically — capture the inadequacy of words. “I could use words, but to be very honest, it’s beautiful to be a mime,” he said. “Words would destroy the mystery of the illusion.”

Another: “Mime can do things that words cannot…. It describes the metaphysical world on the border of the real world.”

And, my favorite: “Mime can’t translate lies. For lies, words are adequate.”

Philip Eil is a freelance journalist and critic based in Rhode Island.