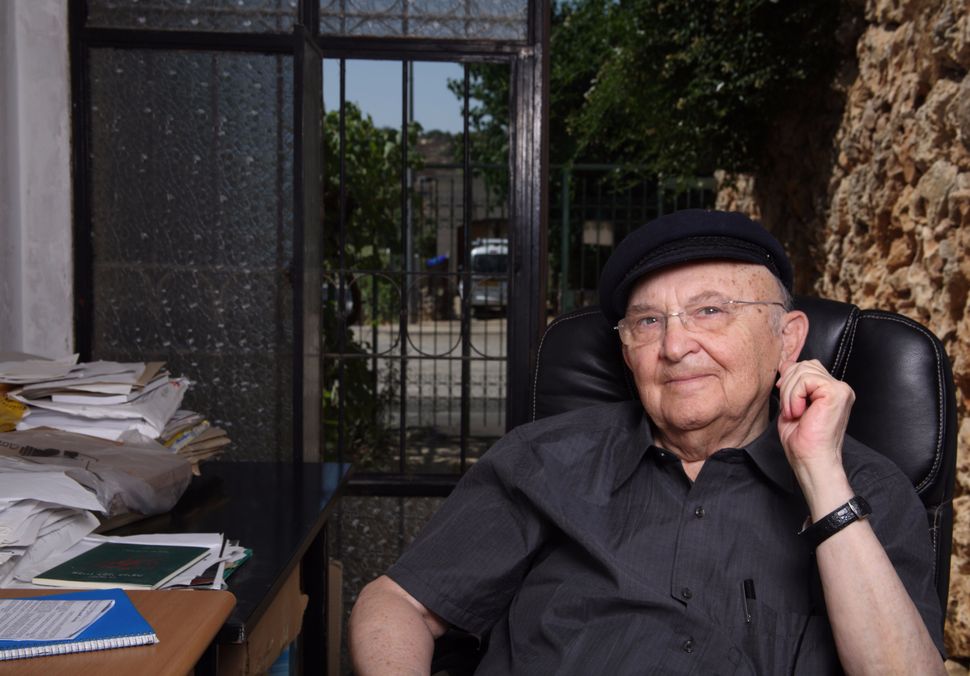 In Philip Roth’s novel “Operation Shylock”, a fictional Israeli writer named Aharon Appelfeld offers warnings about an identity thief targeting the narrator. In real life, Appelfeld, who died on January 4 at age 85, cautioned readers about what losing Jewish cultural identity might lead to. With a laconic, unelaborate style echoing his soft-spoken manner in everyday life, Appelfeld’s books, from “Badenheim 1939” to “The Age of Wonders” and “To the Land of the Cattails,” painted scenes where violent historical tragedy loomed. Yet the narrative tone was always deliberately reticent and spartan. This simplicity might have been expected from a writer who first learned his adopted language at age fourteen. Born to a prosperous assimilated family in the Bukovina region of the Kingdom of Romania, now Ukraine, Appelfeld spoke German at home and knew some Yiddish, Romanian, Ukrainian, and Russian, but had no time to become literate in any of them before the war arrived.

Appelfeld’s very survival was a matter of happenstance. When he was just over eight years old, the Romanian Army invaded his hometown in what was then Soviet territory and murdered his mother. Appelfeld and his father were sent to a Nazi labor camp in Romanian-controlled Transnistria, from which Appelfeld was able to escape because regional camps did not yet have electrified fences. He had blond hair and blue eyes and spoke the Ukrainian language, learned from maidservants in the family home, so was able to assimilate among people who had no clue that he was Jewish. Exploited as an unpaid servant by criminal gangs under the assumed name of Janek until he became an assistant cook in the Russian army, his experience was, as he admitted, so novelistic that it seemed closer to Jerzy Kosinski’s “The Painted Bird,” than real life.

To express his years of terror in fictional form, he used the Hebrew language, inspired by close study of the terse, chiseled prose of the Bible. As he explained to Die Zeit in 2005, “Hebrew became my mother tongue. And I’m very happy with that. It is an old language with a lot of silence. Short sentences, very short sentences and then a lot of silence. You say a sentence, you listen, you say a sentence. It has a music of its own.”

His own music was attained through hard work. Appelfeld, still a teenager, arrived at a refugee camp in Italy before being allowed to reach Jerusalem. There he asked for Hebrew lessons to join others in prayer, but the only willing instructor dealt out stinging slaps each time the pupil erred. With suffering inherently linked to Hebrew, Appelfeld nonetheless found a home, culture, and inspiration within a language. Yet he would regularly confront misunderstandings about his work. After Appelfeld’s death was announced, the writer A.B. Yehoshua decreed on Israeli radio that the former could not be termed an Israeli writer, because “he did not write about Israel,” favoring instead such subjects as the Holocaust and European Jewry. Apart from the pitfalls of classifying writers by nation according to subject matter, Appelfeld did indeed set some novels in Israel. “The Searing Light” (Michvat Ha) was about his adolescence, while “The Skin and the Gown” (Ha-Or Ve-Ha-Kutonet) dealt with Jewish postwar Aliyah. Further confounding critics, Appelfeld consciously refused roles that he felt fiction could not perform. About the label of Holocaust writer, commonly seen in his obituaries, he told “Tikkun” in 2006, “I never saw myself as someone who could take all the six million dead Jews on my shoulders and say, ‘I’m your voice.’ There were many who felt that they are the six million. Ka-Tzetnik — there are other writers, why name them? I felt that this was pretentious, without modesty. You should do what a person can do.”

This humility and reticence aside, his determination to depict Europe on the eve of the cataclysm, as in “Badenheim 1939,” revealed him as a writer who preferred to describe an ominous future rather than depicting violent themes outright. Yet he also wrote novels such as “Katerina,” in which a woman kills and dismembers a man, and “Until the Dawn’s Light,” in which another female character is an axe murderer. Hasty generalizations about Appelfeld’s work are as risky as assuming that because of his terse, minimalist style, his messages were less devastating or pointed than those of an overtly ferocious contemporary, the Hungarian Jewish Nobel Prizewinner Imre Kertész. Appelfeld’s subject of predilection was assimilated Jews, like those in his own family. He considered the loss of a sense of Jewish roots and special identity to be a form of suffering. As he wrote in an op-ed in The New York Times in 2005, assimilated Jewish survivors emerged from the Second World War “wounded and humiliated. They were betrayed by the neighbors among whom they and their forefathers had lived. They were betrayed by Western culture, by the Germans, by the language and literature they admired so much. They were betrayed by the great beliefs: liberalism and progress. They were betrayed by their own bodies.”

In a more colloquial vein, he told Philip Roth during an interview in 1988: “It is generally agreed, to this day, that Jews are deft, cunning and sophisticated creatures, with the wisdom of the world stored up in them. But isn’t it fascinating to see how easy it was to fool the Jews? With the simplest, almost childish tricks they were gathered up in ghettos, starved for months, encouraged with false hopes and finally sent to their death by train. That ingenuousness stood before my eyes while I was writing ”Badenheim.” In that ingenuousness I found a kind of distillation of humanity. Their blindness and deafness, their obsessive preoccupation with themselves is an integral part of their ingenuousness. The murderers were practical, and they knew just what they wanted. The ingenuous person is always a shlimazl, a clownish victim of misfortune, never hearing the danger signals in time, getting mixed up, tangled up and finally falling in the trap. Those weaknesses charmed me. I fell in love with them. The myth that the Jews run the world with their machinations turned out to be somewhat exaggerated.”

Even Roth, who was friendly with Appelfeld, partially mistyped him as a “dislocated writer, a deported writer, a dispossessed and uprooted writer.” Appelfeld was surely dislocated, deported, dispossessed, and uprooted until he reached Jerusalem at age fourteen. After that, he found a permanent home in the Hebrew language and everything that supported his sustained devotion to it. This included a series of coffeehouses in Jerusalem where he enjoyed puzzling out works in progress. “A Table for One: Under the Light of Jerusalem” was Appelfeld’s tribute, first published in 2001, to long-gone Jerusalem cafés he patronized in the 1950s and 1960s, where Hebrew conversations could be heard and overheard in vivifying repartee. Despite the disparate nature of Appelfeld’s many books, their common theme is complete dedication to, and inspiration from, the Hebrew language.