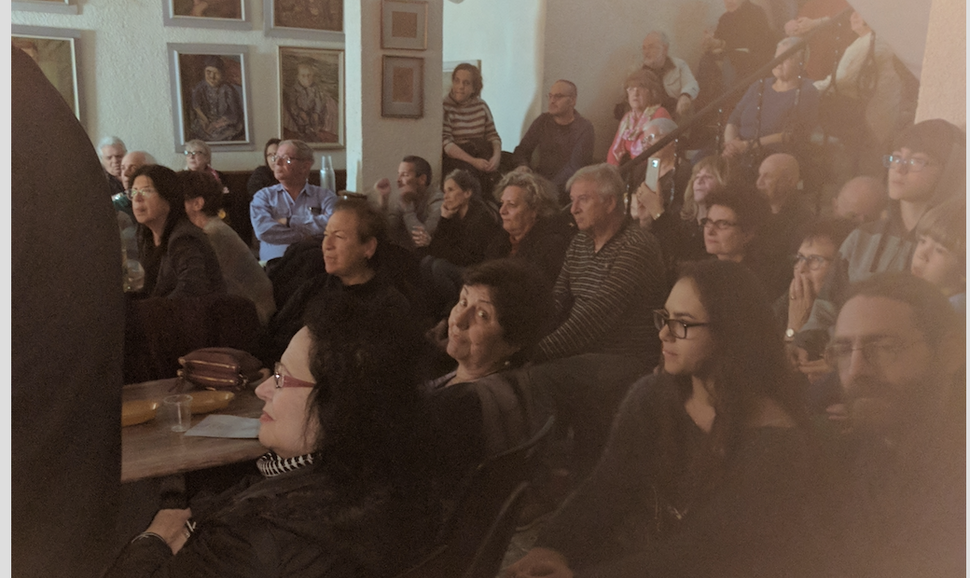 Recently, a sold-out crowd packed the Sholom Aleichem House in Tel Aviv for Yiddish cabaret. The crowd swayed and sang to Yiddish songs, including one about a young woman who reaches Buenos Aires and sleeps in the train station, and thinks of her dear mother, who she left back home.

The entranced, standing-room-only crowd seemed to know all the words.

Most of the event was in Yiddish but some parts were in Hebrew. Excerpts from Sholom Aleichem’s epistolary novel, translated into Hebrew, were read aloud. The letters, written by a fictional husband and wife, depict a husband who makes his way to Odessa and doesn’t succeed that much in his wild business efforts.

In one letter, he describes selling Londons. Yes — the city, plural. Not exactly a winning business strategy.

Vodka and herring rounded out the experience of returning to Odessa, home to many Jewish writers and thinkers. Ze’ev (Vladimir) Jabotinsky was an Odessa native; the poet Chaim Nachman Bialik and the writers Mendele Mocher Sforim and Ahad Ha’am were drawn to Odessa’s cultural scene and made their home there.

In addition to songs and staged readings, several professors helped put Yiddish literature in context. The Israeli poet Hamutal Bar-Yosef spoke about how Yiddish influenced Isaac Babel, and explained how classic Yiddish characters made their way into his early fiction.

The evening ended with a sing-along of Saul Tchernichovsky’s poem “Ani Ma’amin” or “I Believe” — sung in an Ashkenazi accent.

Aviya Kushner is The Forward’s language columnist and the author of The Grammar of God (Spiegel & Grau, 2015.) Follow her on Twitter @AviyaKushner