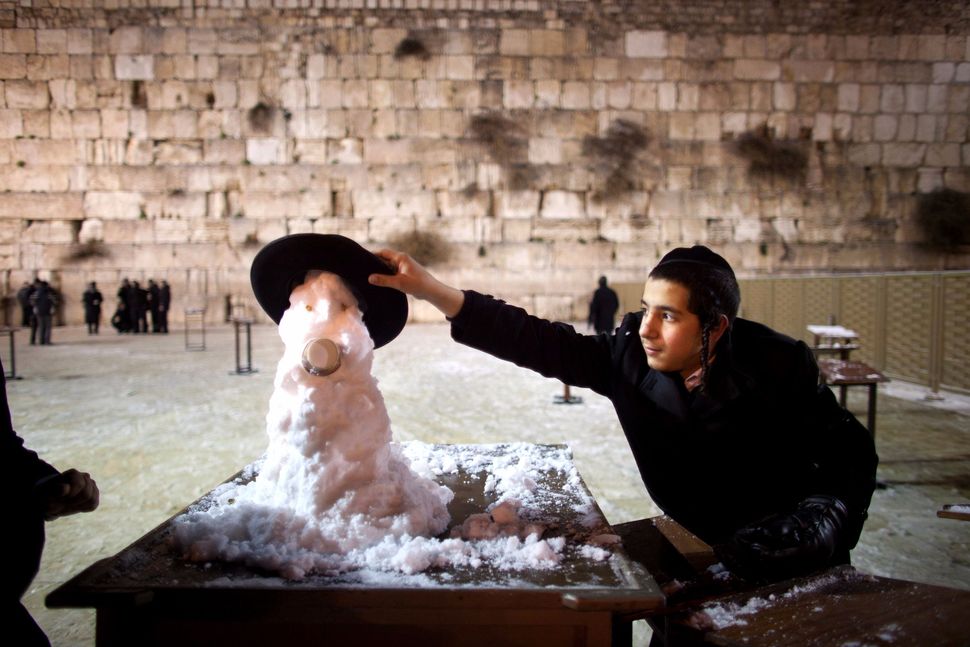 Jews have always had an ambivalent relationship with snow. On the one hand, we trace our origins to a desert land that typically features extremes of heat rather than cold. On the other hand, it does snow in Tiberias and Jerusalem — to that I can attest personally, having lived in both places in the early 1980s, when I had to scramble to buy a parka to fend off the wintry weather.

Many American Jews trace their recent lineage to the lands of Eastern Europe, where winters and snowfall are legendary and populate Jewish and Hasidic folktales, including “Footprints in the Snow,” one of the best-known tales of ”How The Wise Men Got to Chelm.” As the story goes, one day, a shamash, a rabbi’s aide, wakes up and sees a beautiful landscape of virgin snow. Needing to fulfill his daily duty to wake the town’s rabbi for morning prayers, but not wanting to spoil the glorious carpet of snow with his footprints, he drags his two sons out of bed in order to have them carry him to the rabbi’s house. The boys hoist him onto their shoulders and trudge through the snow to the rabbi’s abode. After tapping on the rabbi’s window and waking him, the shamash instructs his sons to turn around to carry him back home. Much to his horror, he sees not one but two sets of footsteps in the snow. “I tried so hard to make sure that the snow would remain beautiful,” he says, “but someone else came out early in the morning and ruined it.”

The Torah contains numerous mentions of snow, which is often seen as an image of purity. After complaining about how the people have abandoned their ways, God implores them to stop bringing animal sacrifices as payment, instead telling them, “Learn to do good, seek justice, vindicate the victim, render justice to the orphan, take up the grievance of the widow,” in the Book of Isaiah. God tells them what will happen once they have committed these acts of repentance: “If your sins are like scarlet they will become white as snow.” Later on, King David echoes this verse when he prays for forgiveness (for sleeping with Bathsheba, wife of his adviser, Uriah, and then killing Uriah to cover up his wicked deed) in Psalm 51: “Purge me of sin with hyssop and I shall be pure, cleanse me and I shall be whiter than snow.” In both cases the operative word is sheleg, Hebrew for “snow.” Building on this metaphor, Rabbi Judah Loew, aka the Maharal of Prague, spoke of snow as a vessel of spiritual light in the darkest days of the year — which if you think about it is pretty cool.

The allure of pure, white snow persisted for centuries and spoke to one particular early-20th-century Russian Jewish immigrant to the United States, saying “Go north, young man!” Sussman Russakoff fled Manhattan’s Lower East Side for the northern frontier of Maine, where he set up shop as a jeweler in Skowhegan in 1907, thereby doubling the population of Jews in the town. In his memoirs, Russakoff wrote: “When I arrived, the air was beautifully clear and frosty. The snow was as white as snow could ever be, and as one walked on it, it responded with a crispy clear singing. Its song was one of welcome to me.… I was willing to do all kinds of work just so as to get away from New York and have my wife and baby in a good, small place with plenty of fresh air.” You’ll still find Russakoff Jewelers in Skowhegan, now run by his grandson, Andrew Russakoff.

Russakoff wasn’t the only 20th-century American Jew drawn northward. While vacation resorts in the Catskills in upstate New York are typically thought of as refuges from the summertime heat of New York City, many East Coast Jews went there for ice-skating, skiing, sleigh riding and tobogganing, which were offered by such resorts as the Concord and the Pines, among others. At Kutsher’s, Milton Kutsher set up a snow-tubing course to go along with skating and skiing. And Grossinger’s, the queen of the Catskills getaways, is said to have been the first resort in the world to use artificial snow, beginning in 1952.

American Jews and, later, Israelis, have even made their mark in winter sports. As early as 1932, Irving Jaffee won gold medals in the 5,000-meter and 10,000-meter speed skating events at the Winter Olympic Games in Lake Placid, New York. In more recent times, an American, Gordon Sheer, participated in the 1992 Olympic Games, competing in the luge. Brother-and-sister snowboarders Taylor and Arielle Gold represented the United States at the Winter Olympics in 2014. Israel sent five athletes to the Winter Olympics in Russia that year, including figure and speed skaters and an alpine skier. The 2018 Winter Olympics will take place in February in South Korea, where the reigning world champion in slalom, Mikaela Shiffrin — who has Jewish ancestry on her father’s side — is favored to bring home the gold for the United States.

An entire world awaits those who search on the internet for “Jewish-themed snow globes,” including a Hanukkah-themed globe that plays the melody to “Maoz Tzur” (“Rock of Ages”).

Finally, in the Book of Samuel, it is suggested that killing a lion in a pit is a good thing to do in the snow. And, when faced with a lion in a pit in winter, it’s tough to argue with that.

Seth Rogovoy is a contributing editor at the Forward who lives in upstate New York. Despite his people’s great affinity for snow, he is not looking forward to shoveling it this winter.