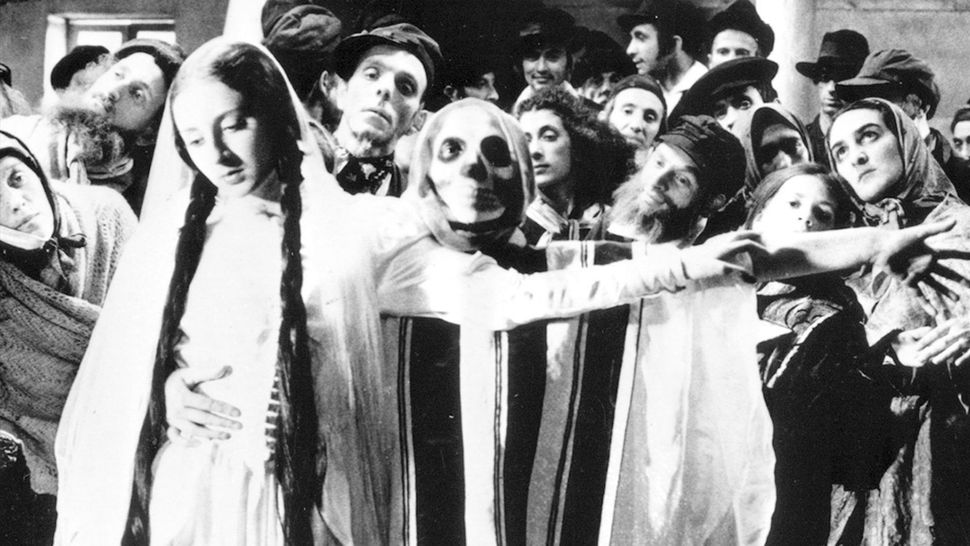 The Dybbuk Image by Venice Films

By the time of his death in 1965, few would have taken Michal Waszynski for the director of one of the classics of Yiddish cinema. He had been living a surpassingly posh life in Rome, inhabiting a gorgeous urban estate with a social circle that included many of the luminaries of Hollywood and Italian cinema, from Sofia Loren to Joseph Mankiewicz. He had led an aristocratic lifestyle, a fact that he formalized by getting himself made an official prince by the Italian government. Yet Waszynski was an unlikely noble. Born Moshe Waks in 1904 in Volhynia, a heavily Jewish region of the Russian empire, now split between Poland, Ukraine, and Belarus, his journey to the most glamorous heights of the film industry was both fanciful and desperate. A creation of the twentieth century’s most characteristic art form, his life now seems unmistakably cinematic.

Accordingly, the New York Jewish Film Festival is playing tribute to Waszynski, whose life is the subject of a new documentary, “The Prince and the Dybbuk,” which will play on January 11. The festival will also be showing Waszynski’s 1937 film, “The Dybbuk,” presented in a new restoration by the National Center for Jewish Film at Brandeis University.

Directed by Elwira Niewira and Piotr Rosolowski, “The Prince and the Dybbuk,” attempts to make sense of Waszynski’s schismatic transformations. The filmmaker’s biography is indeed tantalizing, all the more so for Waszynski’s authentically aristocratic sense of discretion. In what we do see of the man himself, he speaks little of his own thoughts, feelings, or experiences. Instead he’s seen in the company of gorgeous, wealthy, and powerful people, elegantly dressed and impeccably poised, perhaps offering a pointed bon mot or a peck on the cheek of some young actress but never any lengthy discourse.

In place of substantial disclosures from their subject, Niewara and Rosolowski have constructed a heady blend of interviews, excerpts from Waszynski’s films and diaries, and more abstract visuals and sounds, giving the film and immersive, dreamy atmosphere. This is in keeping with the hard task of trying to comprehend currents of the director’s life, which followed not only the his private inner drives and passions, but also the larger patterns of twentieth century history, particularly the rise of the film industry, which in turn fuelled Waszynski’s own ascent. “He lived in a dream world,” one of Waszynski’s acquaintances says of him, “because film is a dream.”

Niewara and Rosolowski begin their story at its end, starting at Waszinski’s formidable Roman tomb before cycling back to trace his life from childhood. Structurally, the model for this kind of storytelling is Orson Welles’ “Citizen Kane,” which circles a powerful but enigmatic man who may be hiding his true self in plain sight. The filmmakers play detective, travelling to Israel where they speak with Waszynski’s distant relatives and to Moshe Waks’s hometown of Kovel, Ukraine, once home to a thriving Jewish population. By the time he established himself as a filmmaker in Warsaw, Waks had changed his name to the more Polish-sounding Michal Waszynski and converted to Catholicism. He was startlingly prolific throughout the thirties, making mostly elegant chamber dramas and comedies, though the “The Prince and the Dybbuk” doesn’t provide much information about the films with which he made his name. In any case, the war put an end to Waszynski’s time in the Polish film industry, though he stayed active, producing propaganda films for of the Polish army in exile. These activities took him through Egypt and, eventually, to Italy.

It was in Italy where Waszynski, depending on one’s point of view, either came into his princely own or utterly subsumed his identity. He managed to come under the protection of an older countess, whom he later married. The director’s life from here on out was anachronistic and epicurean, and what footage there is of him shows a man able to appreciate the finer things in life. It’s also at this point that we come to understand that his discretion might not have been without its purpose. Waszynski was gay, and the filmmakers have managed to track down a former boyfriend, who claims that the Prince, always one to value beauty, enjoyed being seen in Rome’s gay bars with such a handsome younger man. While the structure of “The Prince and the Dybbuk” recalls “Kane,” its content takes after Wes Anderson’s “The Grand Budapest Hotel,” a movie that achieves its effect through setting the flawed values of the old world against the efficiency and barbarism of the new. There’s a similar poignancy to the story of Michal Waszynski, dedicating himself wholeheartedly to the slightly absurd identity of Fake Prince. One interviewee describes him as “a born aristocrat, an aristocrat deep in his soul.” Another maintains, “he saw himself as Prince Waszynski.”

If “The Prince and the Dybbuk” casts Waszynski as a sort of Charles Foster Kane, it positions “The Dybbuk” as his Rosebud. Rooted in both Jewish folklore and ethnography, “The Dybbuk,” gave Waszynski an opportunity to return, at least artistically, to his origins. Niewara and Rosolowski try to present it as an implied skeleton key to its maker’s psyche, straddling as it does his Jewish heritage and artistic work. Visually, it certainly looks the part. With its vivid ethnic detail and ghostly imagery, it makes for a viable haunted presence in the director’s life. Its alternate title, “Between Both Worlds,” could certainly apply to Waszynski himself, though one imagines that it would have been similarly applicable to the community that he left behind.

Based on the famous play by S. Ansky, “The Dybbuk” employs Jewish myth to combine the supernatural with ethnographic detail. The film’s narrative centers on demonic possession. It begins with two yeshiva students, Nisn and Sender, pledging to marry their as-yet-unborn children. Nisn dies and Sender falls into avarice, failing to recognize Nisn’s son Khannon when he turns up years later. Khannon falls for Sender’s comely daughter Leah, turning to kabbalah’s dark side when her father pledges her to someone else. He dies, but his restless spirit possesses his beloved, sending her father to a famous rabbi for help.

Ansky was inspired to write “The Dybbuk” by his travels through the Russian Empire’s pale of settlement, particularly Podolia and Waszynski’s native Volhynia, studying traditional Jewish communities that were even then beginning to disappear. As such, the story is a peculiar blend of fantasy and studied ethnic color. The film’s most memorable scene focuses on Leah’s preparations to her wedding, following her and her family through the ceremonies, which climax with a kinetic, erotically charged dance between the bride-to-be and the town’s common folk.

“The Dybbuk” is firmly rooted in the pre-war Yiddish stage, giving it a different sort of documentary appeal for contemporary audiences. The cast was largely made up of members of the Vilna Troupe, an influential Yiddish theater company that gave Ansky’s play its premiere in 1920 (unlike their star-crossed characters, stars Leon Leibgold and Lili Liliana would later get together and move to the states, where they enjoyed careers in New York’s Yiddish theater). Consequentially, the performance style is mannered, even by the standards of the day, and the film’s pacing is somewhat ungainly. A severe, ubiquitous side character acts as a one-man Greek chorus, commenting on the proceedings in portentous tones. Still, Waszynski enlivens it with some nice gothic touches and, perhaps more unexpectedly, some pleasing pastoral passages as well. Music plays a prominent role throughout, giving the community a warm, vital voice.

The film’s climax comes in a fascinating ghostly courtroom scene orchestrated by the wizened Rabbi Azriel. Ansky was fascinated by the Hasidic way of life, and depicts their spiritual leader as a mix of judge, paternal peacemaker, and sorcerer. It’s indicative of the film’s larger idea of Judaism as a mediating force between the rational and the irrational, the spirit and the heart, and the individual passions and communal duty. Waszynski dwells on these tensions, giving them a not insubstantial erotic heat. One scene, in which Khannon invokes Satan while cleaning himself in a mikveh, observed through a steamed up window by a frightened classmate, is almost shocking in its frank homoeroticism. Likewise, Leah’s undaunted desire to offer herself to her dead beloved and Liliana’s performance or her speaking with his voice make for a stirring embodiment of amour fou. Azriel manages to exorcise the Kannon’s restless soul, but one gets the sense that there’s no getting rid of those simmering passions of spirit and flesh alike.

Perhaps for these reasons, “The Dybbuk” was singled out specifically by Joseph Goebbels, who led a campaign to have most copies of it destroyed. “The Prince and the Dybbuk” contains a passage of Waszynski’s search for prints of what is now his best-known work. Still, I’m not sure if it unlocks the secrets of its creator, the hidden part of his character that harmonizes his upbringing in Kovel with his grand Roman manor. The world of “The Dybbuk” was already undergoing irrevocable change by the time Waszynski was born into it. Unlike the many Jews cast out into modernity, he took refuge in a very different past, one whose bygone splendor was no less doomed. A true creature of the cinema, he lived in a dream world. Likewise, he was born into what must of seemed a dream world, and died in one too.

Daniel Witkin is a New York-based critic and filmmaker.