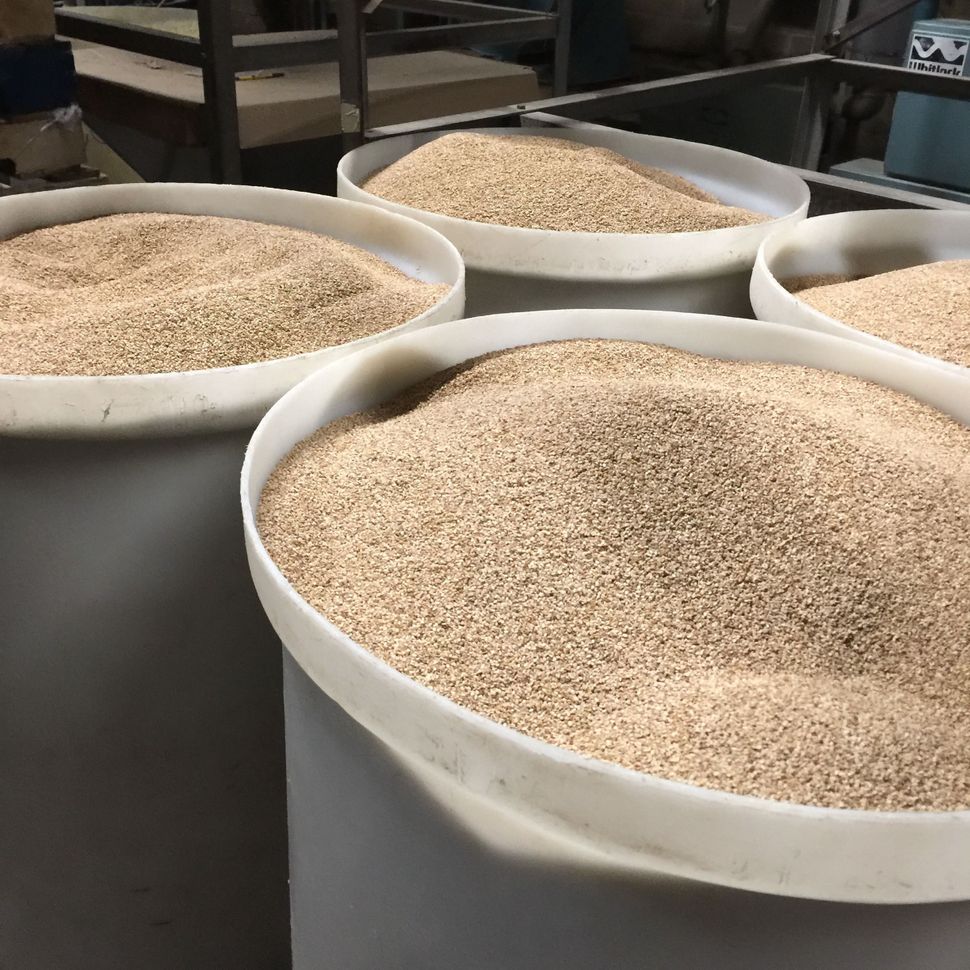 Joyva uses between 3 and 4 million pounds of sesame seeds every year. They mainly come from Texas. Image by Amy Oringel

My grandfather used to introduce himself this way: “I’m Danny Oringel and I’m in coffee.” He was from a time and place where you didn’t “work” at something, you were “in” something. My friend’s grandfather was in mattresses. Another was in meat. Over time, these businesses typically were sold or ceased operations as the younger generations reaped the benefits of their American upbringings and educations. For example, my father did not choose to be in coffee; instead, he got a Master of Business Administration, put on his white oxfords and tie every day and headed to his office at IBM. For 47 years. But what happens when the classic Jewish immigrant business story continues? Enter Joyva, the century-plus halvah mainstay, an inspirational tale that weaves family loyalty with hard work.

It’s not a great assumption to say that most of us would find working side by side with our closest relatives to be, well, challenging. For the Radutzky family, the opposite seems to be true. Nathan Radutzky came to this country from Kiev in 1907, armed with little more than a killer halvah recipe. He honed it while selling from pushcarts on Manhattan’s Lower East Side; then, in the late 1920s, he was able to build a factory in Brooklyn, where he produced a variety of flavors and shapes of the Old World sesame-based treat. Nathan and Rae Radutzky had four boys who, despite forays into other fields (son Harry gave medical school a brief shot), all decided to join the company.

Initially called Independent Halvah & Candies in the 1950s it was renamed Joyva (merging the patriarch’s granddaughter’s name, Roslyn Joy, with, yes, halvah) and branded with the Middle Eastern sultan logo that still adorns the Joyva packaging. Jelly rings and marshmallow twists followed, and when the candies were certified kosher for Passover in the 1960s, business officially boomed.

Family legend has it that the four Radutzky brothers, whose painted portraits adorn a wall of Joyva’s cluttered, unpretentious office in Brooklyn, experienced nary a squabble. Today Richard Radutzky, son of Milton, the youngest of the four brothers (and the last to pass away, in 2015 at age 93), and his cousin Sandy Wiener, grandson of Alex, the eldest brother, run Joyva.

“There was a culture of mutual respect in that we appreciated what they had built and they were proud that we weren’t a couple of young hotheads,” Richard Radutzky said. “Having us there just brought them joy. There was a lot of kvelling.”

While the staffing has changed and the average age of management decreased significantly, much of the physical operation has remained exactly the same. This is not a factory out of “The Jetsons”; it takes up over 100,000 square feet across four warehouses in Brooklyn’s East Williamsburg, and resembles a huge sheet metal mousetrap.

The 3 million to 4 million pounds of sesame seeds the company imports each year are sent through a multistage process that would make Rube Goldberg proud. The outer layer, or hull, is removed. The seeds are dunked in salt water, stirred in fresh water, fed into roasting ovens and, in the case of tahini, ground between hot stones. To make halvah, the seeds are ground up using a collection of gigantic mortars and pestles.

Radutzky and Weiner have tread cautiously when introducing new concepts. They successfully incorporated small technology upgrades (read: a fax machine), then for other advancements, like computers, software and customized billing.

“For a while there was an old-school versus new-school dynamic, but it’s not like there was palpable tension,” Radutzky said. “They were content, but we wanted to be a little more ambitious.”

It seems as though the Radutzky clan turned out not only halvah but also mensches. Nathan Radutzky was one of the original founders of what is now Brookdale Hospital, in Brooklyn’s Brownsville (home of the Radutzky Emergency Care Pavilion). He also helped to found the Yeshiva of Crown Heights. More recently, when Richard Radutzky discovered that a new local company called Seed + Mill was making artisanal halvah, he reached out to them to give advice.

Seed + Mill founder Lisa Mendelson said: “When Richard first called I was a little surprised, but it takes just two minutes to realize he’s this warm, genuine person. And Sandy is, too. They are too good to be true; I found myself thinking there has to be a catch.”

While Joyva could never be mistaken for a cutting-edge company, Radutzky and Weiner have been successful in promoting new takes on their very Old World products. Jelly rings are now sold in snack packs for school lunches. And “nana candy,” the plastic-wrapped sesame seed hard candies your grandmother kept in a cut glass bowl, can now be found at Dylan’s Candy Bar and alongside Swedish fish and Smarties at bulk candy shops.

“People are more receptive than ever to products that are a little outside the box,” Radutzky said. “But success only comes if your company can deliver on taste, a compelling story and ethical practices. Just by virtue of who we are, Joyva reflects all of the above. It’s in our blood.”