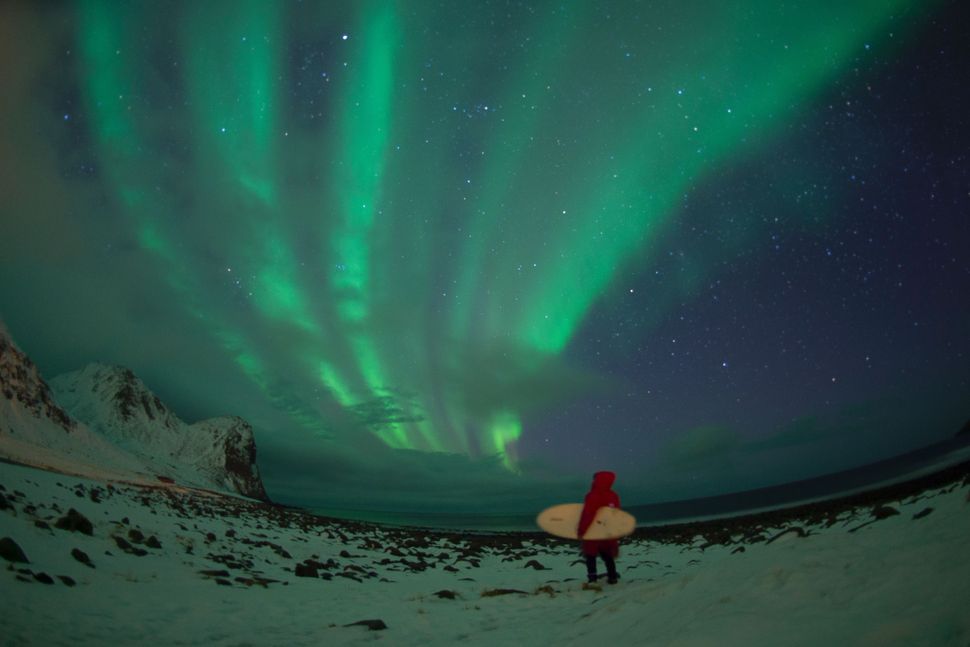 Aurora Borealis as seen from Norway Image by Getty Images

Well, we know why President Donald Trump wondered aloud why more people from Norway don’t emigrate to the United States in comparison to those from “shithole” countries in Africa and Latin America. It’s because only the day before Trump had met with Erna Solberg, the prime minister of Norway. The president’s attention span is notorious for lasting as long as whatever bright, shiny object passes by at the moment. Apparently, for him, the blonde, blue-eyed Erna Solberg was the bright, shiny object.

Never mind that just last year, Norwegians ranked number one on the World Happiness Report, while already holding the top spot on the Organisation for Economic Co-operation and Development’s Better Life Index. That, for one, just might explain why Trump’s would-be Norwegian immigrants are staying put right where they are, forsaking the American dream of no health insurance and multiple firearms for everyone.

Of course, more generally, we understand that coming out of Trump’s white-supremacist mouth, “Norwegian” is a code-word for white. Nay, not just white, but Aryan, in the Hitlerian sense of the term. It must just really burn his britches that the vast majority of immigrants from the United Nations of Shithole vying for entry to the United States don’t look like him. Some have brown eyes, brown skin, dark hair. You know the type: drug dealers, terrorists, rapists and murderers.

It’s funny that Trump picked on Norway of all the Northern European nations, a nation that has its own history of banning immigrants — especially Jews. Other than for a few select refugees from the Spanish Inquisition whom the rulers of Norway deemed valuable due to their connections in international trade and finance, by royal edict, Norway was basically judenrein from the Middle Ages until the mid-19th century.

Not even the establishment of a constitutional democracy in 1814, patterned alongside that of France and America, brought about a change in the Lutheran-inspired law prohibiting Jews from being in Norway without permission for more than 24 hours. It took decades of campaigning by Norway’s national poet, Henrik Wergeland, to convince the Norwegian parliament to overturn the centuries-old rule banning Jews from settling in Norway. The ban was finally overturned in 1851. (To this day, Oslo’s small Jewish community pays its respects to Wergeland, laying a wreath on his grave every May 17 – Norwegian National Day.)

Not that Jews poured into Norway the very next day. Ninety years later, when Hitler’s army rolled over Norway’s measly military in 1940, only about 2,000 Jews had settled in Norway, some with Sephardic roots and several hundred whose ancestors had fled pogroms in the Pale of Settlement.

Nevertheless — and with the aid and abettance of the man whose very name became a synonym for collaborator, Vidku Quisling — the Nazi occupiers did their best to restore Norway to its pre-1851 state, deporting about half the Jewish population to Auschwitz. With the aid of the Norwegian resistance, the other half fled over the border with Sweden, which fortunately for them had not constructed a big, beautiful border wall. This time around, church leaders in Norway were loudly outspoken against the deportation of Jews, but like the Pope himself, they lacked the legions needed to stand up to the German army. Quisling, at least, wound up tried and executed after the war.

So it’s hard to know exactly to whose Norway Trump was referring. To Wergeland’s or to Quisling’s? To the medieval kings of Norway dedicated to keeping their land free of Jews, or to the members of the Norwegian Nobel Committee who awarded peace prizes to the likes of Elie Wiesel, Menachem Begin and Anwar Sadat jointly, and to the troika of Shimon Peres, Yitzhak Rabin, and Yasir Arafat, in the wake of the very Oslo Accords their city secretly hosted.

OK. It’s not really hard to know. That was just a rhetorical exercise.