Mathilde Krim Was The Oskar Schindler Of The War Against AIDS 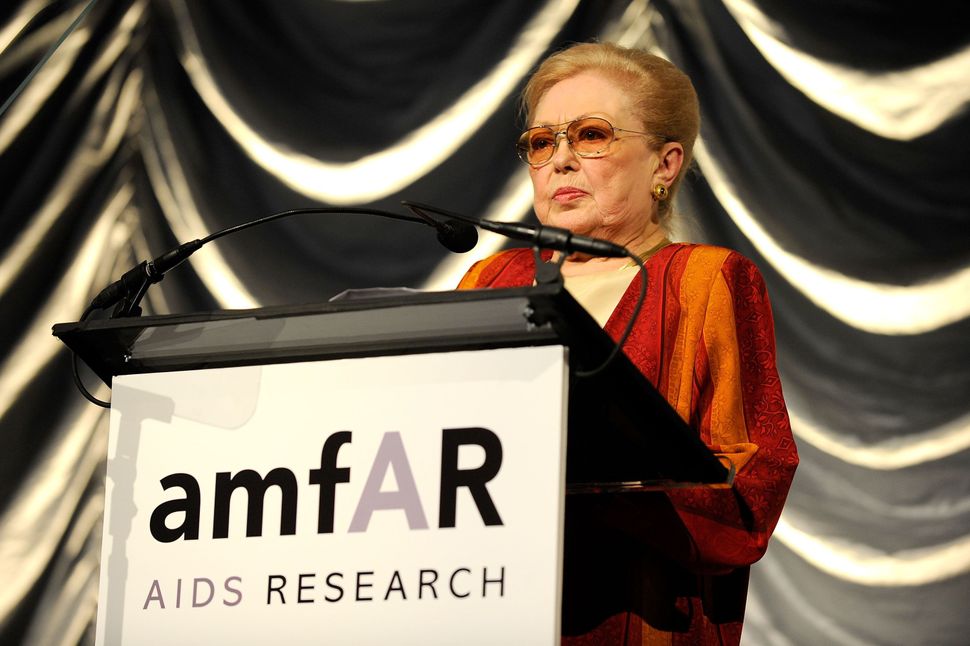 Oskar Schindler is celebrated for saving the lives of 1,200 imperiled people, so how can one begin to describe the achievement of Mathilde Krim, who by most accounts helped to save the lives of millions? The dauntless advocate of AIDS research, prevention, and treatment who died on January 15 at age 91, was motivated by tragedies of modern Jewish history. Born to a Swiss Protestant father and Italian Roman Catholic mother, she studied biology in Geneva during World War II while working part-time in the office of a Swiss Jewish lawyer. There she became aware that Switzerland, like most other countries, was refusing to issue visas to Jewish refugees desperate to escape Fascist Europe. When the war ended, she saw a newsreel about concentration camps and the fate of those who had failed to obtain entry visas.

As she told The New York Times in 1988, she had been aware “that there was a good deal of anti-Semitism in Europe. My parents were no worse than the others, but they were like the others…The idea that people of my society were responsible for [the Holocaust] — it was very shocking to me. And I became very interested in knowing who were those Jews whom everybody had been after.”

Krim met some Jewish students at the University of Geneva in 1945, and was drawn to the cause of the new state of Israel. Having missed out on the anti-Nazi resistance, she took the opportunity to work to prevent future genocide by helping to smuggle weapons from former French resistance fighters to the Irgun. She converted to Judaism and married David Danon, a Romanian medical student who had made aliyah. After she earned her PhD in biology from the University of Geneva, the couple relocated to Israel where she became a researcher at the Weizmann Institute of Science. Before long, she had separated from her husband, but her dedication to her work and Eretz Israel continued. She was assigned to the laboratory of Professor Leo Sachs one of Israel’s first geneticists, who pioneered prenatal diagnosis of human diseases. Working in the field of what would later be called medical genetics, Krim also researched cancer-causing viruses.

In 1957, she married Arthur Krim, an American Jewish entertainment lawyer and trustee of the Weizmann Institute, as well as longtime chairman for United Artists and Orion Pictures. Krim’s clout in Hollywood was rivalled by his influence in Washington, where he advised presidents, especially Lyndon Baines Johnson, who became a friend. Mathilde Krim, with her cosmopolitan background and style, fit into this world usefully. She continued scientific work, where her research on interferon, a family of related proteins, as a potential cancer treatment, was not successful, but gave her powerful experience in healthcare funding.

In the early 1980s, based at Memorial Sloan-Kettering Cancer Center in New York, she heard about a new viral disease, later called AIDS. Because it appeared to chiefly affect disrespected minorities such as intravenous drug users and gay men, Krim immediately sensed a displaced, dismissive tone of morality about the disease, even from health experts. As Dr. Kenneth Mayer recalled in a 2006 tribute to Krim in AIDS Patient Care and STDs she informed him about her experiences “growing up in Switzerland in the Nazi era, and her revulsion at the failure of civil society to mount an effective response to the racist and genocidal policies of the Hitler regime… It was clear to [Dr. Mayer] that the same hatred of injustice that impelled Dr. Krim to reject Nazism led her to become an outspoken advocate as people became sick with AIDS.”

Krim’s political and cultural connections soon became essential for the public health campaign she began to wage, although refusals to help were many. In the same publication, Dr. Jeffrey Laurence explained: “The responses of many individuals, and political leaders, often reminded [Krim] of fascism and Nazism.” Her scientific experience increased her resolve. Krim knew that AIDS infections would spread beyond the minority populations affected early on, and according to the World Health Organization, over 70 million people have been infected with the HIV virus, of whom about 35 million have died of the disease.

For Krim, the crime of doing nothing when human lives are in peril was a lesson already learned during the Holocaust. Yet, as she repeatedly commented, Ronald Reagan waited for six years after the outbreak of the AIDS epidemic to mention it once, ineffectually, and never spoke of it again. As a private citizen, Krim cofounded and helped fund the AIDS Medical Foundation in 1983, which later became the American Foundation for AIDS Research (AmFAR), backing research and promoting life-saving prevention policies — opposed by religious extremists and social conservatives — such as condom distribution in schools and needle-exchange programs. She took pointers from Mary Lasker, wife of the advertising kingpin Albert Lasker, a champion of funding cancer research, as medical historian Renilde Loeckx has pointed out. David France, in another account of the AIDS pandemic, echoed that Krim “consciously modelled” her work on the refined precedent of Mary Lasker, the ultimate Park Avenue denizen.

Outwardly Krim retained “quiet dignity,” according to historian Arthur D. Kahn but inside she was on fire. She told Technology Review in July 1992: “What enrages me is that we had evidence in 1982 of what we were dealing with, a disease transmitted through sexual relations and blood. From that time, we could have said “watch out” — but we didn’t. In fact, the first federal pamphlet on AIDS, written by then-Surgeon General C. Everett Koop, was issued in 1986. And you could obtain that pamphlet only by requesting it: there was no budget for distribution… I resent it that President [George H. W.] Bush has abdicated his responsibility in this situation… Mr. Bush could say to drug companies, “This problem puts everyone at risk. Tomorrow it could be your children or grandchildren. Those of us who have resources and scientific and technological know-how have an obligation to become involved in HIV research.”

As political leadership went from bad to worse, Krim labored on, using her husband’s Hollywood connections to enlist an array of stars, most notably Elizabeth Taylor, to campaign for AIDS treatment and prevention causes. In the 2006 tribute issue of AIDS Patient Care and STDs the playwright and novelist Larry Kramer, who sometimes feuded with Krim, summed up her achievement and approach: “Mathilde would never ever say publicly anything as impolite as I might have said about her. She is a true lady. How she has remained a true lady after all these years of such awfulness and distress and lying and cheating by our governments, causing intentionally so much death, is an accomplishment of the highest order which I am only coming to appreciate… I learned from Mathilde about her participation in the war to create the state of Israel… Dr. Mathilde Krim, this petite and almost unassuming woman, has fought like a tiger in two of the twentieth century’s premier battles, indeed gave of her life to fighting them, one can only be filled with overpowering awe and gratitude that such a person has lived among us.”

Mathilde Krim Was The Oskar Schindler Of The War Against AIDS