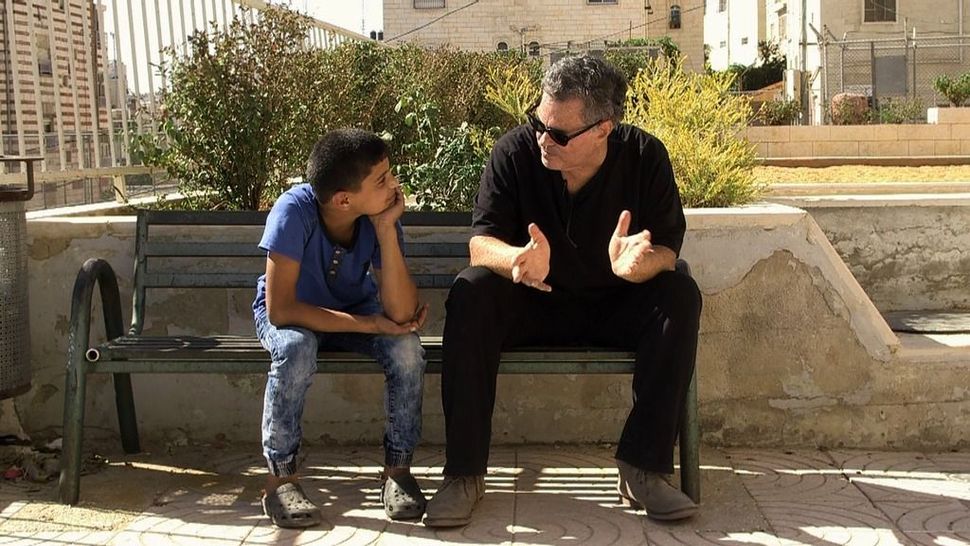 It’s often said that Jews are a particularly talkative bunch — “the most verbal group in human history,” according to Alfred Kazin in his 1969 review of Philip Roth’s “Portnoy’s Complaint,” itself a work of Semitic logorrhea par excellence. This is a pervasive idea, based on a certain reading of Jewish history. In the beginning there was the word, or so the story goes. From there, Jews spent millennia debating the subtlest nuances of their sacred texts, a behavior that has now evolved into heated, dining room arguments in which the generations talk over each other, debating politics, baseball, the sexual habits of the young, or anything at all, so long as it stimulates the brain and accelerates the pulse. For my part, I’m skeptical that this sort of verbal jousting is somehow a particularly ethnic phenomenon, and yet my own experience does force me to note a certain passion for heated exegesis among my Jewish friends.

Jewish conversation, friendly, awkward, or contentious, drives two new documentaries playing in New York this week. “My Coffee With Jewish Friends,” the new work by indefatigable New York documentarian Manfred Kirchheimer – his friends call him Manny – is currently playing at the Lincoln Plaza Cinemas, making it one of the final films to play at that longtime Upper West Side standby before it closes permanently at the end of the month. Nearby, Israeli filmmaker Amos Gitai’s “West of the River Jordan” will have its North American premiere at the Film Society of the Lincoln Center on Tuesday as part of the New York Jewish Film Festival before opening downtown at the Quad this Friday.

Both films are driven by interviews with largely Jewish subjects (though Gitai’s film crucially includes a substantial number of Arab voices as well), who give their thoughts, insights, and opinions on the questions of the day. Kirchheimer’s focus is on American Jews, through the rather broad question of what being Jewish means to them. As the impetus for this project, he cites the low-key but unsettling realization that, “When asked what came to mind when I heard the word ‘Jewish,’ I didn’t know what to say.” In contrast, Gitai’s project is more directly political, an investigation of the Israel’s continued occupation of the Palestinian territories and the reasons that peace has been obstructed. As the film progresses, we see that Gitai has some answers of his own, though he’s not so taken with them as to lose interest in the ideas of others.

Structured around interviews and arguments, both “My Coffee With Jewish Friends” and “West of the Jordan River” skirt the border of what has come to be derisively called the “talking head documentary.” Yet while this term connotes something sterile and expository, both films have a loose, conversational character that contrasts with the dutiful didacticism of the typical issue-oriented film. The heads do talk, but one’s always aware of an interlocutor behind the camera, occasionally shown, but always ready with a challenge, interjection or inside joke.

“Wait a minute, I’m part of this conversation too,” Kirchheimer pipes up in a tense moment in his film. He’s a sharp but unassuming presence in his own movie. In addition to being the director, he’s also a performer of sorts and the glue that holds the project together – along with their Jewishness, what the subjects have in common is some relationship with Manny himself. Accordingly, the scope of the film is patently too circumscribed to function as a comprehensive overview of Jewish, or even Jewish-American identity. The voices are drawn largely from Kirchheimer’s rather rarefied Manhattan intellectual milieu, offering a particular range of thoughts about religion, culture, politics, and other hefty themes (accordingly, the film does offer a revealing study of the ways well-off East Coast Jews of a certain generation decorate their apartments). However, Kirchheimer’s approach does make for a rather productive amiability. The filmmaker’s obvious rapport with his subjects — per the title, his “Jewish friends” — allows for an ease and depth of conversation. 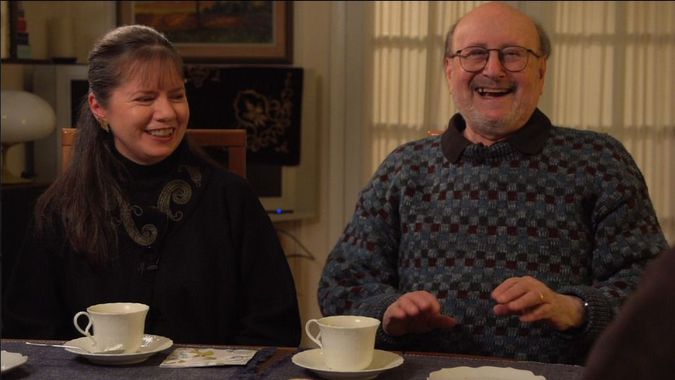 Kirchheimer’s pre-existing relationships allow him to explore his concerns more deeply, nonchalantly venturing into weighty religious and even theological questions. Many of Kirchheimer’s peers have had a shifting, searching relationship with faith throughout their lives, the filmmaker included. Kirchheimer’s family fled Nazi Germany when Manny was a child, settling in the accomplished German-Jewish community of Washington Heights, which has been dubbed Frankfurt on the Hudson. Raised in this progressive milieu, Kirchheimer surprised his parents by converting to Orthodoxy, eventually settling into what might be called an inquisitive Atheism. One of his friends, Tom Hurwitz, now happily religious, speaks of being told as a child, “We don’t do God in this family.” Another invokes the Catholic idea of the Mysterium, which he defines as “Something we can intuit but not comprehend.” Not all of his peers have come around on religion: A nice older lady counters her husband’s spirited enthusiasm for the Jewish faith by declaring, “When I go to synagogue, I get nothing out of it except wishing it was over.”

Unsurprisingly, the conversations become truly heated only when they turn to politics. For the most part, Manny’s Jewish friends tend to lean left. Even the movie’s representative of organized religion, a young female Rabbi from an Upper West Side synagogue, proudly speaks of participating in progressive rallies. But we nevertheless see the schismatic role that politics plays among contemporary Jews. Tom Hurwitz, whose filmmaker father was blacklisted for his leftist views, describes a conservative turn that overcame the Jewish community after the ’67 war, still unable to fully stifle some vestigial feeling of horror. On the other side of the political spectrum: Kirchheimer’s avuncular dentist glares at him smugly while chiding him for “not understanding the Arab mind,” striking that familiar posture of vacuum-sealed certainty that so often accompanies expressions of racism. When pushed to express how he really feels about Palestinians, an Israeli conservative gives a dispiriting but predictable response: “Fuck ‘em.”

If the divergence of opinions regarding the Jewish state and the occupation present one source of disagreement in “My Coffee With Jewish Friends,” it’s the explicit subject of “West of the Jordan.” The film sees Gitai return to the West Bank, which was also the subject of his 1982 film, “Field Diary” (his new movie is given the subtitle “Field Diary Revisited”). Rather than attempting to construct either a narrative or a comprehensive argument about the occupation, Gitai talks to locals who have some involvement in the ongoing conflict.

Despite its reliance on other voices, Gitai’s own thoughts play a considerable role in the movie. As is the case with Kirchheimer, Gitai’s politics lean liberal, and many of the film’s subjects are luminaries of the Israeli left. The most engaging people are often the activists, who experience the chaotic liminal spaces of the occupation. These include figures from better-known human rights groups like B’Tselem and Breaking the Silence, but also less prominent figures as well. One particularly memorable moment takes place at a group for both Jewish and Arab women who have lost loved ones (usually, it seems, men) to the conflict. We see some women grown wise from advanced age and some still coming to terms with recent traumas. Overall, it’s a scene of immense grief with a glimpse of furtive hope.

For the most part, though, “West of the River Jordan” is a realistic movie, and hence one that doesn’t suggest that the situation will get better anytime soon. What broader vision Gitai has is rooted in his own politics and experiences. To get a more specific sense of what these are, the film is bookended by an interview Gitai conducted with Yitzhak Rabin, giving the peace-seeking Prime Minister a position of privilege within the film, and his assassination looms over the entire film. Multiple subjects lament the lack of an equivalent figure in Israel today, a leader both willing and seemingly able to make peace happen. Instead, as a representative of Breaking the Silence would have it, “Our government is insane. Crazy young settlers run the country.”

Most of the people interviewed in “West of the River Jordan” genuinely desire peace, and it’s perhaps because of this that those who don’t become particularly memorable. In one fiery scene, Tzipi Hotovely, Israel’s young Deputy Minister of Foreign Affairs, refuses to allow Gitai to get a word in edgewise, torpedoing the filmmaker with a breathless monologue about Israel’s mystical, unqualified right to the land, as if growing progressively more intoxicated by the fumes of her own ideological ardor. But the film doesn’t pin the conflict wholly on hardline Israeli nationalists. In the film’s most despair-inducing scene, Gitai interviews a small boy whose sole dream is to die a martyr’s death. Gitai makes an attempt to get him to reconsider, telling him again and again that life is good. The child grants his point but is undeterred.

Between them, “My Coffee With Jewish Friends” and “West of the River Jordan” show some of the many ways that modern Jews are responding to the biggest issues in their community: religion, politics, culture, all orbiting the eternal question of identity. And, regardless of where one stands regarding assimilation, cosmopolitanism, and tribalism, both films contain views that they may deem laudable in close proximity to some they find irredeemably foul. Between them, the films raise the question of what effect these divides will have on the Jewish community going forward, or how much relevancy is left in the idea of a coherent Jewish body, addressing its conflicts in the way of a talkative global family. At the end of his film, Kirchheimer quotes an old joke: “Where there are two Jews, there are three opinions.” It’s equal parts an attempt at summation and a surrender to the impossibility of any such thing.